When I met him, the first question I asked of world renowned Egyptian indigenous wisdom keeper, Abd’el Hakim Awyan (1928 – 2008), who later became my father in law, was: “What do you think of all the hype about 2012? His answer brought a smile to my face.

“2012” he said, “Means nothing!” However—when questioned further, he replied that it was a popular marker to describe the shifting life cycles of our planet, and more… He said that we would experience a “great awakening” that he insisted was a natural process that had already begun.

Several cycles are beginning and ending all at the same time—like an odometer resetting itself. This is what the Mayan Calendar is telling us, in my opinion, and this is the information the indigenous Egyptians say the ancients passed down to them. It doesn’t happen all at one moment, or during one 24 hour cycle.

Hakim and other indigenous Egyptians speak about five continuing cycles of existence that continue to repeat themselves over and over again. He would often exclaim: “There’s nothing new under the sun!” implying that, in a reality of no time or death, everything exists, and always has—in the present. Everything is in a constant state of transformation and exists as an ever spiraling, cyclical and holographic matrix.

The very ancient Egyptians viewed “existence” on Earth as cycles of emergence and growth, retreat and rebirth, spanning hundreds of thousands of years and more. Their conception of our sun’s daily journey through the sky was applied to the process of growth and decline, light and shadow, and the appearance and gradual withdrawal that they saw occurring over many solar years in the life cycles of individuals, civilizations and with all that exists in the universe.

The ancient Egyptians viewed the star, Sirius as a giver of life, as it always reappeared at the time of the annual flooding of the Nile. These flood waters deposited rich dark silt on the banks of the Nile (which is why they named their land “Khemit” or the Black Land) that provided the ancients with bountiful harvests. When the star sank in the west and disappeared from the night sky, it remained hidden for 70 days before emerging again in the east. These were perceived as moments of ending and renewal. In fact, the Khemitians (who Hakim called the very ancient and highly sophisticated, pre-dynastic Egyptians) never spoke of death —but, rather of “westing”, reflecting the paths of our sun and stars. They knew that we are ultimately immortal, and are in a constant state of change…or transformation.

The Egyptian five-pointed star represents the five elements of Earth, Water, Fire, Air and Ether. It also represents five stages of the sun during the day. The Netert (Egyptian goddess), Nut, personified the sky, and below you can see her give birth to the sun, symbolized as “Kheper”, the winged scarab. You see the sun making its journey through her body (the sky) until she swallows it again at night. 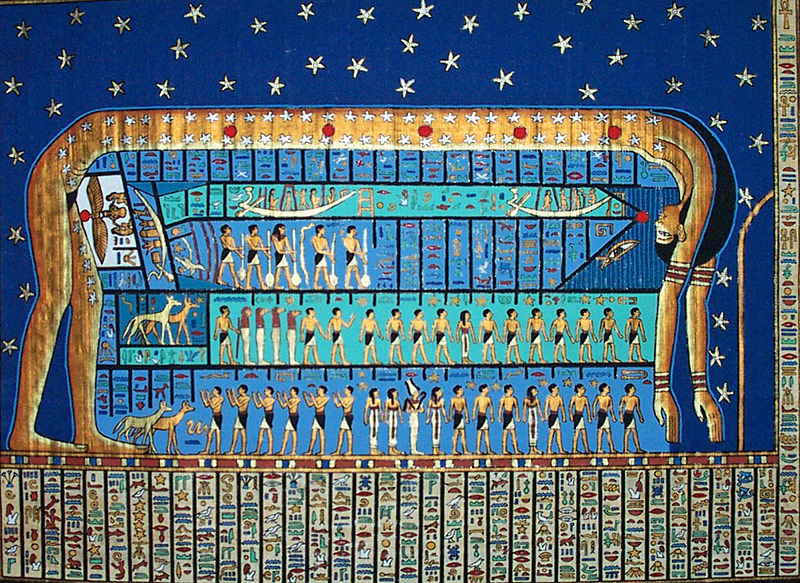 The five stages of the Sun’s journey, which also represented the stages of humanity’s developing consciousness, symbolized in the papyrus painting of the Sky Neter Nut above, were:

KHEPER, “ The Driller”, symbolized by the winged scarab.

Kheper is the form the sun adopts at dawn. In hieroglyphics, the title has one glyph: the scarab beetle. It was used to represent three consonants:  hpr. The exact translation of the word is illusive. One could literally translate it as coming to existence, to become, or to be. It expresses the idea of birth, transformation and becoming. 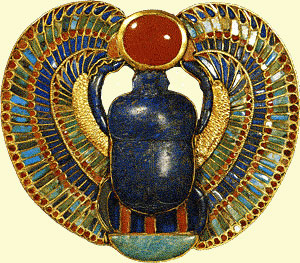 The scarab is a type of dung beetle common throughout Egypt. We know that the ancients were acutely observant of their natural world, and it was no accident the Scarab became symbolic of a cycle of change and awakening.

The scarab’s ritual of laying its eggs in animal dung was studied closely by the ancients. Its habit of rolling up this dung into spheres and pushing it across the ground, laid the groundwork for the perception of a gigantic scarab rolling the Sun before him across the sky. The hatching of these eggs from this dark and “hidden” environment into the light, lead the ancient Khemitians to associate the Kheper with renewal, rebirth and ascension.

As we move into our New Dawn of existence—we will lose the dualistic characteristics of a third dimensional polarity and we will obtain our higher or multi-dimensional wings!

Ra, "The Stubborn" is the impetuous youthful male. Often linked with Aries the Ram, Ra represents an stage of increased learning and development. The sun is moving higher on its path across our heavens and we move into higher levels of awareness and frequencies of existence.

Oon (from which our word “noon” was derived) is “The Wise One“. The Sun is at the zenith or at its strongest. By this time we have advanced greatly, and are beginning to regain the use of up to 360 senses. The wise ones are living in a higher dimension of reality and are enjoying an inner peace and resonance with their natural environment.

Aten is “ The Wiser”. The Sun has reached its maturity, in middle to late afternoon. We attain the highest state of being, consciousness and wisdom that can be achieved on Earth. We are at our peak technologically and spiritually, and have achieved a full understanding of our “oneness” with all that is.

As Amen or Amun, the Sun becomes “The Hidden" again, is swallowed by NUT and vanishes. This is the age we have been experiencing for centuries. During this stage, we devolve into a three dimensional, dualistic world of polarities, and the truth of our oneness and self empowerment becomes hidden or veiled from us.

The first four stages represent enlightened times on earth or Golden Ages. We live in higher frequencies, and have access to more senses and possess what we would call today, godlike or supernatural abilities and qualities. These are stages leading to an enlightened time on Earth when people live in peace and prosperity.

The indigenous teach that we currently exist in and are moving out of the Cycle of Amun. We have fallen into a Dark Age and a lower dimension of beingness—the polarized existence of a three dimensional reality. The truth of our unlimited potentials have been kept from us, as we navigate this dualistic world of dark and light energies, harboring feelings of separation from a “God” or creative force, and from each other.

Cycles within Cycles… Is there any significance to the date December 21, 2012?

The ancient myths were often re-told, distorted and misinterpreted by the priests and others over the years to support new or personal agendas. However, the ancient symbols and myths, when studied with this in mind, contain many secrets and hold many levels of meaning! The well known myth of Osiris, Isis, Set and Horus also speaks to the knowledge of these infinite cycles when looking at it from an entirely different perspective.

In the famous legend, the Neter, Set, possessing the dualistic qualities of a three dimensional life force, becomes jealous of Osiris’s shining light and attacks, and eventually dismembers him into 14 or 42 pieces (depending on the version), symbolizing the separation of mankind. Isis, searches for and finds the pieces of Osiris, except for his phallus, which has been eaten by fish (reflecting the end of another cycle or the beginning of Age of Pisces, in this telling of the myth). She fashions a new phallus and magically copulates with Osiris during the Spring Equinox. Isis represents the star Sirius and is associated with all the abundance and creation of new life that the rising of this star signaled to the ancients. This virgin coupling with Osiris results in the birth of the Son/Sun, Horus, who is born nine months later, during the Winter Solstice on December 21, representing the beginning of a new cycle—the ascension of mankind! The ancients celebrated the Equinoxes and Solstices as markers of new beginnings, just as we do today. In this interpretation of the myth, Horus, the Sun or Son, becomes the re-born Osiris, the hero that meets the challenges of the Dark Age and rises again, shining his light on the horizon and revealing a whole new cycle of existence and consciousness! 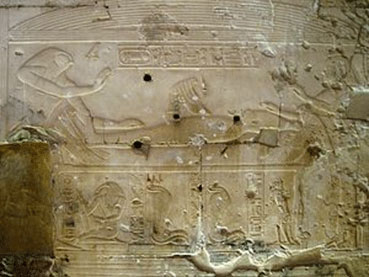 Depicted on a wall of the Set I Temple at Abydos- Isis, in the form of a bird, copulates with the deceased Osiris

The recent “People’s Revolution” in Egypt is the beautiful reflection of a huge Global Awakening here on Earth. The people of Egypt came together to stand up for their basic human rights—and their efforts resulted in an enormous revelation of wide scale corruption throughout all levels of their government and industrial hierarchies. The world watched as Egypt’s people, as peacefully as possible (with the opposition perpetrating violence and looting to mislead the media and public opinion), successfully effected massive change in Egypt in just 18 days! Their initial victories garnered support for similar causes worldwide –and in a quantum existence, our “hundredth monkey” was reached. Internationally, people began to see the now thinly veiled corruption in their own back yards at an escalated pace. Occupy Tahrir Square—became Occupy everywhere. Energies have been set in motion for huge shifts in our reality.

We are leaving the “darkness” behind and entering into a New Dawn or the Age of Kheper. With this, come higher levels of awareness as we begin to enter into higher dimensions of existence. The veil is being lifted, and the game of the polarities is coming to a close. As with most growth and healing, there may be many hurdles to overcome as our Earth goes through a form of purification. However, this is all part of the process during this exciting time to be alive! 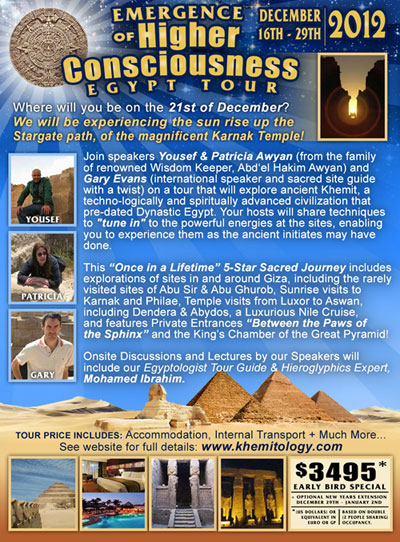 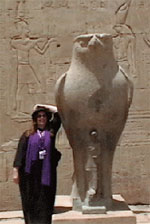 From a very young age, Patricia knew that she would one day be “going home” to Egypt. Having been born with a “need to know”, she has spent much of her life on a personal quest for knowledge, wisdom and spiritual fulfillment. Patricia’s strong and vital connection to Nature and interest in the mystical and physical sciences propelled her into a lifelong study of the ancient mysteries.

As a long time student in metaphysical, spiritual and esoteric subjects and traditions, Patricia’s eclectic spiritual background serves as a strong foundation to support to her work. She became of student of Khemitology after meeting world renowned, indigenous Wisdom Keeper, Abd’el Hakim Awyan (1926-2008), on her first trip to Egypt in 2005. It was during her third journey to Egypt that she would meet, and fall in love with her husband, Yousef Awyan. Together, she and Yousef created The Khemit School of Ancient Mysticism as an open forum to share the teachings of his father, Hakim, and to continue on with the exploration and research of the ancient mysteries, both on and off the sites. They guide independent explorers that come to their doorstep from all over the world, and host their own tours several times each year. News of their activities can be found at: www.khemitology.com and on their very active Facebook group page.

Patricia’s focus has been on relating the secrets, symbolism and mysteries of the ancients to the shifting energies of our current reality. She lectures and has created online lessons that speak of our eternal cycling through golden and dark ages, and how the evidence left behind, by the very ancient Khemitians (Egyptians), portrays a civilization that far surpassed our own both technologically and spiritually. Much of what we think is REAL is an illusion. However, the illusion serves to challenge and inspire us to grow and increase our own levels of awareness– and to remember how to live resonantly with our natural world. Patricia illustrates how the ancients left us a blueprint that maps out the truth—of the beauty, perfection and infinite possibilities that exist and are reflected within and without every one of us – if we are willing to view our world from a higher perspective, as symbolized by the eye of Horus.