Other Mysterious Underwater Ruins of Japan Different views of the stone circles, or ‘labyrinths’ of Kerama, at depths between 27 and 33 metres. It has not yet been determined whether these are natural phenomena or structures that were worked by some ancient people when this land was last above sea-level about 10,000 years ago. Compare picture 1 with the final picture in Underwater Gallery 5: Bimini: The Road Underwater. 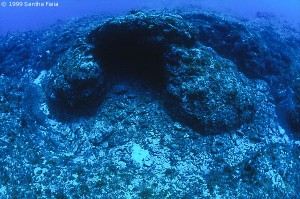 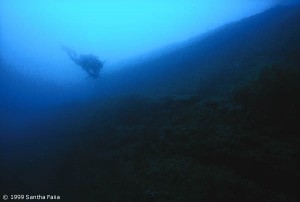 Side view, in poor visibility, of one of a series of 'step-pyramids' at between 15 and 30 metres underwater off Chatan on Okinawa main island. Further investigation needs to be done to establish whether these are natural geological phenomena. If they are not natural then are they genuinely ancient structures or could they be the result of modern quarrying, dredging etc? Man-made circular holes found on the summit of a small sea mount between 5 and 20 metres under water off the coast of Aguni. There has been speculation that these holes may have been wells, when the summit of the sea mount was above water. But offshore islands were often used as burial places in ancient times and I suggest that these holes are more likely to have been shaft graves – their contents long-since scoured out by the waves, of course, after the oceans rose. This would explain why some have two ‘chambers’ – one vertically downwards, and one horizontally to the side – the simplest way to accommodate a second burial in the same space without disturbing the first burial. Different views, with diver for scale, of curious horseshoe-shaped indentation cut into the vertical wall of one of the ‘step pyramids’ of Chatan.