Author of the Month :  The Official GrahamHancock.com forums
Join us at this forum every month for a discussion with famous popular authors from around the world.
Welcome! Log In• Register
Go to: Forum Home•Board•New Topic•Search
Re: The Orion Geo-Stellar Fingerprint Removed
Author: Ahatmose ()
Date: February 15, 2012 02:50PM
Once again I will post Petrie's results. 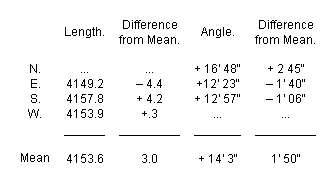 I find it amusing that Petrie could measure the entire Giza complex from north to south with minimum errors but was unable to measure accurately the smallest of the three larger pyramids being out between 2 and 10 feet.

... What, then, is to be reckoned as the size of the true base of the Pyramid? Not the present edges of the granite, for they are utterly rough. And not the ends of the fine-dressed edges of the joints, for they end at various levels. But looking to the fact that all the courses of granite are intended to be equal, and a rather short two cubits each, it seems most suitable to take a mean of all the granite courses (since the upper are not thinner than the lower ones),and reckon the intended base of the Pyramid at one mean course height (40.3 ± 1.5) below the first joint. Remembering also that the Second Pyramid courses average two cubits each near the base, and the bottom course was just two cubits above the pavement. ... [www.ronaldbirdsall.com]

I repeat and will go on record as stating categorically that Lehner is WRONG !!! I mean just look at his ridiculous baseline he used and called it The Lehner Line. Absolutely ridiculous ... if you know anything about surveying, which I do having done it for a living for 8 and 1/2 years.