Author of the Month :  The Official GrahamHancock.com forums
Join us at this forum every month for a discussion with famous popular authors from around the world.
Welcome! Log In• Register
Go to: Forum Home•Board•New Topic•Search
The Olmecs
Author: thinkitover ()
Date: September 03, 2021 03:54AM
Hello again, Alexandros (and all)!

I notice in your book it seems that you cite the facial characteristics of the Olmec heads as being characteristically African and indicative of prehistorical transoceanic contact, I believe?

I think nowadays we can "get in trouble" for doing that? People have produced things like these 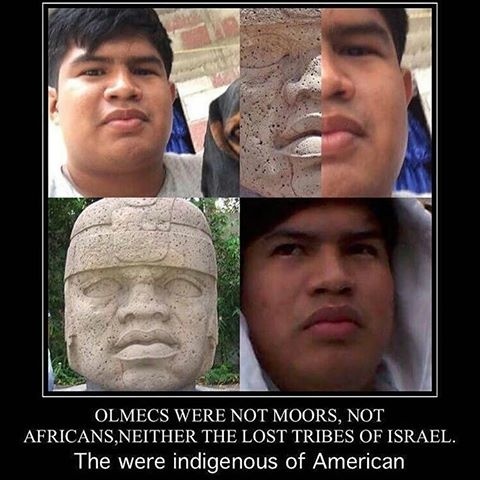 Sometimes I think it is insinuated that regarding the Olmec heads as evidence of contact with Africans (or aliens) is depriving native Americans of credit for their own culture and the pride associated with it.

I acknowledge that it is possible to get carried away and give too much credit to African visitors for bestowing civilization - Afrocentrism - but I am not otherwise much in agreement with any of that. Native Americans have traditions of pre-Columbian visitors from the East including bearded Caucasians, and characters wearing beards or false beards appear in many of the Mexican Codices. I may not agree that they were civilized by Caucasian visitors either but I don't think it is outsiders who started the stories of pre-Columbian visitors.

I apologize for bringing it up because in a way, I think it's rhetorical anyway. It's not as if the Olmec heads are the only evidence of pre-Columbian contact by any means.

The way I think of it, as far as the features of the Olmec heads they could perhaps be African or native, but what for me tries to tip the scales in favor of African visitors is again the traditional tales of visitors, and the appearance of different aspects of culture at about the same time as the Olmecs - pyramids, hieroglyphic writing including the cartouche, parallels in symbols and myth, and etc.

I also think there is a certain relentlessness to them and the sort of faces they have that seems to refer to people who are special in some way, such as either rulers or distinguished visitors, whereas what any larger sampling of Olmec portraiture is probably far more likely to show a MUCH more diverse collection of facial characteristics.

Obviously if the Olmecs had Egyptian visitors they weren't "copycats" and didn't start writing in Egyptian hieroglyphics but they could have been inspired to make advances in writing because of such contact.

To me, there must be immense pride just for the adaptations of ideas that were made - surely even if the idea of Pyramids came from Egypt, native Americans soon far surpassed their "teachers" building more magnificent pyramids and far more of them than the Egyptians ever dreamed of. To believe that one's culture invented pyramid building, however, if it is not so can only be false pride.

There are also many cultural components that likely are correctly credited to native Americans. The Xipe Totec ("Flayed Goddess or God") character that is still seen in what are probably some of the last of the Codices is seen unmistakably on the side of one of the La Venta monuments. I'm skeptical that came from the East and it's at least as old as the Olmecs - a tradition that may have exceeded 3000 years.

Also you bring up architectural parallels between Asia and America. I'm happy to see that. Personally I'm skeptical that the similarities between, say, some of the El Tajin architecture and Candi Sukuh temple is sheer coincidence and I even suspect that pre-Columbian contact between Asia and America may have resulted in considerable influence on Asian architecture, another point of pride that is usually denied native Americans by rigid "isolation" views that insist culture happens in bubbles and people never travel around.

One academician (who shall remain nameless because I've forgotten his name but I believe he is of native descent himself) posed the question, "If a few Asian vistors came here before Columbus, why didn't they convert everyone to Buddhism?"

I don't know how many things must be wrong with that question exactly (starting with "What if millions of natives DIDN'T WANT to be converted to Buddhism by six Chinese?" lol) but I think it only goes to show just how little many scholars may be accustomed to giving thought to some of the most glaringly obvious questions, sadly.

Good thing not all of us are afraid to ask such questions. Well done, sir!