Author of the Month :  The Official GrahamHancock.com forums
Join us at this forum every month for a discussion with famous popular authors from around the world.
Welcome! Log In• Register
Go to: Forum Home•Board•New Topic•Search
Re: Welcome to Alexandros Angelis our author of the month for August 2021
Author: Thanos5150 ()
Date: September 02, 2021 12:02AM
Hello.

"Implies" is different than "shows". And in reality more likely implies it was Neanderthal which beyond the early websites you quote from the initial click bait press release the focus clearly shifts towards this conclusion.

> If the tools discovered in Crete
> are attributed to those species, then it makes
> sense that those species traveled - by sea - to
> Crete.

They are associated, not "attributed", and are also associated as I said with Neanderthal and Idaltu as well. For reference, these would be a sample of the tools that were found: By the same token the Mousterian stone tool industry associated with Neanderthal was also used by Homo sapiens sapiens as well so there needs to be a greater context for attributing these tools to one species over another.

> I respect that you do not see it in the
> same way, but I do not think my interpretation is
> by any means irrational.

I did not say it was "irrational", just not correct to state such a thing as "fact" the least of which for the reason this idea was never really supported in the first place with the shift quickly leaning towards Neanderthal.

> You are right, sea level was lower than today.
> However, if you visit
> Floodmap and lower sea level by ~130 meters you will see that
> this difference practically does not change the distance between Crete and Peloponnese
> (Peloponnese being the closest mainland to Crete).

Thank you for the link. When you set it to - 130 meters what it does change is the distance between the islands including congregating many of them as single land masses. So the distance we are concerned with is not from Peloponnese to Crete but rather Peloponnese to Kithira to Skarian to Crete. Primitive sea travel would have been done by line of sight i.e. they had to see where it was they were going to which getting to Crete would have not been some hope for the best sea voyage, or on the flip side some form of advanced navigation, but rather by island hopping.

And the route may just as well have been from south western Anatolia or from the Cyclades where there are several Neanderthal sites that were found like for example on Naxos dated to C. 200,000BP (as I see you note in your article as well). Looking at this map dating to as late as 250,000yrs BP we can see that things were even more different: 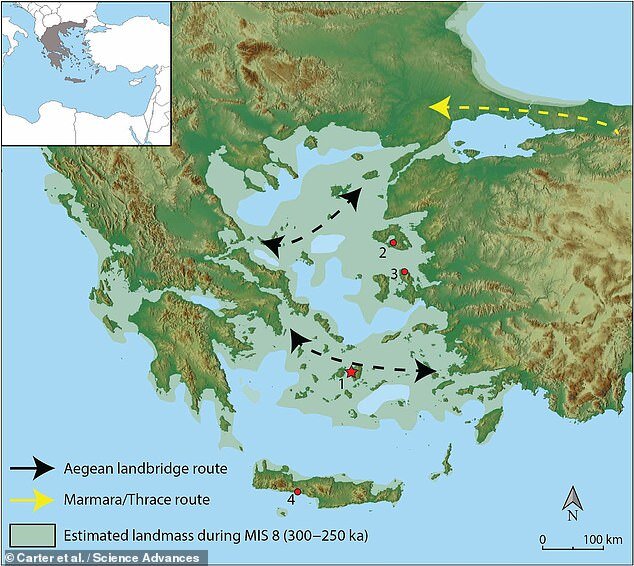 > The truth is that I do not get your point. I am
> not claiming that those people had extraordinary
> technology, like metals. So, I do not see why
> seafaring and primitive tools are conflicting.

What you are suggesting though is given that more primitive Homo species, the older the better, were "seafaring" so long ago then why is it unreasonable to think "advanced" Atlanteans were sailing around in ships 12,000yrs ago-some 100,000+ years after their "ancestors". Regardless of this Atlantis business being true or not, this is a false equivalency on many levels with one having zero bearing on the other.

I understand it makes little difference to your beliefs, but there is nothing wrong with getting your facts straight and presenting information in an objective manner in the first place.

> After all, even Homo Sapiens did
> not have advanced tools until a few thousand years
> ago.