Author of the Month :  The Official GrahamHancock.com forums
Join us at this forum every month for a discussion with famous popular authors from around the world.
Welcome! Log In• Register
Go to: Forum Home•Board•New Topic•Search
Re: Summary - Giza: Portrait of a Pole Shift
Author: Spiros ()
Date: July 30, 2021 03:46PM
Hello Scott,

1) The angular incline of the QC's southern shaft is given as 39.65° (Gantenbrink, 1993). For reasons I hope will become clear later, the inclination of this shaft was intended, imo, to have been set at 39.75°. This difference 0.10 of 1 degree in observing the altitude of Al Nitak is essentially invisible to the naked eye. (Or it may be that Al Nitak was observed accurately but that the inclination of this shaft is off by 0.10 of 1 degree--an imperceptibly small builders' error).


When I was born the altitude of the Sun was 39.601° according to Stellarium.


The oldest Neolithic site in Greece is Phaistos(Crete). Aceramic Neolithic started at 7000 BC but the site seems to have been inhabited earlier. Centered at Knossos the year 2580 BC - Khufu Pyramid erection the altitude of Alnilam at transit was:


If we are stationed at the Amphion pyramid at Thebes at 2650 BC then the pole star Thuban at upper culmination had an altitude of:

This step pyramid dates to ~ 2650 BC. Just want to point out that there are different explanations to the measured structures.


Then we come to the Orion precession theory that involves the Queen pyramids. I will post the setting azimuths of the outer Onion belt stars (Alnitak and Mintaka)at the year of their lowest altitudes and also the Giza plan at transit year. Next to the geometric setting azimuth I post the actual setting azimuth(with the atmosphere, flat horizon):

Using Dash diagrams and Google Earth coordinate data I have updated certain Queen pyramid positions. G1a-b-c seem OK also G3a. G3b and G3c might need to be refined a bit. None the less the value I now have for the azimuth between the apex of Khafre’s pyramid and the pyramids G3a and G3b is as follows.

The proximity of these directions seems to point to the architects knowing procession. It seems that they encoded dates from I dynasty, to III dynasty, to IV dynasty, to VI dynasty, and to the New Kingdom. See here: 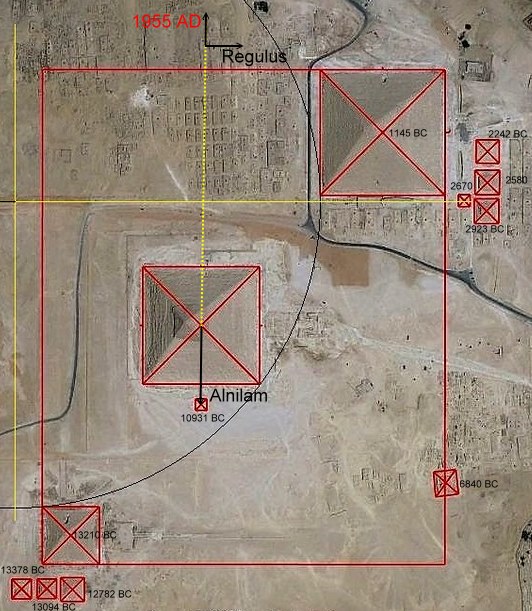 The above diagram does not take into account revised pyramid positions so I will be updating it soon. The dating of the Khufu Pyramid is now at 2593 BC.

Now let’s come to your new pole shift idea. If the pole shift did take place then the information would have surely been encoded. We start off by the present latitude of this place. You propose a value of 26.5 degrees which as I have pointed out can easily be derived geometrical with the half of a 1:2 orthogonal triangle. But if your theory is correct we would expect to find the other values encoded. You propose the 6 degrees West of North = azimuth = 354 degrees as we target it from Giza. As I have pointed out we don’t find this 6 degrees angle encoded consistently in an accurate manner. If it was important then this would have been the case.

Another option is to have structures erected at Giza that form the 354 degree azimuth direction. Once again we don’t find this encoded. Another thing that they surely should have done is encode the longitude difference between Giza and this Old North Pole. I used your data of 26.5° and 354° azimuth to pinpoint the former Old Pole. The longitude difference between it and Giza is 166.495 degrees. If you add this angle to the azimuth of the G2 causeway one gets:

This is close to the West direction 270° but is it simply a coincidence. By the way the G2 causeway direction is the direction the Sun rose the day was born. See how coincidences pop up from no-where? What they could have done to encode this shift is to encode information of the Orion belt starts at 2550 BC or at the time of the 11288 or 10635 BC alignments. Let’s see what we have. I inserted the coordinates of this supposed old North pole position we this is what I saw.

The altitude of the central Orion belt star Alnilam at 2550 BC was 11.58° so this compares to the 168.42 degrees equivalent of the G1-G2-G3 angle of 168.54°. But why would this be what they encoded and not the encoding of the altitudes of the tallest mountains of Egypt and Hellas as I point out in my book Amphion’s Secret?

We can find a number of coincidence for this angle. One that relates with Saturn:

In the past I have presented another important correlation. The direction from Giza to the tallest mountain of Africa, Killimazaro. The list goes on and on.

I have the Khentkaus I stepped tomb azimuth (from G2) at 122.411°. Since this tomb is not aligned to true North but “tilted” you could make a case that it corresponds to pole shift or something like that. If we flip the Old North pole then from the Southern hemisphere the altitude of Alnilam at transit 2550 BC is 41.52 degrees. This has not been encoded in the shafts or anywhere else. Also the rising or setting azimuth of the belt stars do not seem to work out to Giza encoded azimuths.

So maybe we should look at the 11288 – 10635 BC epoch. Alnilam at upper culmination at 11288 BC the year of the Giza to Orion orientation alignment was 76.16 degrees. We don’t know the exact direction of the Khufu causeway but from:

There does seem to be an alignment here. Here the Orion belt start are circumpolar so they don’t set.
But the pole reversal theory does not stand up(no pun intended) scientifically. We just simply need to remind ourselves that Earth is a two body system with the Moon. The tidal forces of the Moon would not let this reversal take place.

If all goes well and there is no pole shift due to earthquakes in Alaska I will be ordering your book soon when my name aligns with the name of the month.