Author of the Month :  The Official GrahamHancock.com forums
Join us at this forum every month for a discussion with famous popular authors from around the world.
Welcome! Log In• Register
Go to: Forum Home•Board•New Topic•Search
Re: Summary - Giza: Portrait of a Pole Shift
Author: Scott Creighton ()
Date: July 29, 2021 11:49AM
Hi Audrey,

Thanks for dropping by again. Always interested to read your posts.

SC: Perhaps you should have said more at the time rather than merely hint at it?


>
> I don't think it's a glitch in Stellarium. I had
> Starry Night PRO at the time (in 2009) and I found
> the same thing, an upside down Orion when seen
> from the south pole. IIRC Orion, as seen from the
> south pole, barely rises above the horizon, just
> enough to see the belt, and it's upside down.
> Guess this could be proven if you taped Orion on
> your ceiling and stood on your head to look at it.
> Or, ask Stellarium or Starry Night. Is there an
> email for Stellarium support?
> 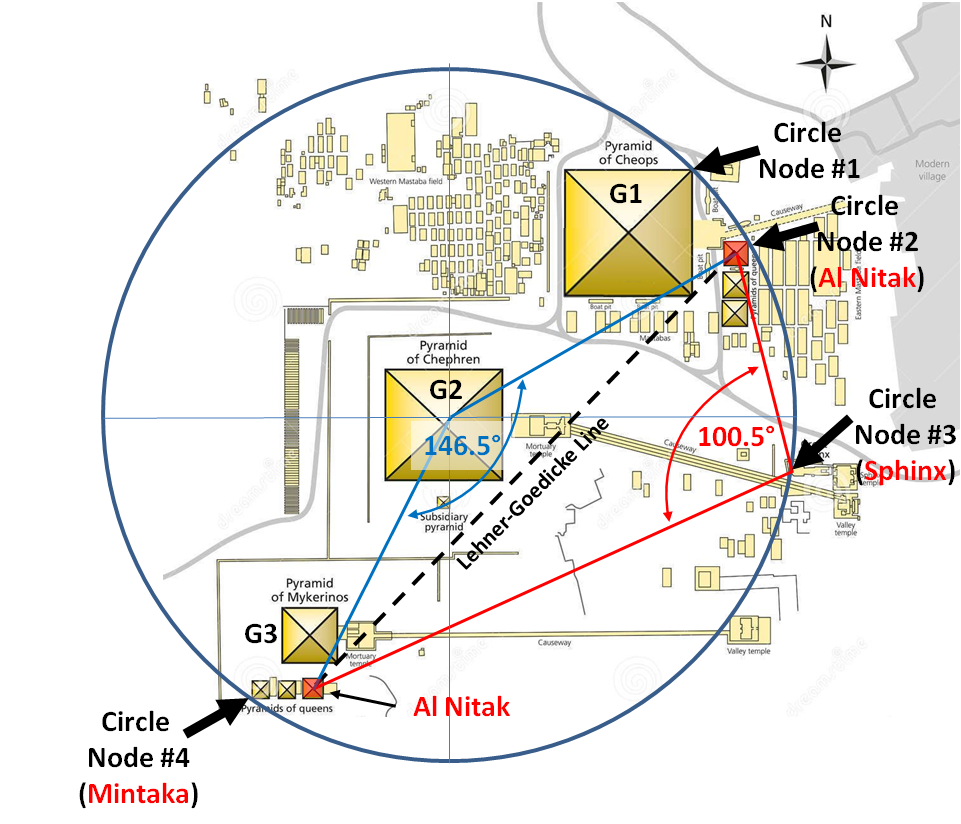 SC: Yes, it's a very intriguing circle. I explain more fully in (Part #3) how I think it should be used/understood. It simply represents the horizon, where sky touches ground (as such it allows us to see the 180° inversion of Orion's Belt). IMO.

>And now I ask you, when
> viewed from above why would you think the
> satellite pyramids are Orion's belt?

SC: Because they are demonstrating a different aspect of the Belt, namely the shift across the sky of 146.5°. (They are actually multi-layered but I won't go into that here).

>What would
> the 3 great pyramids be?

SC: The main pyramids help us to date the monuments (as per Bauval and Trimble). They were also the main Recovery Vaults (with the GP the beating heart of the whole recovery of the kingdom which is why this particular monument--and only this monument--was designed to hold the bodies of Khufu's ancestors as per the Surid legend).

>If the 3 satellites are
> the belt, the great pyramids must be something
> else.

>It doesn't make sense that the belt stars
> would be duplicated in the tiny pyramids because
> the great pyramids would have sufficed.

SC: Not if you want to show different aspects of the event - i.e. what happened and when it happened. You're not going to build 9 giant pyramids when smaller ones would be just as effective (with a 'backup' of the message built into the GP's shafts).

>Where you
> pick out one small detail, I think the pic of the
> whole circle will tell a different story.
>

SC: One small detail? That the satellite pyramids can be shown to present information of a pole shift event I don't consider to be a "small detail". With respect.

> My brother asked me back then, if you drew a line
> straight up from G1 or G2 where would it point to?
> Look at the longitude and latitude, and if you
> find the same thing I did be sure to mention me in
> your next book.

SC: I won't know to credit you because I don't know what you think it points to. (And what does G3 point to?) Perhaps you should simply state it all here yourself?

>
> Otherwise Scott, and don't take this personally, I
> think you're missing the whole picture. You seem
> to be bogged down in a little detail of which
> there was no guarantee the tiny pyramids would
> survive thousands of years.

SC: And yet they have.

>I think we both
> believe there was a purpose to the layout and I
> find it hard to believe the builders would have
> banked it all on 3 tiny pyramids that probably
> wouldn't survive very long.

SC: And yet they built them well enough to ensure they did last long enough.

>They were smarter than
> that. If you wanted to leave a record to history
> would you consign it to 3 tiny pyramids, or 3
> giant pyramids?

SC: They're actually quite large when you stand beside them. They're only "tiny" relative to their giant neighbours.

SC: You would entirely avoid your own spoken/written word since language is easily lost over time and would merely serve to distract. You would make your record in the only universal language (as I say in Part #2) - the language of mathematics (and astronomy). Yes, we can all have our opinions of what it all means. And that's perfectly fine.

> I don't for a second believe they would have used
> twisting air shafts to point to a star.

SC: Why not? These "twisting air shafts" are precisely what we would expect to see during a pole shift event. The 2 southern shafts of the GP pretty much go straight. The reason? Because the builders of the GP knew the former position of the Belt (Al Nitak) i.e. its altitude on the southern meridian. It had been at ~39.75° altitude just before the pole shift and had been at the altitude for a very long time, unchanged. However, as the Earth began to invert then Orion's Belt would end up turning over 180° (i.e. the Earth would turn over) placing Orion's Belt upside-down in the northern sky (of the southern hemisphere).

But as the pyramid was being built, the Earth would still have been settling down into its new rotational axis. There would still have been a residual wobble of the inversion event which would gradually dissipate over time but this wobble would have been observable to the builders, probably for many years. They weren't targeting Al Nitak per se but rather were tracking Al Nitak as it swayed to and fro on the northern meridian. If the Belt was observed to have swung (pivoted), say, 45° in one direction, then the KC northern shaft would change direction to track its new stellar location. As construction progressed over the years and Al Nitak was seen to have rebounded back (by a smaller amount as the wobble dissipated), then the direction of the shaft would turn back again (by the smaller amount) until the Belt had finally settled. That ongoing 'wobble' of the Earth's axis (after the inversion) is what the bends in the northern shafts are showing us, imo.

>Dr Trimble
> saw the date 2550 bc because she subscribed to
> traditional Egyptology, and Bauval's date of
> 10,500 bc is coincidently the same date given by
> Edgar Cayce.

SC: No Audrey. It is a demonstrable fact that the angle of a line thru G1-G2 matches a line thru Al Nitak-Al Nilam ca.11,000 BCE (not 10,500 as per Bauval). Bauval only arrived at his 10,500 date as a result of using a very early star-mapping programme which did not take account of a number of astronomical effects. He did not rely on Cayce, Audrey. He relied on Skyglobe 3.5.

And Virginia Trimble arrived at her date the old fashioned way by doing manual calculations of the angle of the KCS shaft.

>Toss both aside Scott and look at the
> coordinates, don't try to make it fit with what
> anyone else says.

SC: But that is where the great astronomical dichotomy lies, Audrey. This great difference of almost 8,000 years between the dating method used by Trimble to that of Bauval realistically should not exist. And yet it is there. That 8,000 year difference is, imo, astronomical proof of a pole shift event having occurred in our remote past. And I don't think that is at all "what anyone else says" or has said. You saw it first here.