Author of the Month :  The Official GrahamHancock.com forums
Join us at this forum every month for a discussion with famous popular authors from around the world.
Welcome! Log In• Register
Go to: Forum Home•Board•New Topic•Search
Re: Giza: Portrait of a Pole Shift (Part #1)
Author: Scott Creighton ()
Date: July 21, 2021 03:23PM

In anticipation of
> this impending disaster, so the Coptic-Egyptian
> tradition tells us, King Sūrīd (possibly
> Suphis/Khufu) ordered the construction of pyramids
> - giant, immovable manmade mountains - into which
> everything would be placed to ensure that the
> kingdom could be 'reborn' after the worst effects
> of the cataclysm had passed.

Audrey: I just hate generalizations.
How would the kingdom be reborn, if the inhabitants of the kingdom didn't survive?


I guess they hoped/anticipated some would survive. One thing is for sure though--given their religious beliefs, they would likely have thought that if they did absolutely nothing about the coming calamity then all probably would have been lost forever.

So this story is saying that the pyramids housed everything needed for the kingdom to survive, but not it's inhabitants. One great pyramid would house how many through an earth shattering cataclysm? They would need food, clothes, tools etc, and we're to believe all this was stored in the small chambers of the pyramids so that Noah could emerge to continue the kingdom.


Well that's what the Sūrīd legend states. The pyramids were intended to be hermetically sealed and water-tight. This would hardly be suitable for people. Ancestors already dead fine, living, breathing people not so much. They were essentially doing something not so different to what our own civilisation today is doing with the Svalbard Global Seed vault. The Svalbard Global Seed vault isn't about storing enough seed within it to feed the entire Earth after a calamity. It's about ensuring our main crops etc are not lost forever and the Earth can be re-seeded after any major Earth disaster where crop diversity is lost. Consider also the galleries to the north of G2. There's around a hundred of these each about 100 foot long, 12 foot deep, 10 feet wide. 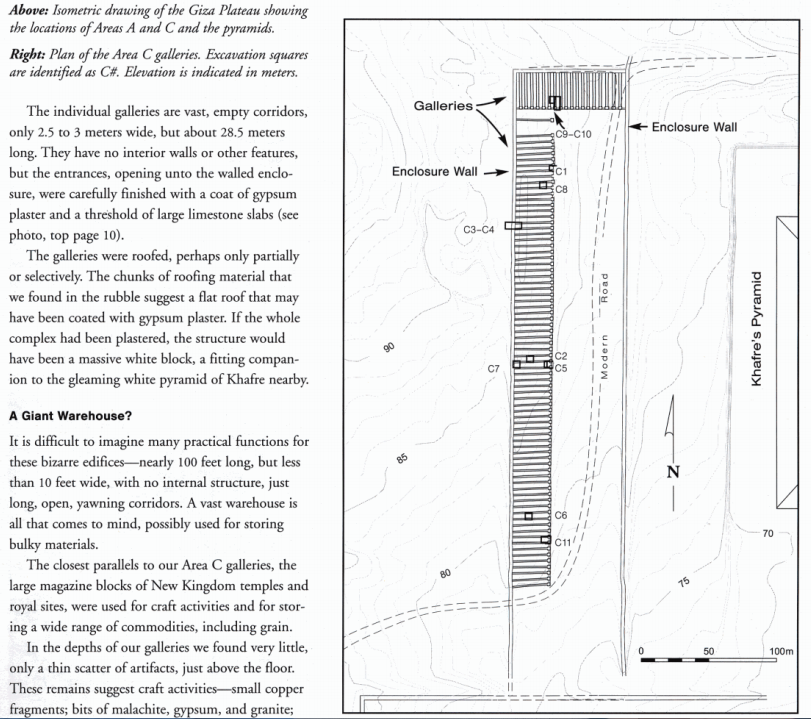 Now that's a lot of underground storage. How would it be found? Because there's a great big mound of stones (a 'marker' cairn if you like) right beside them.

Noah? Probably not since, imo, the Flood of the Sūrīd legend was a different event to the biblical Flood.

Audrey: Or maybe all that was needed for rebirth was the math encoded, and those who would need the math to rebuild would seek shelter in some dugout in an unknown location that was equally suitable to sustain a cataclysmic event. It doesn't make a lick of sense.


The "encoded math" appears to be, as the Sūrīd legend suggests, to pass on knowledge of the stars and their circles (of past and future events)--i.e. a stellar calendar telling of what happens to the Earth and when it happens. IMO.

Audrey: What would survive this cataclysm, man or knowledge? If both, where did mankind go to survive? If they built great pyramids to preserve knowledge of some sort, surely they built equivalent structures for themselves.


I imagine Sūrīd would likely have taken additional measures to ensure that some people (animals too) had a means of escaping the coming disaster by perhaps also building many large boats. Perhaps the many boat pits we find dotted around the pyramids are the remnants of that?

> This Sūrīd 'legend'
> is, imo, a largely forgotten past bequeathed to us
> by an ancient civilisation that isn't so much lost
> as it has been misplaced in time.

> And this is essentially where we are today with
> the Coptic-Egyptian Sūrīd Legend which relates
> to us an unusual astronomical event in remote
> antiquity whereby the Earth seems to have tumbled
> over and the stars in the heavens moved from their
> normal passage across the night sky:

Audrey: I cannot for the life of me, see the Copts as ancient.


In the sense that 'ancient' is partially defined as something that 'no longer exists' then, since the Copts do still exist, I can agree with that.

Audrey: As has been pointed out by others, theirs is not an ancient culture.


The Copts claim to be the direct descendants and custodians of the Ancient Egyptian civilisation. Their AE heritage is ancient even if their present religion is not so ancient.

Audrey: Neither is Christianity. I have to interject the American Indian into this scenario as they also have stories of a great flood. Their legends are disappearing as they've adopted Christian beliefs. Ancient tales and Christianity are not compatible and something has to give.


Yes, ancient 'tales' can become embellished or moulded to fit in with the new religious 'regime'. Happens all over the world. However, more and more scientists are now taking seriously the science of geomythology which essentially studies ancient myths with a view to interpreting material therein that is often couched in deeply symbolic and often highly embroidered language into natural events of a geological, astronomical and even palaeontological nature that occurred in great antiquity. Furthermore, Professor Guirguis (a Copt) explains that the Coptic people adopted the oral tradition as a covert means to preserve their ancient cultural heritage and traditions during times of persecution. These oral traditions were eventually interpreted and committed to the written form by Arabic scholars of the early Medieval period.

And if the earth tumbled over, twice no less, what are the odds that ONE air shaft still points to ONE star that indicates this all happened.

> Of course, it would not actually have been the
> stars themselves that were changing course
> but rather the Earth beneath them that was
> reorienting itself (relative to the 'fixed' stars
> ) and which became "overthrown". To a ground
> based observer it would appear that it was
> the stars that were deviating from their normal
> course across the heavens. Accepting this passage
> on face value, then this Sūrīd 'legend' seems to
> speak to us of a pole shift event that occurred at
> some time in remote antiquity.

Audrey: You've confused the issue with pole shifts. You reference Peter Warlow's vid which speaks to magnetic pole shifts which is not the same as the pole (axis) that the earth rotates around. Science tells us that a magnetic shift wouldn't produce a shift in axis so I can't see your purpose in bringing up Warlow's vid.


Sorry Audrey, but this is simply incorrect. The Warlow video clearly proposes geographical shifts (Earth inversions) and
not geomagnetic reversals. Yes, magnetic reversals are discussed in the video but only insofar as Warlow believed that we have things back to front. Part of Warlow's theory is that the Earth's magnetosphere (its magnetic field) is fixed and it is the Earth that flips--not the other way around as mainstream science presently has it. A bit like the Medieval heliocentric question with regards to the Earth--we had it the wrong way around for a long, long time (due much to religious dogma). Warlow thinks similar with regards to magnetic reversals. See the video from about 7min 30secs.

Audrey: And if the axis did shift, it wouldn't produce a change in rotation, as Drew tried to point out. To change rotation, the earth would have to stop spinning and start spinning in the opposite direction. Which is a whole nuther subject.


In Warlow's Tippe-Top Theory, the effect is precisely that--a reversal (not of the Earth's rotation) but of the locations of the sunrise and the sunset (they swap places). Again, see the video from about 9mins 30secs.

> What must be observed and stressed here is that,
> from a purely theoretical perspective, the
> two different stellar observations made by Trimble
> and Bauval should (realistically) have arrived at
> the very same date since the builders,
> almost certainly, would have recorded Trimble's
> star altitude alignment and Bauval's Belt pivot
> alignment from the very same, single
> observation of the Orion Belt stars (figure
> 1.4).

Audrey: What exactly is a "Belt pivot"? As far as I know Orion doesn't do summersaults so wouldn't have a pivot point.


In both images below, the lowest of the Belt stars (Al Nitak) is fixed due south (on the southern meridian) at an altitude of 45°. 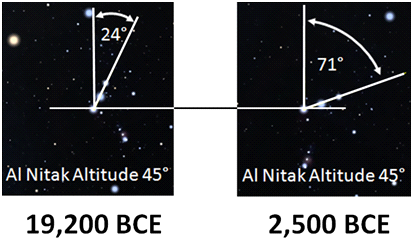 Notice how the Belt is angled at two different angles at these two different times. That is what I refer to as the 'Belt Pivot'. The Belt pivots over time, upwards and downwards.

> The Giza monuments would, just as the Sūrīd
> Legend tells us, have been built shortly after the
> first pole shift event, locking into them the
> Earth's 'new' (at that time) geophysical
> properties. Thousands of years later, however, it
> seems that a second pole shift event (slightly
> different in nature from the first) occurred and
> effectively replaced the Earth's former
> geophysical properties that had been encoded by
> the builders into the pyramids but not, of course,
> into our modern star mapping software which uses
> the geophysical/orbital properties of the Earth
> after the most recent pole shift event,
> leaving us now with a 'time-slip' dichotomy of
> 8,000 years as a consequence of these two separate
> (and different) pole shift events.

Audrey: So let me get this straight. Bauval says that one air shaft that doesn't make a straight run but has a couple of bends, points to a star as it appeared over 8,000 years in the past.


No. Bauval equate the Belt pivot angle with the angle of the main Giza pyramids to establish the ca.10,500 date. It's Dr Trimble that uses the star-shaft to date Al Nilam which was at ~45° altitude ca.2550 BCE. Which is the whole point of this thread because, realistically, there should be no difference between the dates given by the two different dating methods. That, to me, may be indicative of a geographic pole shift event.

Audrey: So which part of the shaft does the pointing, the first part or the bend or the third part as it exits the pyramid? And for some reason they found it necessary to point to a star 8,000+ years in the past. Why???? This doesn't make a lick of sense.


What I'm suggesting is that when the pyramids were first built, the angle of the pyramids (see image below) would have matched the Belt pivot angle (as per Bauval's OCT). At this time the QC star shaft (not KC shaft as Trimble believes) would also have targeted the altitude of Al Nitak (not Al Nilam as Trimble believes). Both these alignments would have been observed at the same time and built into the monument at the same time. There would not have been a single minute between each of the two alignments (Belt pivot angle and Al Nitak altitude angle). That we find today that these two alignments are now separate by some 8,000 years or so is the big question here because, as I said, realistically there should not be a single minute between them. That there is this great time gap is, as I have stated, suggestive of a geographic pole shift event. 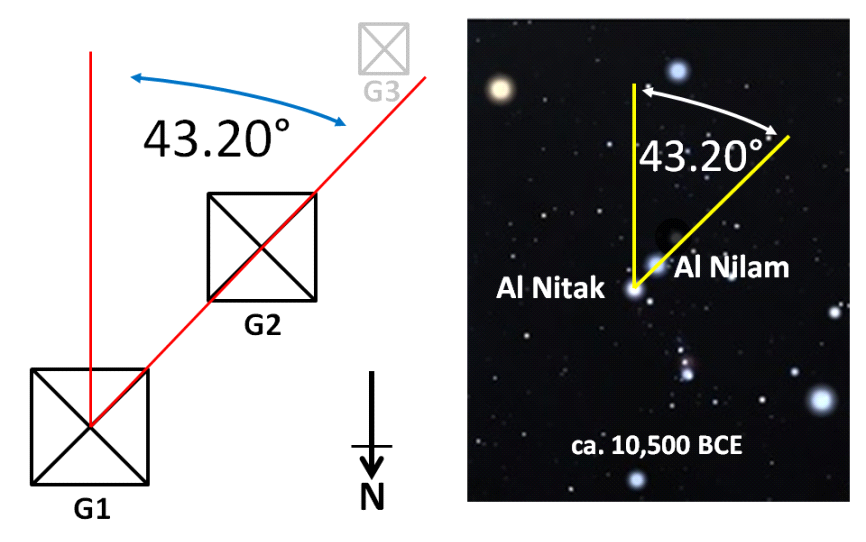 Audrey: If the pyramid builders saw this pole shift coming, why would they leave such a convoluted method of encoding it? Four shafts and only one points to this cataclysmic event. Most inefficient.


To be honest, I do not see it as convoluted at all. Maybe my final thread on this topic will help you better visualise what I'm getting at?

Audrey: Personally I think you guys are hung up on air shafts that IMHO, had a purely mechanical function and not a 'pointer' function.


Who knows? Perhaps they pointed to the former and new locations of Al Nitak to ensure the souls of Sūrīd's ancestors up there in the Big Void (imo) could find their way to their stellar destination? Just athought.