Author of the Month :  The Official GrahamHancock.com forums
Join us at this forum every month for a discussion with famous popular authors from around the world.
Welcome! Log In• Register
Go to: Forum Home•Board•New Topic•Search
A Toast to the Seven (Hidden Meanings Part 4)
Author: MDaines ()
Date: February 18, 2020 03:40PM
Part 4. A Toast to the Seven

Part 3. The Cabal and its Mysterious Source:
[grahamhancock.com]

SAL at the start of lines 224-226 is not the only threefold repetition in the winter solstice section of THE STORY OF SUKURRU. NI also appears three times. Its main meanings in Sumerian dictionaries are ‘oil’ and ‘thick’. I have added ‘night’ through observation in context, particularly linked to the presence of the moon. In this demonstration, I make use of the unorthodox meanings of both NI and SAL. May I be forgiven! Or not. 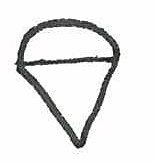 
There are at least three possible interpretations of the placing of NI. As it begins one line earlier than SAL, it can be read as ‘night’ and correspond to the start of the pagan festival as the sun was sinking, to be continued through until the dawn of day three, the vulva symbol SAL on line 226 indicating the moment of the rebirth of the sun.

Symbol NI is related to abundance and fertility. See its sibling on the Warka Vase – a container overflowing with food, no doubt an offering. As such, NI might be understood here as an offering of precious oils brought by three individuals on the occasion of a birth ca. December 21st.

But in the context of a pagan shamanic ceremony, it might equally correspond to the imbibing of some form of substance, a thick liquid, over the three nights. The translation of the frenzied scene in THE STORY OF SUKURRU, with its noisy harpies and the pouring of oil might be seen to favour this version. The exasperated celestial figure in the climatic third line (226) puts an end to it all:

“On the female voices round curses heard; That their harping mouths by their whirling reeds be dammed!”

It appears that the pagan festivals of….the 4th millennium (?) were not solemn occasions.

There is another interesting observation to be made. NI, NI, NI, sixth symbol over three lines, might be seen as code for 666. Taking my observations on Gnosis into account, this would tend to confirm a reference to an esoteric, shamanic ritual, to the darkness of night and potentially to the troublesome encounter with one’s demons. See GNOSIS, 666:
[grahamhancock.com]
,
The Toast to the Seven

The first NI in this acrostic is preceded by MI (also see GNOSIS, 666) and the two together were translated in THE STORY OF SUKURRU to ‘dark night’ (bonjour Christopher Nolan). There exists an intriguing similarity between MI-NI and Old Norse ‘minni’, the giving of a toast in memory of the deceased. It would have been a fitting gesture to accompany the phrase found in line 223:

“…and dark night its cloud gathering over the lord.”

(It would also have been the perfect opportunity for the bards to raise their drinking vessels with the audience at this point in the script – remembering that THE STORY OF SUKURRU was also a musical performance.)

On the understanding that this section of the text is a riddle, that the workings of this riddle are understood through the two symbols KA-BAL discussed in part 3, the ‘rotated word’, I looked more closely at MI-NI, ‘dark night’ and the probable source of the Old Norse toast, and reversed the symbols to find their phonetic mirror twin.

This results in INIM which is another phonetic value of symbol KA, the word, and appears to confirm the notion of a toast:

Another slight twist and ‘dark night’ might just possibly read IMIN, given in Sumerian dictionaries as the number ‘seven’. The link is more tenuous, particularly as IMIN isn’t found as IM-IN in the lexical lists, but for what it might just be worth:

What might this mean in the context of a toast, in the context of a pagan ceremony of the 4th or 3rd millennia BC or earlier? I will have to leave that question on the table. The next and probably final piece of the puzzle doesn’t answer it. See the 11th proverb on my website for an example of NI.