Author of the Month :  The Official GrahamHancock.com forums
Join us at this forum every month for a discussion with famous popular authors from around the world.
Welcome! Log In• Register
Go to: Forum Home•Board•New Topic•Search
The Cabal (Hidden Meanings Part 3)
Author: MDaines ()
Date: February 16, 2020 12:32PM
Hidden Meanings: Part 3 THE CABAL

Part 1 demonstrated the presence of an acrostic, a hidden coded message, in the section of THE STORY OF SUKURRU dedicated to the solstice period. The acrostic is visible thanks to the three vertical symbols beginning lines 224 to 226: [grahamhancock.com]

In part 2, I looked more closely at the second symbols of the same three lines and discovered the speaking ass (see her symbol in the original post). This time, I’ve added the following line 227 as a continuation of the riddle: [grahamhancock.com]

KA, the ‘word’, is the second symbol on line 226 and refers there to the speech, the words of the ass. It’s unlikely to be a coincidence that BAL, also given as BALA, meaning ‘to rotate’, is the second symbol on the next line. Continuing in the vertical reading (or however the layout was originally organized on the clay tablets)we find the KA-BAL, also expressed as KA-BALA: 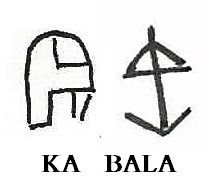 BAL or BALA has the given meaning ‘to turn’, ‘to rotate’. KA-BALA translates to the ‘turning or rotated word’, i.e. a riddle, a play on words.

Balaam, mentioned in part 2, is given as a prophet, a diviner, someone versed in occult proceedings, someone with knowledge of astronomy/astrology, in order to make predictions, to give advice. The Bible has him as someone who can potentially place curses on behalf of God. Given their obvious link to the speaking ass, it isn’t a stretch to suggest that both Balaam and Balak of that particularly strange speaking ass tale, got the first syllable of their names here – the source of the diviner is hidden in THE STORY OF SUKURRU.

On a much broader scale in the process of demonstrating that Sumerian is the source language, the Cabal of both Arabic and Hebrew tradition has its origin here too:

I’ve posted a short Sumerian proverb on my website where BAL, the celestial and rotating spindle of necessity described by Plato, appears in context.

Part 4. A Toast to the Seven:
[grahamhancock.com]

(Edited to point to the other related posts.)