Author of the Month :  The Official GrahamHancock.com forums
Join us at this forum every month for a discussion with famous popular authors from around the world.
Welcome! Log In• Register
Go to: Forum Home•Board•New Topic•Search
Who were the Anunnaki?
Author: MDaines ()
Date: February 11, 2020 08:56AM
Given the importance of this name in Sumerian lore, I decided to go to the source of it and see for myself. Not having anywhere to look for Zechariah Sitchin’s reasoning as he gave no explicit references, I turned to line 8 of ENKI AND THE WORLD ORDER (ref. 1.1.3) on ETCSL (website of the University of Oxford):

The original symbols used to arrive at academia’s ‘Anuna’ and Sitchin’s ‘Anunnaki’ are given there as:

A cross-reference shows line 248 of ENKI AND NINHURSAGA (ref.1.1.1) beginning with the same group of symbols. There they are taken to be singular and feminine. It’s written somewhat intriguingly:

“The Anuna (slipped off her garment)…”

From my monosyllabic perspective where each symbol represents a complete word with inherent meaning, NUN is obviously the central element in this group, the original name if there is a name to be found – and the most useful symbol in a study of the semantics of the Anuna/Anunnaki. It’s also a symbol that has remained frustratingly difficult to pierce despite appearing more than once in THE STORY OF SUKURRU.

NUN is given as ‘princely’ and ‘foremost’ at the earliest period in Sumerian dictionaries. It looks like a primitive Egyptian djed, an elongated pyramidal form with horizontal strokes, two or more, across the top. Not very helpful. Most important, it’s also given as the name of the first city in the Sumerian King List, transliterated on ETCSL (link above), reference 2.1.1, lines 2 and 3, as ‘eridug-ki'. This is what it must once have looked like: 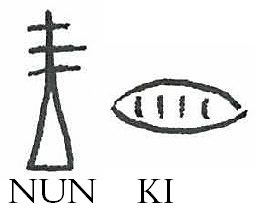 NUN-KI appears on one of the proverbs/riddles (tablets from ca.1900-1600 BC with my hitherto unknown translations) on my website where I decided to leave it as: ‘City of the Nun’.

On page 73 of STAR NAMES AND THEIR MEANINGS by R.H. Allen, Nunki is given as the name of a bright star in the constellation of Sagittarius. Allen cites the work of German Assyriologist Peter Jensen as follows:
“And he claims it as one of the temple stars associated with Ea or Ia of Eridhu, the Lord of the Waves, otherwise known as Oannes, the mysterious human fish and greatest god of the kingdom.” (eridhu and eridug are both phonetic values of symbol NUN.)

It’s probable that Jensen arrived at his celestial link mainly through his study of the Babylonian astronomical MUL APIN text. On page 286 of BEFORE BABEL THE CRYSTAL TONGUE, through a study of the symbols and their collocations, I also find reasons to link the NUN of Nunki with the Oannes of Greek Berosssus.
The earliest reference to Oannes, the fish god who can be found in numerous images, was said to have been written down by Berossus during the 4th century BC, although we have no first-hand testimony of that. At the same time and as far as I can tell, none of the ancient writings and translations in any language (Greek, Arabic, Latin…) from any time before, during or after the 1st millennium AD mention a group of beings called anything like Anuna or Anunnaki. I daresay I will be challenged if that is not the case. We shall see. As I’m only interested in the truth, that would be fine. To my knowledge, none of the ancient texts written in or translated to those languages that refer to the region, history and culture of Mesopotamia mention the name. The Anuna appear for the first time in modern-day interpretations of the Mesopotamian tablets.

For me, the elusive Nun, the ‘foremost’, whose name figures as that of the first known city in the Sumerian King List, was the precursor of all monks, a herald, a teacher, a father figure. My analysis has Latin nuntius, the messenger, as a direct descendant of Sumerian NUN and Greek nonnus and Late Latin nonnus, the monk, tutor and elder, also stemming from there. Confirmation comes when we find that Arabic Dhul-Nun was an epithet given to a renowned Egyptian ascetic monk (also apparently an alchemist) and that it has the meaning ‘the One of the Whale’. Nun is the fourteenth letter of Arabic and given as ‘great fish’ or ‘whale’. He equates very well to Oannes, fish god and bringer of wisdom, but where did he come from? Out of his own personal whale like Jonah? NUN-KI as Whale City? Under water?

Then there is the clue found in the King List tablet fragment W-B 62 which gives a different name to the first city: NUN-KI becomes HA-A-KI which translates easily to ‘the City of the Fish’. This is what it might once have looked like:

Unless there is a mistake in the transliteration*, that seems to me to be an important piece of the old puzzle – matching Sumerian NUN to Arabic nun, through HA, the great fish or whale - but, to my knowledge, it hasn’t raised eyebrows before now. Looking forward to being corrected on that score too.

It’s interesting to note that accompanying symbol NA of NUN-NA, also discussed in BEFORE BABEL THE CRYSTAL TONGUE, is the source of all words ‘naval’ and more besides.

* Jacobsen, The Sumerian King List, 1939, p.58, note 107, p.70, note 5. That said, I daresay Jensen or another Assyriologist has long since made the interesting connection between the HA of the Sumerian King List on W-B 62 and the famous astronomical Mul Apin text. (where MUL-HA/KU₆ and MUL-NUN are mentioned in the same section.)