Author of the Month :  The Official GrahamHancock.com forums
Join us at this forum every month for a discussion with famous popular authors from around the world.
Welcome! Log In• Register
Go to: Forum Home•Board•New Topic•Search
Revising... The Test?
Author: PB Bytes ()
Date: August 22, 2019 04:48PM
Rebecca Bradley Wrote:

> I keep going on about it, at the risk of becoming
> really boring, because this misidentification has
> a knock-on falsifying effect on Martin’s whole
> shaky tower of logic.

I feel quite differently, actually. Your emphasis cuts to the heart of the matter, and if one can refute a pillar's legitimacy, it should fall. This relates to what I was saying about why I like presuppositions. Let's see what, if anything, remains standing... as one must anyway, in the long run.

> Now, on to business. Thank you for that considered
> reply, PB. I’m enjoying conversing with you. But
> I have a confession: I chose that ibex silhouette
> in particular because it could, to an
> inexperienced and subjective viewer, suggest a
> superficial likeness to the little beast on Pillar
> 43. Now we can look at why it’s impossible.\

I don't mind following along at all, Rebecca. Thank you for indulging me/us.So this is one of your "pillars", Rebecca, that the ibex interpretation is impossible. Very clearly then, a more extreme position cannot be taken.
>
> First, here is how Martin initially described the
> image: “The middle ‘handbag’ is accompanied
> by a standing or charging quadruped of some type,
> perhaps a gazelle, goat or ibex, with large horns
> or ears bent backwards over its body.
> Alternatively, if it is pictured facing the other
> direction, it might depict a crouching rat, with a
> long tail over its back.” But thereafter, he
> refers to it consistently as “charging ibex”
> or (charging) “ibex/gazelle.”


And just so we know our respective starting points, based on your description here Martin's pillar is that the image is "perhaps" an ibex, which grants him much more interpretive latitude.


>
> Well, there are two different ways to try making
> this image into an ibex; we’ll call them the
> charging ibex and the standing ibex. For the
> first, A is the horn, B is the forelegs, C is the
> hind legs, and D is the big square butt that
> I’ve been teasing Martin about for a few days.
> Its forelegs are off the ground, in a stance that
> could be called charging, but the poor beast has
> no head.

It was really tough sledding for caribou back in those hunter gatherer days, especially those with square butts (which surely hindered their ability to escape, resulting in a greater likelihood of eventual decapitation). ;)

Frankly, I don't see this ibex interpretation as tenable.

>
> With the standing ibex, A is still the horn, B is
> the face/muzzle tucked down against the neck, C is
> the forelegs, and D is the hind legs.

Yes, and as I made clear, I thought that this interpretation was reasonable, especially if tempered with a perhaps.

But alas,
> this means that the beast’s horns are growing
> out of the back of its neck instead of immediately
> above its eyes; all four legs are planted firmly
> on the same level, so the disproportionate
> narrowness of the belly is a problem; and the
> great width of the hind legs is unexplained. Not
> to mention the fact that there are teeth and snarl
> lines between the legs.


By now you know that I had mentioned deficiencies that I perceived. Your point about the horns seeming to grow our of the back is new and reasonable, but I don't have an issue with the disproportion at present. As for the hind legs, I am inclined to think that there's too much ambiguity given that the carvings there look less clear to me. I suspect that region was subject to erosion, but I'll bet that we've gotten pretty good at guessing what might have been there originally, as were your further elaborations here.

>
> It’s also not a small issue that, AFAIK, ibex
> does not appear in the faunal assemblage at
> Gobekli Tepe.

I agree, that this deserves significant attention - that and where the ibex is believed to have once roamed. But so does the corpus's overall orientation towards style, imo, for the more of that there is, the more room there is to say that our carved image du jour might be an ibex.

Here's one example from a quick internet grab. [www.pinterest.ca] The image on the top, I would say, is very likely some sort of horned animal. Yet no animal has its horns perpendicular to the body when viewed from such an angle. As far as I know, such juxtapositioning is literally impossible, but the interpretation should probably stand albeit on clearly stylistic grounds. How much of this is going on at GT?


At this juncture, and especially with this stylistic-impossible precedent: I don't think you've made the case that Martin's interpretation is NOT possible. So, if we're talking about that being a pillar in his case, the pillar still stands. 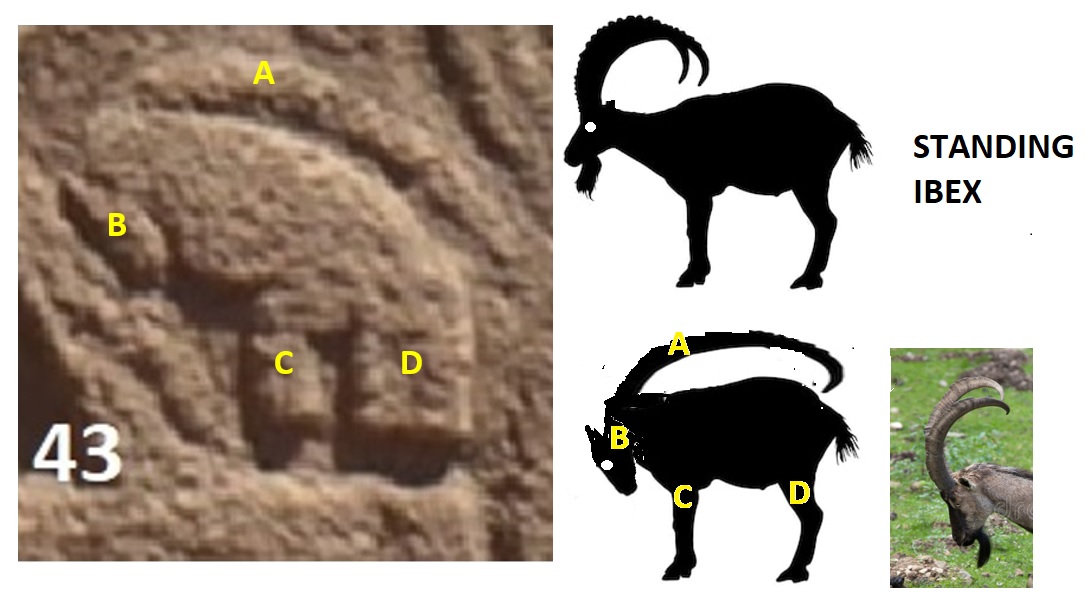 >
> On the other hand, the feline interpretation has
> all the elements in the right place and proper
> proportions, and matches other feline images at
> Gobekli Tepe in form and attributes. To a viewer
> familiar with the corpus, the image is
> unambiguous.

And this is a good interpretation, now that you've shown it to me. Good, on its own and certainly in relation to the other images that are posted in your reply (which I presume to all be from GT.)
But there's a snag here, imo. I would say that the tail is too close to the body, and that normally, when such tails are depicted - here and elsewhere - they are very consistently shown as having much more separation between the body and tail - as one sees with the other nearby "GT" images.

That being the case, I would be inclined to say that the tail positioning is likely a stylistic juxtapositioning. And if I can grant that for the feline, I should consider the same possibility for the ibex's horn, rather than regard it as "totally unrealistic." I would say the stylizing is less egregious - if we can call it that - in case of the feline, owing to how the base of the 'tail' does provide a correct fit than the base of the 'horn' does, in the case of the ibex.

That said, in light of what you've shown me viz your reply to my post yesterday - and I have enjoyed playing along - at this point I may be inclined to agree that the feline interpretation is better than the ibex one, but if so, not by much. It's certainly reasonable, even without the other images being from GT, but all the more so if they are. If the cut lines in the ibex's 'hind legs' region are shown to be perpendicular to the hind legs, then a pretty good case can be made that they are teeth, and that the legs are part of a head.