Author of the Month :  The Official GrahamHancock.com forums
Join us at this forum every month for a discussion with famous popular authors from around the world.
Welcome! Log In• Register
Go to: Forum Home•Board•New Topic•Search
Monkeys bashing typewriters does not stack up
Author: Robert Jameson ()
Date: June 23, 2019 10:09AM
Hi Greengirl,

The monkeys bashing typewriters concept does not stack up. If you crunch the numbers the probability of the monkeys typing out even a single paragraph is zero.

So lets look at your 10 monkeys that had an eternity. First thing to say is that they did not have an eternity – monkeys have only been around a few million years - but the universe has been around 13.7 billion years; so I will allow 13.7 billion years. Also, 10 monkeys will not get you very far so I will allow as many monkeys as atoms in the universe; (i.e. 1080 – that is a figure 10 followed by 80 zeros). The following exercise assumes the monkeys have two tries (making the paper clip or typing something on a type writer) every second since the Big Bang. And as mentioned earlier in this thread, Theoretical Physicist from Cambridge University, Neil Turok calculated the probability of the Universe popping into existence by accident and he found the probability was 10120. That is 10 followed by 120 zeros. (refer BBC documentary Testing God – Episode 1, Killing the Creator.) 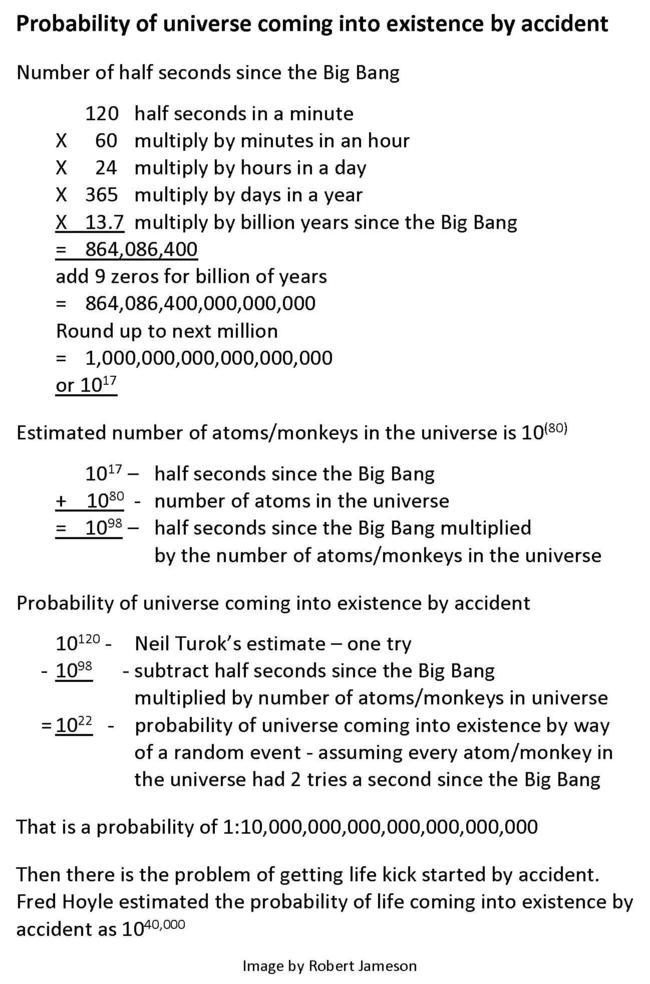 I was at one of Richard Dawkin’s presentations (Melbourne Town Hall in 2009). Dawkins was asked the probability of each one of the several hundred people present at his talk; just happening the be sitting in that particular seat. Dawkins said to calculate the probability you would need to be writing zeros until the end of time. So even the world’s most famous atheist seems to understand probability – not stupid – just a very good liar.