Gunpowder, Treason & Plot :  The Official GrahamHancock.com forums
This is the board for you if you wish to discuss or explore conspiracies of any kind, historical or current.
Welcome! Log In• Register
Go to: Forum Home•Board•New Topic•Search
Re: Lockdown or not - no clear answer
Author: Robert Jameson ()
Date: May 09, 2020 03:07AM
OCaptain wrote:
And just exactly which vaccines cause autism?

I should point out again that I am not an expert on vaccines. However there does seem to be ample evidence that vaccines are not safe, that they have been responsible for an increase in autism and that the CDC (Centers for Disease Control) has tried to cover this up.

I shall again refer to the notes I took when viewing Episodes 3, 6 and 9 og the 9-Part Documentary series by The Truth About Vaccines.

From Episode 3:
16.50 minutes:
Dr Paul Thomas M.D. said he was having numerous parents tell him that their children were normal until they had been given the MMR (measles, mumps, and rubella) vaccine. The parents were telling Dr Thomas that their children regressed immediately after receiving the MMR vaccine.

18.10 minutes:
In 2004 the US Congress commissioned a study into the effect of MMR vaccine. This 2004 CDC report found no link between the MMR vaccine and autism.
William Thompson was the head researcher for this 2004 CDC study. Thompson later admitted he participated in the removal of data from the 2004 CDC report. Thomson said the data removed from the 2004 CDC study showed adverse effects of the MMR vaccine. William Thomson later apologised for his wrongdoing.
In 2005 Dr. Brian S Hooker PH.D published a paper on the neuro degeneration in African American communities. Hooker, with information provided by William Thompson, was able to show the original data collected in the 2004 CDC study found there was a 300% increase in autism in African American boys who have received the MMR vaccine; and a significant increase in all communities. 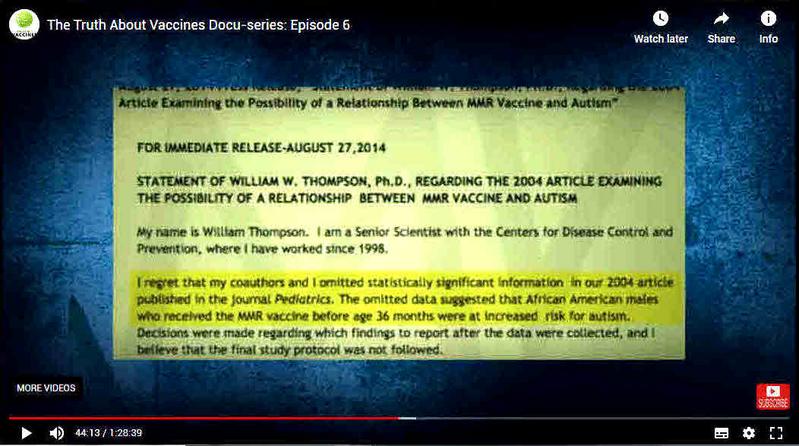 From Episode 6
31.00 minutes:
Dr Brian S Hooker PH.D said the CDC destroyed evidence that showed an association between the MMR vaccine and autism. Since 2001 there have been over 100,000 African males born with autism in the United States.

1.15.00 minutes:
Dr Judy Mikovits – was fired from her job with the NIH, she was held in jail without charge and bankrupted.
Dr Judy Mikovits said they unknowingly introduced a new family of retroviruses into the human population. These retroviruses are associated with leukemia, cancer, lymphoma disease, neurological disorders, autism, Parkinson’s disease and a whole range of auto immune disorders. The vaccines are contaminated with retroviruses.

From Episode 9
48.00 minutes:
We have one in thirty children with autism. And based own the CDC’s own data, that will be one in two by 2032. So, in 2032, a person will be suffering from autism or be caring full-time for someone with autism. This means essentially there is no economy, no businesses, no hospitals, no social services, no police force, no army.