The ship of the sun in Egypt 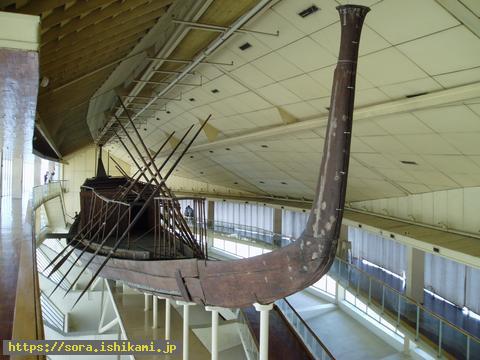 The photo is from a person who has been to Egypt

They say there are scars which show it actually cruised in the open ocean.
No nails are not used in the ship.
We can find the bow of it abnormally long.
That's why Stone human pulled the ship in the sea(?), I was told through the channeling.
When it entered into the river, it proceeded by working at the oars, I was told.
They say it was found in the desert near the Great Sphinx.

Archaeologist of US and Egypt found twelve giant wooden ships in the desert.
The size of them are from 15m to 18m.
It is regarded they were built five thousand years ago.

I was informed from 'THE UNIVERSE(THE SKY)=SORA' that these ships are the evidence which can prove the ancestor of Israelites and Palestinians was the same.