Late Kadafi told through the channeling as follows at night on Dec,&#65297;.
He told that he heard the teaching of Islam until then was erroneousd and we should not monopolize the wealth of the earth, consequently he tried to execute it .
Late Kadafi descended to me when I was passing over Libya for Malta.
However I didn't take notes becaue I doubted what was told to me through the channeling.
As there are lots of Remains in Libya, I wanted to go there some day.
As it blew a gale last night I went to bed wondering what was happening.
I woke up at midnight and the channeling has started.

I'm the man who died.
I'm in the world over there.
The beings from the stars told me to descend and convey you.
I was alway working.
What I wanted was how to make people happy.
And yet I didn't think I had been grudged.
I have waited the truth would be conveyed eventually.
I want what I had done to be looked over.
I can't bear the too cruel treatment.-----


The above words came out of my mouth.
As I didn't know well about Kadafi, I searched the web sights.
[www.youtube.com]

When I read the above site, I found what he said with all his might was true and I became full of tears.
I thought what have been told by media is too far removed from what he told me.
Of course as he was an authority for a long time, he might sometimes be ruled and went out of control.
They say Libya before Kadafi was the poorest country and the funds gained by crude oil had profited only royal family.
However after Kadafi, educational expenses, medical expenses and electricity charges became free.
Gasoline is ritter \ 10, no tax, no interest on a loan.
The whole nation were able to have their own houses.
Newly&#8208;married couples were provided housing subsidies of fifty thousand dollars.
The unemployed persons were provided houses without compensation.
The government burdened half the expenses of the car when people bought the car.
Those who want to start the agriculture were all provided the land, the house, cattles, feedstuff , and so on.
Those who want to be pharmacists were provided all the necessary expenses.
The woman who gave birth to a child was provided five thousand dollars.
Those who were not able to take a job after school graduation, were provided suitable payment until they were able to take a job.
The 25% of the people had bachelor’s degree.
A part of proceeds of oil was provided to all the people in cash.
Kadafi seems to have distributed the wealth of the earth equally as is shown in the above examples.
It was natural the support of the people was great and the number of a demonstration which suported him was as many as 1700000.
Nevertheless he is reported as a dictator.
They say Hugo Chavez in Venezuela had the similar policy.
The internet information tell us why Kadafi was killed.
I thought we really know nothing. 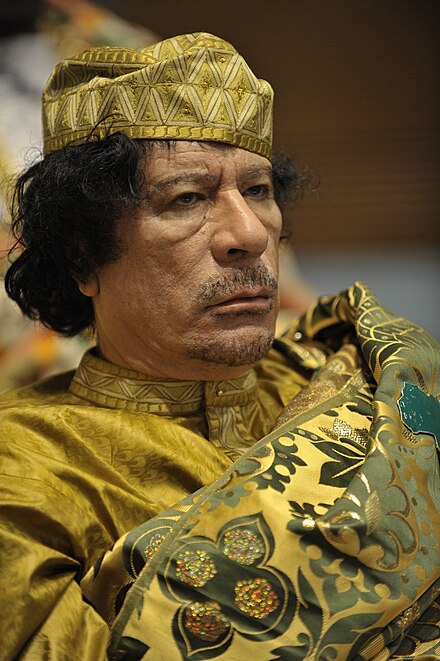