Paranormal & Supernatural :  The Official GrahamHancock.com forums
For discussions of everything that might be classed as ‘paranormal‘ - i.e. not currently accepted by our modern scientific paradigm.
Welcome! Log In• Register
Go to: Forum Home•Board•New Topic•Search
The stone chamber of Locmariaquer
Author: Sennari ()
Date: October 28, 2013 11:34PM
The stone chamber of Locmariaquer

It seems the pebbles fell around it(?) or they were livened up later?
The stone chamber is covered with the huge stone slates and the triangular stone inside the stone chamber supports them.
The pebbles around the stone chamber expresses atoms.
I was told atoms gathered together and became various creatures.
The stone chamber was the school which told atoms what they would turn into.
Stone god made Dolmen so that atoms would be taught more firmly while they passed through it.
I was told the tunnel of the stone chamber is the school gate.
There are 16 groups of large and small pebbles which are separated from the school gate and are lining up in a row.
I didn't quite know the meaning of it.
However I was told atoms which formed the shape didn't go away from the school gate immediately and they went away after they turned around stone chamber in order to fix the shape of them more firmly.
The pattern of the deformed whirlpools are drawn densely inside the stone chamber.
As there was no fingerprints on the fingers of the giant, I was told the giant who turned into the stone chamber asked humanity to draw them.
The pebbles were not piled up but alter ego of Stone god gave the direction to the atoms of its body so that they would turn into this shape and atoms became these shapes themselves.
As the material is made up with the body of Stone god, I was told it was possible to do so even though humanity had no power when they asked atoms.
It may beyond human imagination when compared with the human ability. 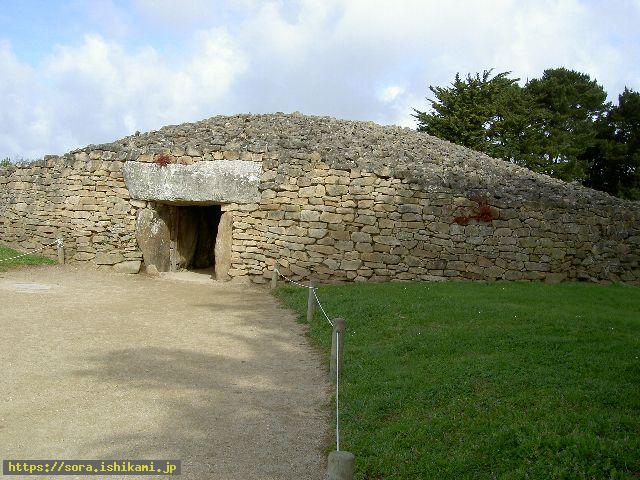