Paranormal & Supernatural :  The Official GrahamHancock.com forums
For discussions of everything that might be classed as ‘paranormal‘ - i.e. not currently accepted by our modern scientific paradigm.
Welcome! Log In• Register
Go to: Forum Home•Board•New Topic•Search
Despite the Irony
Author: Dr. Troglodyte ()
Date: August 03, 2018 04:04PM
KsFisher Wrote:
-------------------------------------------------------
> Daniel,
> Maybe the best explanation is simply frustration.
> There are many obvious problems with current
> archaeological theory and practice which stem from
> errors dating back to the sciences infancy in
> North America and maybe slightly earlier in
> Europe. There is no place in theoretical science
> for mere speculation such as that which
> archaeology has long been subject to. When mere
> speculation replaces gainable understanding and
> unchecked becomes a large part of long-accepted
> theory it becomes more than an issue. Eventually,
> it renders the science ineffective. Not that a
> course correction would be so difficult but
> compounding issue number two is a hierarchy of
> academia which has no place in science refuses to
> examine any possibility of mistakes having ever
> been made by their predecessors. If you are
> familiar with Ales Hrdlicka and the travesty he
> perpetrated on the science by throwing all of
> humanity under the ignorance bus for nothing more
> than his own ego you would likely find these same
> practices being perpetrated to this very day.
> Study the picture I have linked closely. If an
> archaeologist told you it was indeed an artifact
> would you take issue with that assessment? If an
> archaeologist told you it was nothing more than a
> naturally occurring rock, would you take issue
> with that assessment? I can tell you as an
> avocational archaeologist, which I never intended
> to be, that it is most definitely without a shred
> of doubt an artifact. You would play hell finding
> a professional archaeologist in North America who
> would concur with that assessment. The difference
> being that I have spent countless hours studying
> similar artifacts to the point that I am
> completely familiar with the patination and
> erosion processes of many different types of stone
> as well as the individual functionalities uses and
> wear patterns associated with most of the
> artifacts I collect. A process which includes the
> creation of lithic reproductions for testing by
> applying them to the exact same tasks they were
> designed for with identical wear patterns being
> produced. The professional archaeologist would
> complacently dismiss it without so much as picking
> it up to examine it because it lacks conchoidal
> fracture as well as fear of ridicule he would be
> subject to by his colleagues for investigating a
> stone with a facial likeness on it. I have seen
> only one archaeologist take enough note of one of
> the most perfectly etched faces on a stone I have
> ever seen, that he actually posted a pic on an
> archaeological forum site. The words which
> accompanied the pic: " If I didn't know any
> better". It received the expected eye roll
> responses from his colleagues. My question: Where
> does this Knowledge come from and what scientific
> substance supports it? I could expand on many more
> flawed theories and lack of understanding but I'll
> rest my case here for now. Opinion? 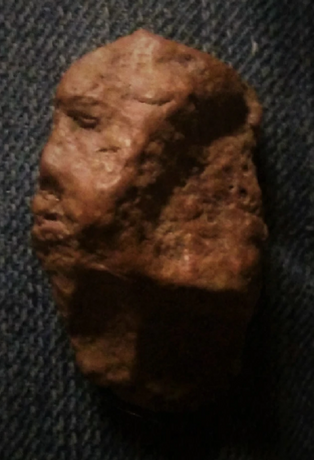 Hello KsFisher; you wrote: ”Study the picture I have linked closely…

I can tell you as an avocational archaeologist, which I never intended to be, that it is most definitely without a shred of doubt an artifact…

My question: Where does this Knowledge come from and what scientific substance supports it?


If the stone is indeed an ”artifact”:

• What is the provenance of the stone?
• What was the context of the find’s location?