Paranormal & Supernatural :  The Official GrahamHancock.com forums
For discussions of everything that might be classed as ‘paranormal‘ - i.e. not currently accepted by our modern scientific paradigm.
Welcome! Log In• Register
Go to: Forum Home•Board•New Topic•Search
Re: You're new here, aren't you
Author: carolb ()
Date: March 15, 2018 11:40PM
IXOYE Wrote:
-------------------------------------------------------
> These are real world admissions and observations
> from NASA, they should cause a critical thinker to
> consider that what they here from NASA and learn
> from real evidences is worthy of further
> consideration.
>
> NASA and OBAMA admitting they have only
> accomplished Low Earth Orbit.
>
> [www.youtube.com]

This claim is so ridiculous that it shows how little thought went into the making of this video. The flattie who made it ignored the context, and provided a perfect example of how those who believe the earth is flat have no understanding of what they’re talking about and perpetuate their ignorance through YouTube. There, like-minded gullible followers pick it up and run with it, never questioning it or applying any sort of critical thinking to what they’ve seen.

NASA is talking about current 21st century technology, not 1960’s technology, which has long been obsolete. Why NASA, or indeed any space agency, would send astronauts beyond low-earth orbit in outdated spacecraft never seems to occur to these people. The Orion technology, which they’re discussing, contains sensitive electronics which have to be extensively tested in passages through the Van Allen Belts to ensure those electronics won’t be fried from long exposure to radiation. Scientists have to be sure of this before even thinking of placing astronauts in danger. This was never an issue with the Apollo-era craft, which had none of the sensitive computer equipment of today, and which passed through the belts unscathed in just over an hour, exposing the astronauts to a minimum amount of radiation.

The fact that the flatties don’t know this – or don’t care - shows the level of their ignorance and what they claim to be deception on the part of NASA.

> 146 miles between 2 microwave towers over water
> IMPOSSIBLE ON A GLOBE
>
> [www.youtube.com]

If you had bothered to read the comments below that video, you would have seen that those more informed than you had done their homework, and found by simply looking on Google Earth, found that the tower in Cyprus was at a height of over 2000ft, transmitting to one in the mountains of Lebanon above Beirut.

Of course there’d be line of sight over such a short distance from that sort of altitude! Again, no thought went into the claim made by the video maker.

> If we can't believe what is in front of our eyes
> and take the current admissions from NASA
> and OBAMA, what should we believe.

If you took what they actually said, rather than what you want to believe they said, you wouldn’t have any problems with their words.

> It doesn't matter how high you go the horizon line
> is always at eye level. If we lived on a ball
> it would fall away the higher you go. This is a
> really easy experiment to do.

The horizon is not ‘always at eye level’, unless your eye is on the ground. That’s another idiotic flat earth claim, made over and over again but never tested or verified by its followers, just repeated ad nauseum without any comprehension of the claim.

Even on a flat earth, a 6ft tall person would not see the horizon at ‘eye level’. Just get a person of that height to take a photo of the face of another person of the same height who's facing them, with the horizon in the background and see where that horizon lies. It’s a good bit below eye level.

> Why does a airliner detour to Alaska for an
> emergency landing for the birth of a baby when
> flying
> from the Philipines to L.A. It should have landed
> in Hawaii, if the plane was on a globe it would
> have
> passed almost directly over the Islands, BUT it
> landed in Alaska. On the Flat earth model Alaska
> was a direct fly over to L.A.

The flight in question originated in Hong Kong, not the Philippines. Again, the stupidity of flat earthers is on display with their use of a flat map (a projection of a globe) to make their point, instead of using an actual globe. If they had done that, they would have seen that the shortest distance between Hong Kong and LA is an arc of a great circle, which passes over Alaska, and goes nowhere near Hawaii. See this very discussion here. Here’s the great circle route between the two: 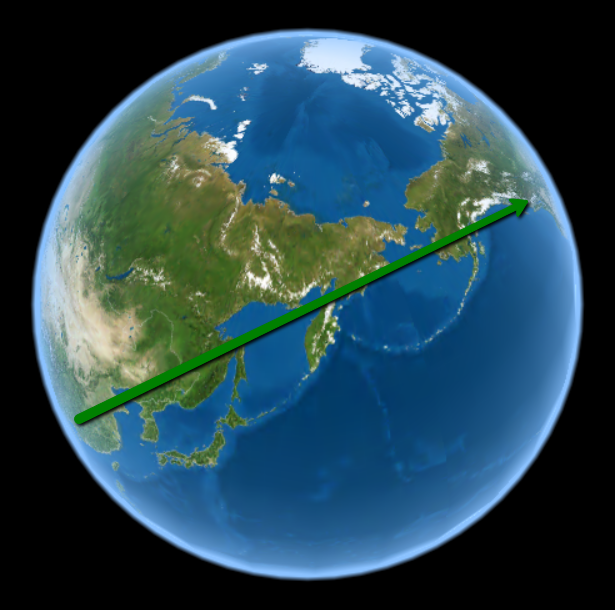 > I am sincerely wanting real world observable
> evidence of a globe. That is why I felt to join
> this BLOG OF CRITICAL THINKERS.

> I have tried to stayed away from anything but my
> own real world observations and solid evidence,
> like the ones
> I have provided here.

You haven’t provided a single shred of ‘solid evidence’, just false claims and misrepresentations, which you haven’t even bothered to check for yourself whether true or not.

> NASA has admitted, they don't have any real
> pictures of earth, they are all CGI, You have to
> question why they haven't provided a 360 degree view from a
> space walk, or real pictures from the HUBBLE
> TELESCOPE.

NASA has admitted nothing of the sort. Here are just a few examples of images of earth from space, including those made before CGI was even invented! They’re from the ESA, NOAA, JAXA as well as NASA. Are these other agencies also conspiring to hide the shape of earth from you?

Here’s the very first picture of earth taken from Lunar Orbiter I in 1966.

Please tell us how CGI was involved in 1966.

Please also tell us why no flat earther has ever produced an image of the flat earth from space. Or why there has never been any report of anyone going over the edge. Why is that?

A google search will provide you with pictures from the Hubble telescope. I don’t know what you mean by your insinuation that they’re not ‘real’.

> Does anyone have anything, other then making light
> of my position, not theories, facts, Thanks.

Read all the above and do some research before you post again, instead of mindlessly regurgitating silly flat earth talking points. I looked up everything I posted here in the past hour or so. You could have done the same, if you’d been bothered to.