Inner Space :  The Official GrahamHancock.com forums
For discussions on all matters relating to personal development, religion, philosophy, psychology and so on.
Welcome! Log In• Register
Go to: Forum Home•Board•New Topic•Search
Do we live in a coherent universe?
Author: Robert Jameson ()
Date: April 11, 2020 11:10AM
I recently watched an interesting TED Talk presentation; The bridge between water and life – Dr. Adam D. Wexler – see: [www.youtube.com] 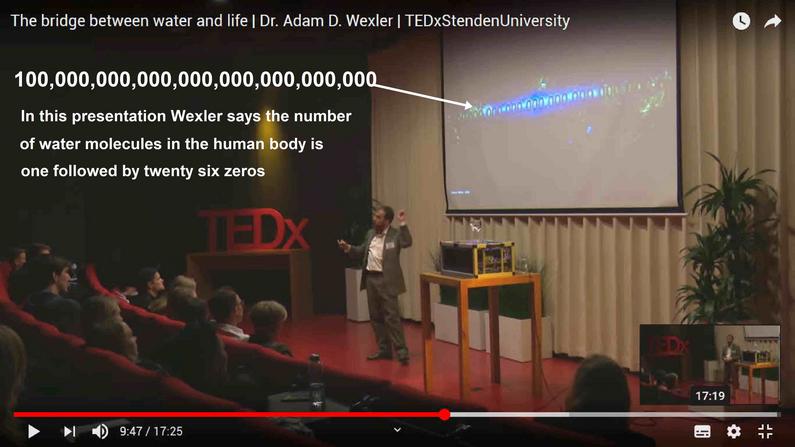 To quote Wexler; Water is universal – it has no boarders.


The work of D. Gerald H. Pollack would seem to support Wexler’s claims. 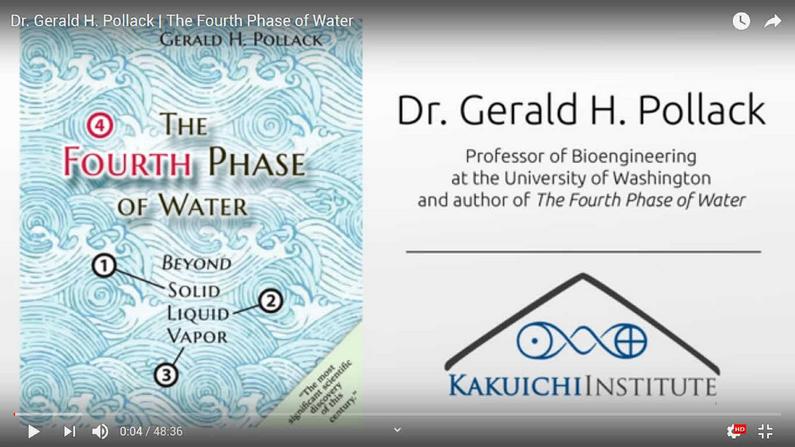 Gerald Pollack is recognised worldwide as a leading researcher into the properties of water. In addition to water coming in a solid, liquid and a vapor, Pollack claims water also has a 4th phase. See - The Fourth Phase of Water: Dr. Gerald Pollack at TEDxGuelphU - [www.youtube.com]


Also interesting are claims by Professor Bernd Kröplin from the Aerospace Institute in Stuttgart, Germany. Kroplin discovered a way of making the structure of water visible. He apply drops of water to slides and looks at them under a dark field microscope. Kroplin showed that students could take drops of water from the same source produced some surprising results. His experiments showed that the individual drops, made by different students, were different from each other. However, drops made by the same student repeatedly showed a similar image in the dried water drop. (For more information, visit Kröplin‘s website at www.weltimtropfen.de/forschung.html, or watch a YouTube video at [youtu.be]. 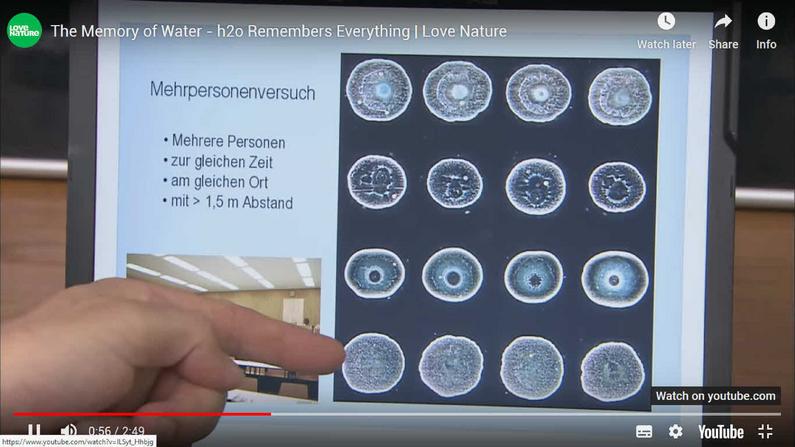 Further evidence that water carries energy and information comes from the work of John Stuart Reid. Reid has developed a devise (CymaScope) that he claims can photograph the "The Holographic Properties of Water". Reid refers to the work of Louis de Broglie.

Quoting from Louis de Broglie:
Cymatic phenomena, in which fluid particles act in a wave-like manner, can be considered a class of Matter Wave, sometimes referred to as ‘de Broglie waved’, which are a central part of the theory of quantum mechanics, being an example of wave particle duality.

Reid then says; If you think of it, every single molecule in … water is essentially a particle, yet it is moving in a wave like manner.

Reid claim his CymaScope can capture the echolocations of dolphins and convert them to a sound image. 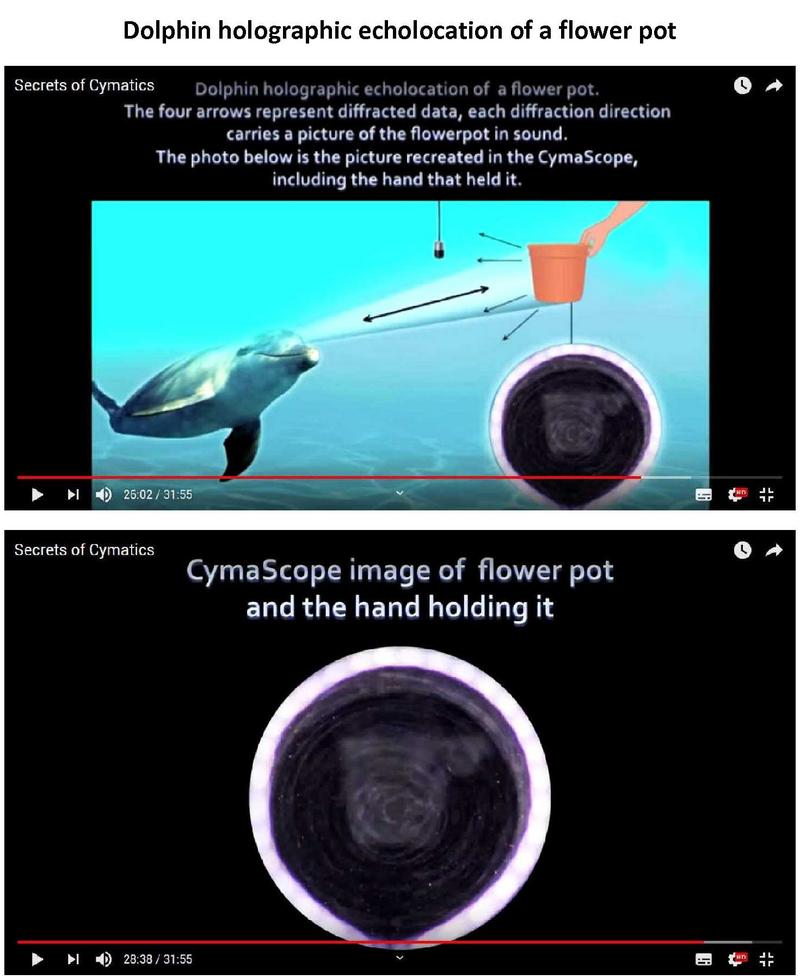 The photo shows the picture of the pot, including the hand that held it, recreated in the CymaScope. 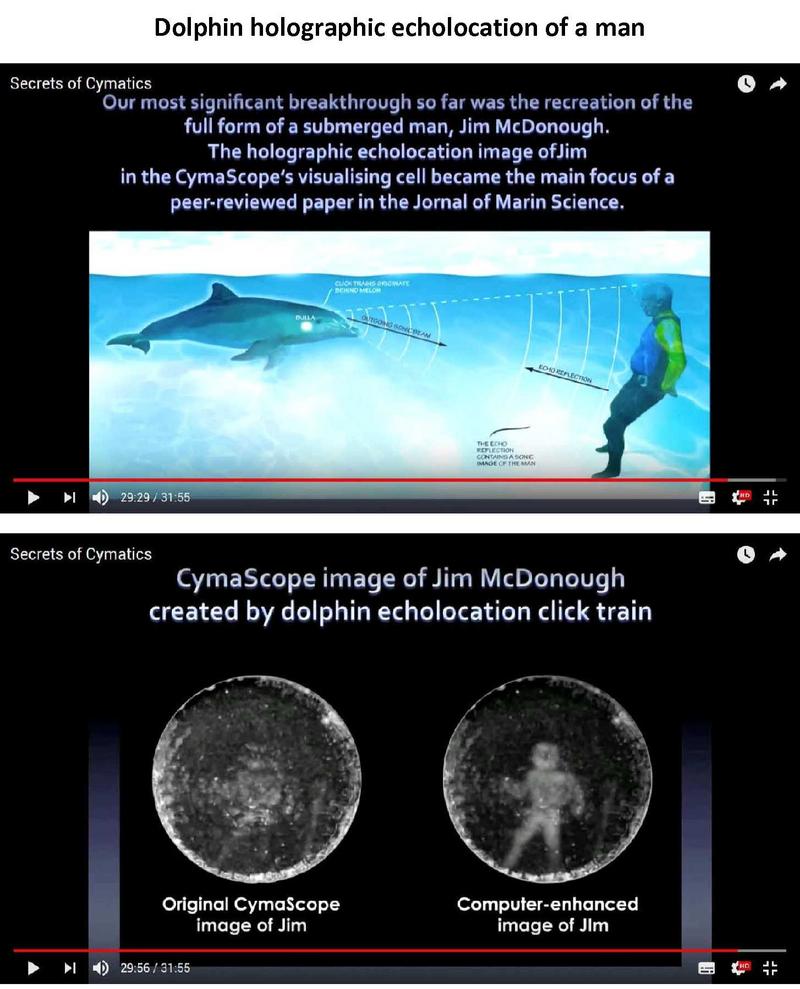 Reid claims their work proves the dolphin is seeing with sound. It means the reflection from these objects, the dolphin’s echolocation reflections, are carrying data, that can be turned back into imagery.


Next we look in more detail at the claim that water has quantum like properties. Jim Khalili is the Professor of Theoretical Physics and Chair in the Public Engagement in Science at the University of Surrey. See - How Quantum Biology Might Explain Life’s Biggest Questions | Jim Al-Khalili | TED Talks - [www.youtube.com] and; Ri Channel - Jim Al-Khalili - Quantum Life: How Physics Can Revolutionise Biology - [www.youtube.com]

FOLLOWING ARE SCREEN IMAGES AND MY NOTES FROM THE ABOVE VIDEO PRESENTATIONS:

The above presentations give many examples where quantum physics is thought to play a role in biology. In photosynthesis for example; Jim Khalili claim is that the photon, the particle of light, that is captured by a chlorophyll molecule, and is then delivered to what is called the reaction centre, where it can be turned into chemical energy. And in getting there, it doesn’t just follow one route, it follows multiple pathways at once, to optimise the most efficient way of reaching the reaction centre, without dissipation as waste heat. 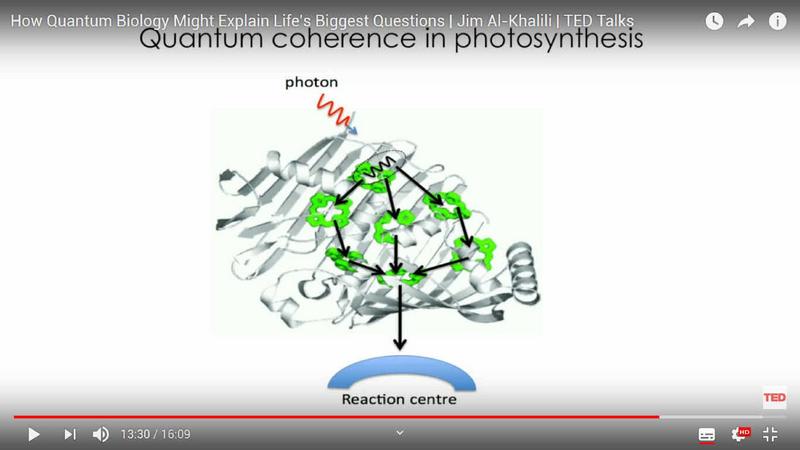 He also claims the migration of European Robins, along with many other animals and insects, utilise a form of quantum biology to sense the earth’s magnetic field. 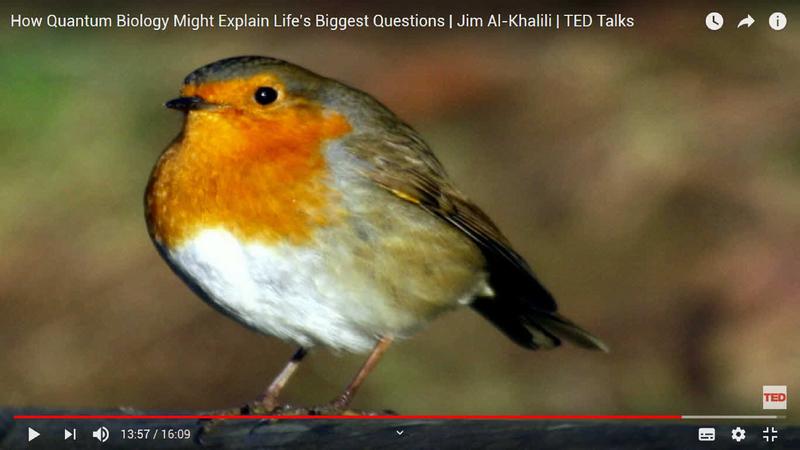 In his Quantum Life Presentation Jim Khalili notes that often the hydrogen atom can jump from one place to another within a molecule. And also what we find is molecules stuck together with the glue that is a hydrogen bond. It is the hydrogen atom (the nucleus of hydrogen) that proton, in the bond, which is holding two molecules together. It likes to sit closer to one side than the other. In fact it can sit on either side – what it does not want to do is to sit somewhere in the middle. It is most comfortable (energetically) to be on one side of the other. We know that sometimes the proton can jump across – but to do that it has to quantum tunnel. It has to punch through a force field. You can see that process happen – chemists have studied it very well.

Below we can see the shape of the energy surface. Imagine you have two wells – two dimples – two holes. And you have a ball sitting in one of the wells/holes. That ball can’t jump into the other hole unless you give it a bit of a kick – to knock it up over the barrier over to the other side. Quantum tunnelling would say you don’t need enough energy to get over the barrier – it can somehow just magically tunnel its way through the barrier. 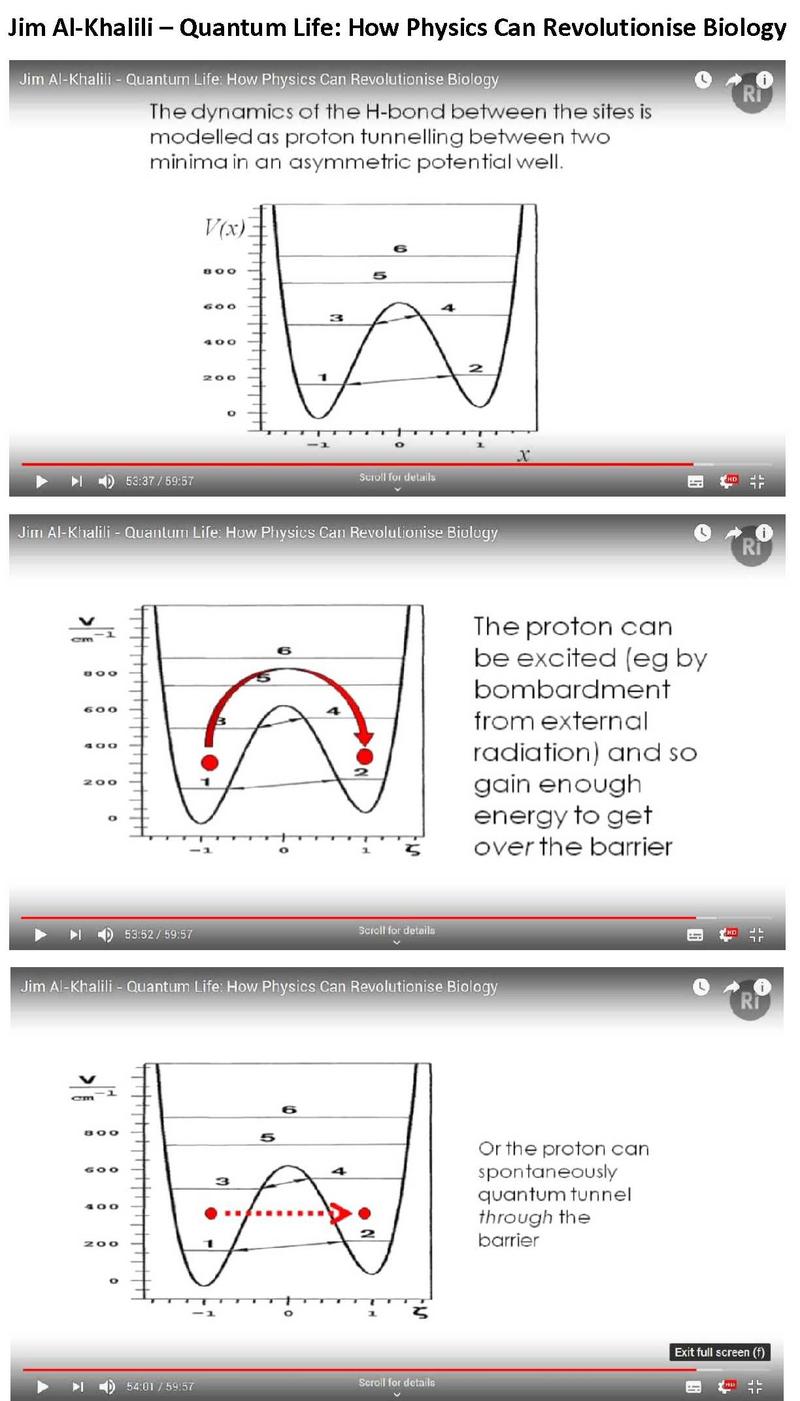 Quantum theory is at the route of everything.

Quantum mechanics can explain why it is that atoms bond together to form the molecules like protein in DNA and RNA, on which all life depends. So in this sense, quantum theory is at the root of everything.

It was known by the early 20th century that chemical bonding is all about the electrons that atoms contain. Earnest Rutherford had proposed that atoms are like little solar systems. With this very dense very massive nucleus with tiny electrons orbiting around … Then Niels Bohr said that those electrons can only have specific energies – and not others – and they can only adopt some orbits and not others. 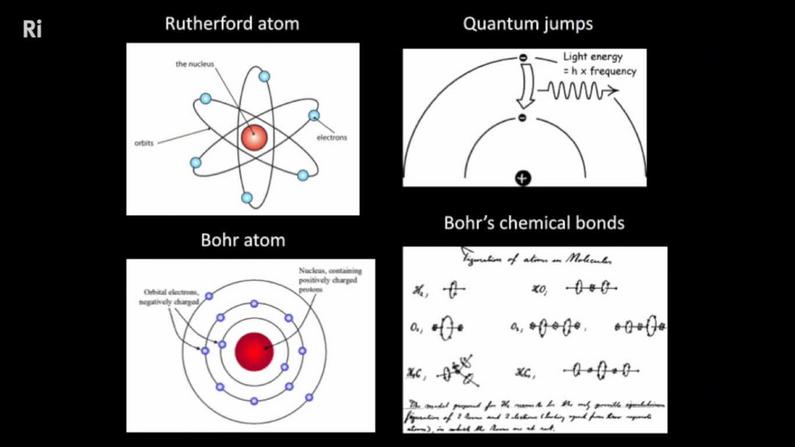 Electrons can jump from one orbit to another – by absorbing or emitting energy – for example by swallowing up – or spitting out a photon of light – with a particular wave length – a wave length that is related to its energy. When electrons do this they are said to make a quantum jump. Bohr outlined how electrons can adopt quantised orbits that link two or more atomic nuclei and would then join them together in a chemical bond.

This wave like behaviour has been seen in some quite large molecules – molecules that are made up of dozens of atoms. Some researchers are aiming to show that proteins, the whole protein molecule, can also behave like waves.

We earlier discussed the fact that earth has countless mysterious ancient buildings and artefacts – some hundreds of millions of years old. These out of place artefacts (OOPArts) cannot be explained by any conventional historical model.

In quantum physics a particle is ‘spread out’ – see also my post on Possible Explanation for the Double Slit Experiment: [grahamhancock.com] - Maybe every action we take is ‘spread out’ – and maybe every action taken by entities in other places throughout the universe are ‘spread out’ in some form of cosmological quantum wave function? Is it possible that the mysterious ancient buildings and artefacts and anomalous geological formations are the result of structures built in distant places? Are OOPArts the manifestation of a coherent universe? And are mysterious buildings and artefacts part of a wave function, existing in all possible spatial and time dimensions, only to be collapsed into a single point by some form of human like observation? Maybe, like the quantum particle, OOPArts do not have a definite position in space – and they only adopt a definite position when we observe them.