Inner Space :  The Official GrahamHancock.com forums
For discussions on all matters relating to personal development, religion, philosophy, psychology and so on.
Welcome! Log In• Register
Go to: Forum Home•Board•New Topic•Search
The Many Worlds Theory
Author: Robert Jameson ()
Date: March 13, 2020 04:09AM
In previous posts to this thread I have suggested a type of cosmological biological ‘copy and paste’ of out of place artefacts might explain the numerous mysterious ancient buildings and anomalous geological formations. I have argued that building and artefacts that were designed and built in remote parts of the universe might have been copied and pasted to earth – and to many places throughout the universe. Thus explaining the existence on earth of OOPArts that are hundreds of millions of years old – or ancient buildings and artefacts and anomalous geological formations that do not fit any known scientific or historical paradigm. See below image of more megaliths being discovered beneath the existing megalith that was thought to have been abandoned in the Baalbek quarry.

Megaliths, weighing hundreds of tonnes, piled on top of each other like this have no possible explanations in terms of any conventional scientific of historical paradigm. 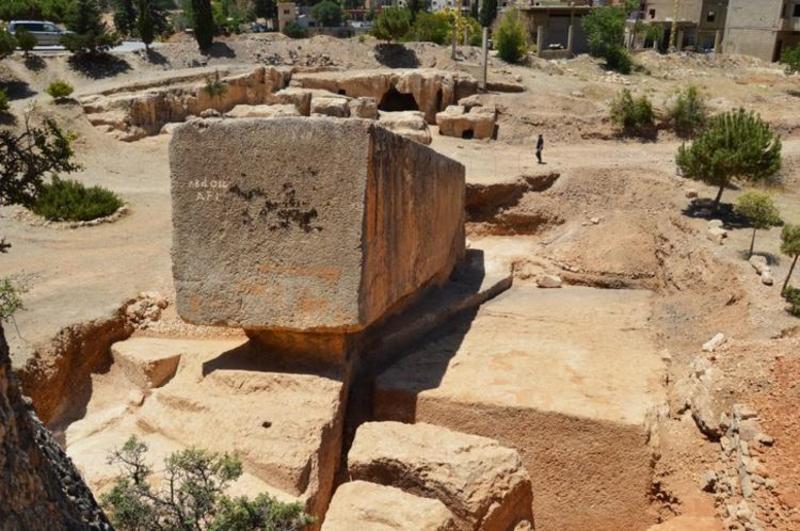 Recently I read an article (and viewed a video clip) that suggests another possibility. The article was posted to my email inbox by Nexusnewsfeed.

Physicist says parallel universes definitely exist and we may soon explore them -
[www.nexusnewsfeed.com]

In this article Theoretical physicist Sean Carroll expressed that clues in the small-scale structure of the universe point to the existence of numerous parallel worlds. Carroll says that the fact that tiny particles like electrons and photons don’t have one set location in the universe is evidence that there are many parallel universes.

The Nexus Newsfeed article also linked to a 21 minute interview where Joe Rogan (Joe Rogan Experience) spoke with Sean Carroll. Following are the notes I made from comments by Joe Rogan and Sean Carrol during this interview.

NOTES FROM INTERVIEW WITH JOE ROGAN:

Theoretical Physicist Sean Carroll; ‘… electrons and photons do not have one set of locations in the universe.’

Carroll continues; physicists have always assumed that quantum mechanics applies to the whole universe. This however becomes unmistakable when you look at little tiny bits such as electrons and photons. Electrons and photons do not have defined positions.

He says electrons (electrons being waves – not particles) are all spread out but they obey a set of rules (the Schrodinger equation) and you can predict what happens next - but the weird thing is that there is a whole different set of rules when you look at the thing – when you observe it – when you measure it.

Joe Rogan asks; ‘is it the act of measuring it that changes it?’ Sean replies; that is the problem – the measurement problem of quantum physics. Measuring spin up or spin down is an empirical measurement – totally predictable – measuring spin up or spin down does not change it. However, when an atom decays the electron goes out in all directions – but when you look at it you don’t see a wave but what you see is a straight line – that is the fundamental mystery with quantum mechanics. So how we describe the thing when we are not looking at it is different from what we see when we are looking at it.

Carroll continues; The Many Worlds’ theory is a possible answer to what is going on.

Many Worlds say that what the classical Copenhagen interpretation is missing are two things:
ONE – You are a quantum system. You obey the rules of quantum physics, you are made of atoms and you have a wave function too. You were treating yourself as a classical system when you made that measurement but you really should be treating yourself quantum mechanically.
TWO – Entanglement. There is not a wave function for every individual particle. Sean Carroll says there is only one wave function for the whole universe. Two particles that interact have a wave function – so if you measure one you can know where the other one is going – that is entanglement – the observed state of one system can be related to the observed state of the other system.

Sean Carroll then discusses Hugh Everett – inventor of the Many Worlds theory. Everett said; when you measured that system you are a quantum mechanical system too. You look at the electron and your wave function changes. It used to be that you were you and the particle was reacting to your observation – but the Many Worlds theory says that when you measure the electron you become entangled with it.

Carroll seems to be saying; rather than electrons reacting to each other (or being entangled) that the electron splits into two different worlds. Carroll continues; there are two separate worlds – both are part of the wave function and are real – but they are in separate worlds that will never interact with each other. What happens in one part of the wave function will not affect what happens in the other – but both are real. So there is a version of you that saw the electron spinning clockwise and there is another version of you that saw it spinning counter-clockwise.

Is it possible that mysterious ancient buildings and artefacts, and anomalous geological formations, exist in some form of quantum super state? First appearing in a remote part of the universe where they were conceived of mentally and built – but also existing in other worlds - one of those other worlds being earth?