That is not quite accurate. The Earth's core rotates faster than the Earth's crust. See here. So we have a solid crust, floating on a liquid mantle, which is above a solid core, each rotating at different speeds. It is therefore possible for the crust to slip. The mathematics describing "true polar wander" permit it. Most likely any such slippage would range from less than a single degree of arc to much less than a single degree of arc. So no, almost certainly not the case that the Earth's crust would slip 45, or 90, or 180 degrees. But a few degrees over periods of time - yes. Geologists don't really dispute this. Big slippages, like Velikovsky asserted - yeah they dispute that.

Also, the slippage does not occur as a single event. It is likely to be a sequence of small slippages, each a fraction of a degree of arc. One of the best pieces of evidence that this occurs is demonstrated by the creation of the Hawaiian island chain. The crust moving over the hot spot, slipping and then pausing, is what created the island chain. The slippage is about 3 degrees of arc, and took place over millions of years. In other words, plate tectonics plus true polar wander. See image: 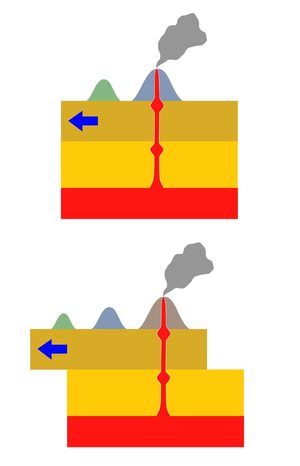