Global Village :  The Official GrahamHancock.com forums
For good-natured and mutually-respectful discussions of politics and current affairs. Soap-boxing and the promotion of extremist causes motivated by hate will not be tolerated by our moderators.
Welcome! Log In• Register
Go to: Forum Home•Board•New Topic•Search
Re: Living God may be a paedophile
Author: David L ()
Date: September 02, 2005 07:52PM
Richard Fusniak wrote: 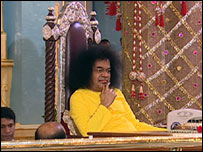 >
> Sai Baba, now 78 and somewhat frail is the center of
> accusations about sexual abuse to young devotees and initiates.
> Strong resistance is being put up to make sure a proper enquiry
> is thwarted - seems like the living "God" cannot do anything
> wrong!
>
> Richard Fusniak

This is old news. When I first got on the internet in 1994, I read about it on the Neural Surfer web-site. The guy has some powers, and he can draw people to him, but his physical & etheric projection is a major turn-off for me. To each his own, though...
David