Mysteries :  The Official GrahamHancock.com forums
For serious discussion of the controversies, approaches and enigmas surrounding the origins and development of the human species and of human civilization. (NB: for more ‘out there’ posts we point you in the direction of the ‘Paranormal & Supernatural’ Message Board).
Welcome! Log In• Register
Go to: Forum Home•Board•New Topic•Search
Re: Menkaure's Sarcophagus Revisited
Author: Thanos5150 ()
Date: July 22, 2015 05:16AM
eyeofhorus33 wrote:

> Hello Willie
>
> You wrote:
>
> "I'm not 100% sure that these drawings do represent an actual
> building as this style of facade could've been adopted
> somewhere along the way."
>
> The palace facade decoration predates Menkaure rather than
> being a stylistic convention that was adopted "along the way"
> and can be traced back as far as Dynasty 1. Mastabas at the
> Tarkhan cemetery exhibit the palace facade design, though you
> have to use your imagination as time has not been kind to these
> mud bricks:
>
>

> The palace facade on the sarcophagus is the mastaba in
> miniature. Like the mastaba, the sarcophagus houses the body of
> the dead king. It's an expression of cultural tradition, an
> artistic metaphor and a reminder of the deceased's status.

Palace facade (interior walls) tombs first appear at Abydos in Dynasty 00 along with Mesopotamian artifacts and burial practices. The use of palace facade architecture continues to be an integral part of public structures until the 3rd Dynasty then disappears becoming relegated to symbolic decoration in tombs. I think this means something on several levels, namely a change in ideology/administration. 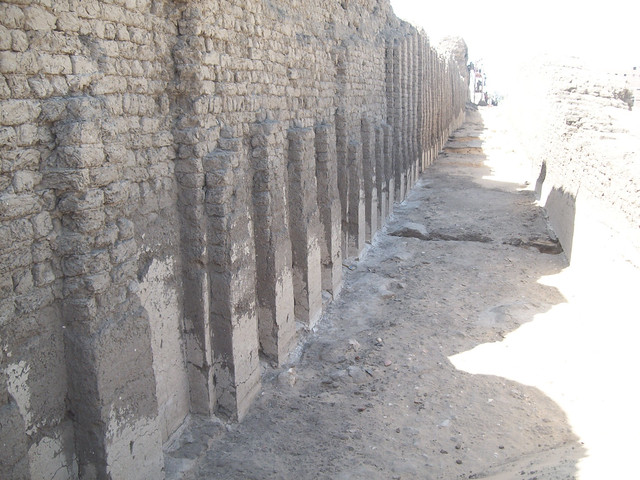 What it would have looked like finished (Mesopotamian style sun dried bricks on the interior, kiln dried on exterior): 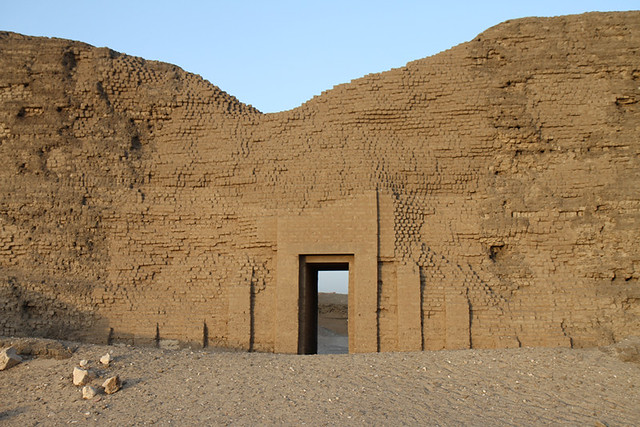