Mysteries :  The Official GrahamHancock.com forums
For serious discussion of the controversies, approaches and enigmas surrounding the origins and development of the human species and of human civilization. (NB: for more ‘out there’ posts we point you in the direction of the ‘Paranormal & Supernatural’ Message Board).
Welcome! Log In• Register
Go to: Forum Home•Board•New Topic•Search
Menkaure's Sarcophagus Revisited
Author: Thanos5150 ()
Date: July 19, 2015 06:34AM
Was Menkaure's sarcophagus original to G3?

In Operations carried on at the pyramids of Gizah in 1937, Howard Vyse describes entering the main chamber of G3 and his discovery of Menkaure's sarcophagus. Of the chamber he notes that it contained a "great quantity of rubbish" and also "black dust" (which reminds one of the black dust reported in the RC of G1). He says the position of the sarcophagus was supposed to be in the center of the chamber yet it had appeared to him to have been moved against the wall.

He describes the sarcophagus as having finely cut compartments (palace facade) and "ornaments" upon it that resembled to him architectural decorations found in the "tomb of Numbers" and those carved on two blocks of stone then exhibited in the British Museum. He says it had no hieroglyphs or inscriptions and no lid was found in the chamber though he claims to have found pieces of it, namely "the greater part" of it, later amongst piles of more rubbish in another chamber (chamber with 6 niches) which is located outside the burial chamber, down a passage, and at the bottom of several steps. In this chamber he also found fragments of the top of a mummy case inscribed with hieroglyphs which included the cartouche of Menkaure, something most agree to be intrusive probably dating to the late Egyptian Saite Period. According to Vyse the lid would have been fixed with two pins, a dovetail, and a groove was cut across the rim of the top which he suggests was to be able to insert a lever for removal.
Operations carried on at the pyramids of Gizah in 1937p80-87

These are the drawing Vyse offers in his journal: 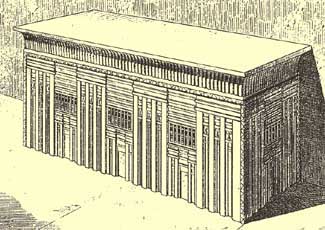 This drawing, which differs in several subtle ways from Vyse's drawings, was published by Gaspero in History of Egypt, Chaldea, Syria, Babylonia, and Assyria: There are some curious features about their depictions which do not seem to be congruous to sarcophagi of the time period. Compare the drawings above to a nearly identical OK sarcophagus found at Abu Roash, typical of this period:

The problems that arise from Vyse's drawings are namely the lid and the triangular border pattern found along the edges of the corners and near the top. The style of lid is "corniced" which as far as I can tell this particular style did not originate until the MK and later: I see no lids remotely of this kind found in the OK with nearly all being a variation of this (a finished version of what is seen at Abu Roash): 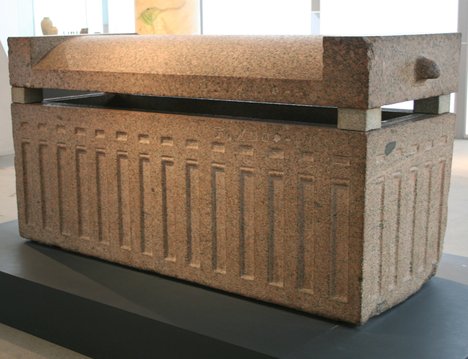 The exception to this would be a very similar sarcophagi and lid attributed to Meresankh III, the wife of Khafre:

(note the hieroglyphs on the corner border)

Regardless, in the MK and onward, the cornice of stone sarcophagi as seen above was not a "lid" and as a rule was actually part of the sarcophagus itself and topped with a wood lid. Such examples are rare and later NK corniced lids were typically made of wood and were removable:

(As an aside, note the sled on the bottom)

We know Vyse did not find the lid remotely intact or even in the same room and regardless was part of the rubbish from an intrusive burial. There are no readily available examples of this style of corniced lid from the OK, but instead are commonly found from the MK onwards sometimes in stone, but usually made of wood. Vyse recreated the lid in his drawings from fragments based on what he thought to be similar lids seen in other places that were later or unclear what era his comparisons were made.

The other problem with Vyse's drawings are the triangular border pattern which also does not commonly appear on sarcophagi in the OK if nearly at all, but the MK and later and does not appear on the borders as depicted in his drawings. Examples of this pattern on sarcophagi from the MK:

There are examples of from the OK and later that have hieroglyphs where those borders would be but no triangular patterns. Again we are left with the same problem that like the corniced lid the triangular border patterns do not belong in the OK, but are found at least in some fashion in the MK and later.

The only thing remotely similar I can find is on the walls in the pyramid of Unas, though this pattern is used on what appear to be represented columns and not as a border:

It also should be noted that regardless of all this, though similar to OK sarcophagi found outside of pyramids (namely in mastabas), Menkaure's sarcophagus as depicted by Vyse is completely incongruous with the other sarcophagi found in pyramids of the OK. Meidum (not the pyramid, mastaba 17): Why would Menkaure's be so different before and after his time?

I believe the inconsistency of Vyse's drawings with known context of the period, as well as the fact no other OK pyramids contain sarcophagi with decoration, presents several possibilities:

1) Vyse's drawings are not accurate and he used poetic license to recreate the lid and add the border pattern from later examples. Interesting to note that he just "had" to remove it from G3 for fear of damage (unlike G1 or G2?) and sure enough it was lost at sea, never to be seen again.
2) The sarcophagus is not original to G3 and dates to the MK or later.
3) The lid is not original and it and the border pattern were added later.
4) G3 predates the 4th Dynasty and originally had no sarcophagus which was added later by the mastaba culture of which the corniced lid and triangular border pattern were added by the MK or later.
5) Menkaure's sarcophagus had features unique to the OK and were not seen again for another several hundred years.
6) (Pure unfounded speculation which I hate to even say) There was no sarcophagus in G3 and Vyse cobbled one together from various periods for his drawing.

Personally, I am of the mind the sarcophagi was originally identical to that found at Abu Roash with a lid akin to Meresankh III's. The triangular border pattern and possibly the detail on the lid was added later during the intrusive burial. I believe the sarcophagus was added later when the core structure was converted to a pyramid as only the outer chamber in G3 has the same palace facade design. If it were original to the core it seems unlikely this theme would not have continued to the main chamber or elsewhere in the core structure.

Regardless, Menkaure's sarcophagus as depicted by Vyse seems incongruous to the time. The question is why?

I have found an interesting sarcophagi at Giza dated to the 4th Dynasty (see post below):