Mysteries :  The Official GrahamHancock.com forums
For serious discussion of the controversies, approaches and enigmas surrounding the origins and development of the human species and of human civilization. (NB: for more ‘out there’ posts we point you in the direction of the ‘Paranormal & Supernatural’ Message Board).
Welcome! Log In• Register
Go to: Forum Home•Board•New Topic•Search
Re: Giza Pyramids: Order of Construction
Author: Thanos5150 ()
Date: June 16, 2015 04:22AM
Jon Ellison wrote:

> I have looked closely at your photographs of roman columns and
> I can't see any that are anything like the Mons Claudianus
> examples.
> The Roman columns all have radiused, ringed bases. Therefore
> not Roman.
> Not ignorance .. Observation .. Take another look at all of
> your photographs.

So I guess then you didn't read what I said about the ringed bases being cut off or look at the pictures of one that was cut off. So yes, you are "observant" to notice other columns do not have these "ringed bases" but too "ignorant" to ask yourself "why"? And when you do the logical answer is they were made by some lost civilization? Come on. These columns you can imagine take weeks if not months to quarry and shape-what if architectural plans change in that time as it is documented they did as well as in the Pantheon no less?

No doubt these were blanks and the ringed bases were meant to be trimmed later. As I pictured as well. You can see the little nub at the end of the shaft that sits on top of the pedestal. And ironically, the picture I showed, on purpose, is one of the granite columns of the Pantheon from Mons Claudianus: 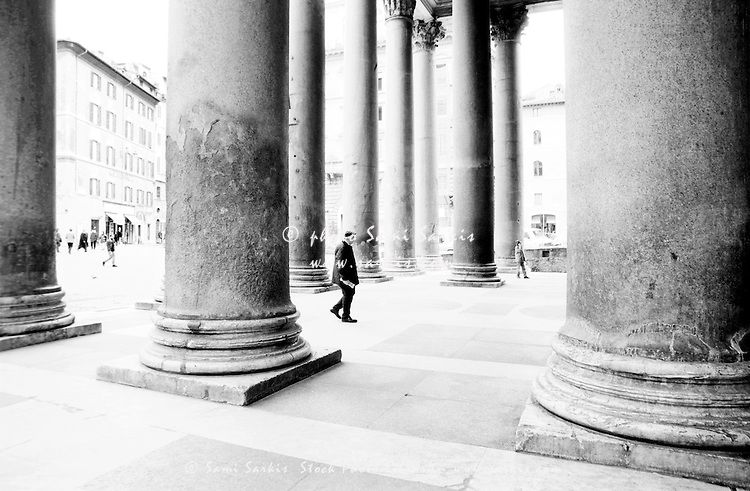 If all the columns at MC had ringed bases and that is how they were meant to be why does the ones they "repurposed" from there and "incorporated" in the Pantheon show exactly WTF I am talking about??? No different than the other pillars at Mons Porphyrites. If you don't get it at this point that's on you.

> Yes you are correct we identify and classify columns by their
> shape ...
> Base, shaft and capitol.

Thanks for the endorsement.

> I cannot find any roman columns anywhere that have shafts even
> resembling those examples at Mons Claudianus.

I just showed several. Some may slope inwards towards the top, an architectural effect known as entasis, but you are not going to do this at the quarry as you can't be 100% sure what the final plans will dictate which knowing this is paramount to entasis. If plans changed and the columns needed to be 2ft shorter it would look stupid, and the Greeks and Romans did not like stupid.

> I'll continue looking .
> You do likewise.
> When you find one let me know.