Mysteries :  The Official GrahamHancock.com forums
For serious discussion of the controversies, approaches and enigmas surrounding the origins and development of the human species and of human civilization. (NB: for more ‘out there’ posts we point you in the direction of the ‘Paranormal & Supernatural’ Message Board).
Welcome! Log In• Register
Go to: Forum Home•Board•New Topic•Search
Re: Further comments III
Author: Martin Stower ()
Date: May 27, 2014 07:12PM
Thanos5150 wrote:

Really? Perhaps I should start “cleaning up” my images — but then I know that “cleaning” presupposes a judgement on what is and what it not legitimately present and in that judgement the entire issue is judged.

Perhaps you could explain why we don’t see this “pen trail” (first horizontal line) in the second circle, if Vyse was so prone to it? Or, for that matter, in the empty circles on the page? 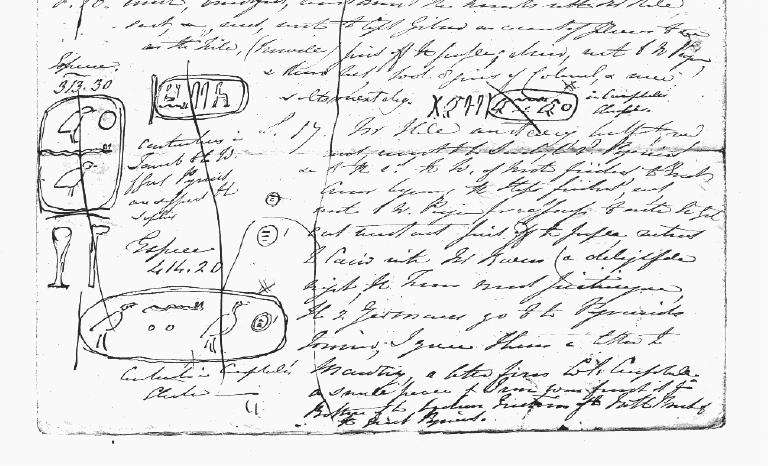 Only once do we see this “pen trail”. That suggests to me that Vyse was not prone to accidental “pen trails” in his circles at all — that where we see lines, he put them in deliberately.

I have to say also that the slant of his writing isn’t obviously suggestive of his having been left-handed.

> You can also see that the bottom "horizontal line" is connected to the
> center "dot"" by a pen trail and is not a separate line but rather an
> artifact of drawing the dot.

Actually, no, I can’t see that, certainly not clearly. I’m more inclined to see a pen trail here than I am in the case of the first horizontal line, but what I see is more suggestive of hesitancy than a dot. (He managed to dot his i’s and j’s with no obvious sign of difficulty.)

I see him drawing the circle, drawing the first horizontal line, starting on the second, realising that the circle really isn’t big enough and starting again below.

What I don’t see is anything which even begins to justify the hype about this being a “historic discovery” and “damning” evidence. Damning? I wouldn’t issue a caution on evidence this thin.

Don’t you find it even just a little bit odd that Creighton uses a drawing here, and not a photographic enlargement? Why? Do we need leading by the nose to not see what he doesn’t want us to see?

Consider some of the other relevant points: Creighton entirely overlooking (or ignoring) the caption “in Campbell’s Chamber” — and his failure to read (let alone understand the implications of) the dates on the page. The 16th of June is far too late in the proceedings for this to be any kind of “blueprint for forgery”.