Mysteries :  The Official GrahamHancock.com forums
For serious discussion of the controversies, approaches and enigmas surrounding the origins and development of the human species and of human civilization. (NB: for more ‘out there’ posts we point you in the direction of the ‘Paranormal & Supernatural’ Message Board).
Welcome! Log In• Register
Go to: Forum Home•Board•New Topic•Search
Re: Zep Tepi and the eye of horus
Author: cladking ()
Date: February 16, 2014 04:31AM
drew wrote:

> An interesting mixture of notions.

I believe this is all one single notion; ancient people were sensible and meant exactly what they said. It is our job to determine what the words have to mean in order that they ALL make perfect sense.

I believe I have done this.

> I forget where this was
> said, but it was said that a pharaoh could not claim the two
> crowns of upper and lower Egypt until they had been out to a
> specific spring in the Libyan dessert. I also forget where this
> spring is - I do not know if it currently has water there or
> not - but there are rock carvings showing testament to several
> pharaohs whom had visited the site over the ages. I am pretty
> sure Khufu was one of those.

This is Water Mountain to which you are referring and it contains the Cave of the Swimmers and evidence that Khufu himself was a visitor. New thinking is that they were ghere to gather mefat which is a complex iron oxide similar to red ochre. There is such a material here but it may have been mfk3t that we usually translate as "turquoise" that was actually the object of attention. I believe this may have been carried in the water or that Khufu believed it was because of its close association with red ochre and/ or siderite (another complex iron oxide apparently liberated from Egyptian red sandstone by the carbonated water).

Until recently it was believed that any water at "Water Mountain" was of the very dry variety. It was believed that the drawings of the swimmers at the cave had nothing at all to do with actual water. But recent evidence is turning up ample evidence that there was a significant community here supported by water that arose from the ground at Water Mountain.

Water is well attested everywhere in the desert but for some reason it is simply overlooked. People choose not to believe there was water or any inundation except high Nile despite the literal meaning of what the great pyramid builders actually said.

455c. after thou hast taken possession of the white crown in the water-springs, great and mighty, which are in the south of Libya,

Egyptologists have been dismissing what they said as superstitious gobbledty gook for so long they don't even notice they are doing it anymore.

They've been ignoring the extensive evidence for water for so long they don't even realize it's risen up to their noses. 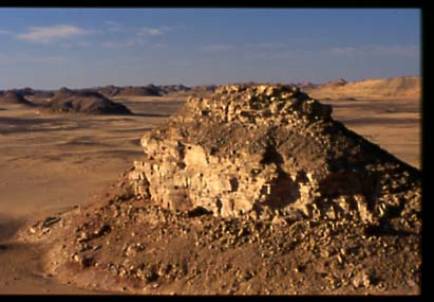 > If talk about water is a necessary ingredient, then this site
> might have something to do with it rather than the Nile in
> general. Accordingly, it is known that there were many springs
> which followed an inland route, providing relief for great
> journeys to far flung places. If the above spring is just one
> of a string of them, then a particular one might be something
> that marks an area of great importance.

There are still several oases and hot springs.

> We kind of know that peoples travelled to Egypt over a great
> length of time leading up to about 5,500 BCE, when
> archaeological evidence shows a composite culture emerged from
> various immigrants, as shown in the types of pottery, utensils,
> and the remnants of villages/housing that have been found. If
> we can accept that the African climate was really undergoing
> drastic changes from about 12,000 BCE onwards, turning a
> widespread greenscape into desert areas, and that the climate
> was settling down between 7,000 BCE and 5,000 BCE, then we must
> surely accept the earlier folks descending into other lands
> originated from somewhere. If journeys back to their origins
> occurred now and then, then it would surely include springs for
> such life saving waters.
>
> In considering how powerful Sekhmet was, her bloodlust and
> near-success in destroying mankind might be a little more
> persuasive in being joined to the climate change of 12,000 BCE.
> I am not sure if volcanoes were involved but Africa certainly
> has them; and we do know the association to a comet or asteroid
> striking North America at that time, so Sekhmet might be an
> association there.

I'm inclined to believe most of our understanding of Sekhmwet is wholly anachronistic. The pyramid builders believed that sekhmet was the natural phenomenon of the weight of water and that this feminine phenomenon required seven vectors (arrows) to compute the magnitude of this power. The story of the blood lust was invented long after the ancient beliefs were lost.

There weren't many ancient beliefs but chief among them was that reality was axiomatic and that time was what it appeared to be. Time was the primary component of cause and effect and it was such simple concepts and a metaphysical language which made the pyramids possible.

It does appear there was a composite culture and most of it came from the west as the Sahara dried. People arwe going to be surprised by the results of science if any ever gets applied to the pyramids and ancient Egypt. We completely misunderstand the origins of civilization, the meaning of science, and even what it means to be human.