Mysteries :  The Official GrahamHancock.com forums
For serious discussion of the controversies, approaches and enigmas surrounding the origins and development of the human species and of human civilization. (NB: for more ‘out there’ posts we point you in the direction of the ‘Paranormal & Supernatural’ Message Board).
Welcome! Log In• Register
Go to: Forum Home•Board•New Topic•Search
Re: Horus' sky arcs and their nature.
Author: cladking ()
Date: May 01, 2016 05:14PM
This new understanding of the rainbow and its "shadow" are opening up several new lines and casting already solved lines in a new light. It is also providing more context and the ancient language was highly context dependent. My initial belief was finding that osiris' shadow was above him would solve only a single line but the effects are snowballing.

Revisiting utterance #570 with this new understanding brings forth quite a lot of new meaning. I know people don't like long stretches of utterances so I'm going to delete a lot of it so it's easier to follow.

Shu takes the water up and tefnut brings the spray down.

The rainbow and the new god (N) rise.

Khepri (mid day sun), nun (water), and atum (spraying water) accept the dead king as one of their own (a force of nature).

The rainbow disappears at noon when khepri comes to rule the sky. He drives away the rainbow (garment), and perhaps, the darkness (the shadow above the rainbow.

The dead king not only is remembered by being assigned a specific star as a mnemonic but he is the stars or spirits (CO2) which causes the water to fly to heaven. These bubbles and droplettes in the air scatter the light of the sun into the rainbow and osiris' shadow above.

1459a. N. seizes the white crown; that upon which is the wire of the green crown.

The dead king as the water wears the crown on top which contains the rainbow. The green crown contains the white crown of water and is operated by the wire. This is simply a reference to the upper eye of horus in the mehet weret cow. 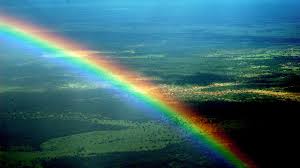 The dead king appears in the morning on the eastern side of "heaven" as does the sun.

This is very much the rainbow utterance. It was read to the crowds before noon at the ascension ceremony.