Mysteries :  The Official GrahamHancock.com forums
For serious discussion of the controversies, approaches and enigmas surrounding the origins and development of the human species and of human civilization. (NB: for more ‘out there’ posts we point you in the direction of the ‘Paranormal & Supernatural’ Message Board).
Welcome! Log In• Register
Go to: Forum Home•Board•New Topic•Search
The Ancient Egyptian Pyramid Texts revisited
Author: william gleeson ()
Date: July 17, 2020 04:38AM
The Pyramid Texts are perceived to be a collection of weird quasi-religious or magic spells aimed to ease the journey of the departed into the afterlife … but that is all a gross misunderstanding. A plain English summary tells a very different story.

The host Old Kingdom pyramids at Saqqara date to ca 2300 BCE, but evidence suggests that the garbled Texts were added much later in the Middle Kingdom by bumbling copyists … then doubly distorted by modern-era mistranslations. There are 759 ‘Utterances’; a few are missing, several are fragmentary, many are highly repetitious, and most of the rest are incomprehensible. The standard translations are couched in a 18th century Biblical religious personalised language (thee, thou, thine) … whether that is appropriate to the original or not. The hieroglyphic text contains many errors with words missing or mis-spelled, along with obvious grammatical mistakes … altogether indicating that the work is not original but has been transposed later by credulous copyists. Faulkner’s highly regarded 1969 translation is peppered with words and phrases that he footnotes as untranslatable, unknown, doubtful, speculative, a pure guess. At Utt. 318 he footnotes … ‘It is obvious that the ancient copyists themselves did not understand (this Utterance), and in attempting to edit it they have made it even more incomprehensible.’ 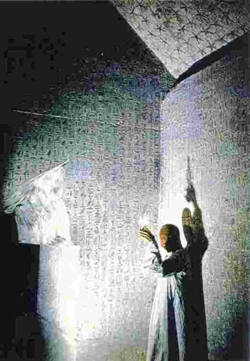 All that said, with the help of complementary sources, it is possible to discern a disjointed thread, which falls into four sections … preparation of ‘the body’; provision of ‘food’; transfer to the upper chamber; and final resurrection and ascension. The locale is within the passages and chambers of the Great Pyramid – preparation and feeding in the lower Queen’s chamber; transfer up the Grand Gallery ‘Stairway’; and ascension from the King’s chamber. The main characters of the story include –
Ra (Re, Atum) – the primary sun-god, the personified sun.
Osiris – the imaginary, personified son of the sun, manifested on Earth
Horus – a later [imaginary] derivative of Osiris
Thoth and Isis – real human ‘lords’, managers of the process.

A literal, impersonal interpretation, stripped of the religious embroidery, tells a very different story … summarized below. The language is quoted or paraphrased from Faulkner, 1969 (1), with numbers in parenthesis indicating the source Utterance(s).

Summary
Thoth and Isis manage the preparation of the ‘dead body’ [of Osiris] in the stone coffer; they give it food and drink which provides the ‘efflux’ power of the eye ; they transfer the filled coffer up the stairway to the upper chamber; where it ascends ‘by magic’ in a glorious blaze of sunlight. 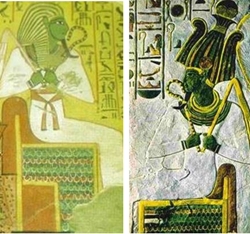 [/img]
The imaginary personification of Osiris, seated on his iron throne, in the ‘cooking pot’.

Conclusion: the inert body [of Osiris] was a stone coffer filled with lapis lazuli spheres [eyes]; it was fed 2-3-5 meals of Tht-wtt food of ‘efflux’; which gave it power to transform into awesome, dreadful light.