Mysteries :  The Official GrahamHancock.com forums
For serious discussion of the controversies, approaches and enigmas surrounding the origins and development of the human species and of human civilization. (NB: for more ‘out there’ posts we point you in the direction of the ‘Paranormal & Supernatural’ Message Board).
Welcome! Log In• Register
Go to: Forum Home•Board•New Topic•Search
Re: The Implications of Approximating Phi
Author: thinkitover ()
Date: July 27, 2020 10:10PM
Mercurial Wrote:
-------------------------------------------------------
> Well there are definitely lots of things to think
> about! Are approximations of Phi derived from
> ancient buildings and monuments signs of
> inaccurate measurements, or signs of ancient
> incompetence, or attempts to unify various
> astronomical or geometrical considerations into a
> system?

I'm sure I'd want to say the third option. Fitting all of those into a single system does seem to involve a few compromises.

> Some of the Phi approximations you have here are
> ingenious.

Thanks! I still wonder sometimes if the Great Pyramid was built slightly irregular so that it could express more than one of those approximations, but I'm still not really sure which would be the most important beyond 1.618829140 and 1.622311470. It's amazing but (4 / Pi)^2 = 1.621138938 just doesn't seem to show that much usefulness, to the best of my knowledge. At that rate it may soon be overtaken by some of the weird ones like "Rio Bec Phi".

> Funnily enough, in
> his talk on YouTube, Neal mentions
> that maybe Pi should be seen as the really
> important ratio in the human body - in relation to
> Vitruvian man (he enigmatically says he could talk
> about Da Vinci's drawing all day but doesn't have
> time, and moves on). "I believe man is designed to
> the pi ratio not the Phi ratio" (see 55 mins in),
> talking about the centre of the body: "it's not
> 55:89 which is what it would be if it were the Phi
> ratio, it is in fact 56:88" (88/56 x 2 being
> 3.142857)
> (Neal also says of Da Vinci and his friend that
> "they were seeking the mensura perpetua,
> that's the basic unit that governed all others,
> they knew it existed, which strangely turned out
> to be the English Foot")

> By the way, the layout of the three pyramids at
> Giza, as drawn by Jiri (and Chris Tedder), with
> the golden rectangles, showed a Phi ratio close to
> 55/89, or roughly 1.6179, if you remember, though
> when I used Flinders Petrie's figures, I hope
> correctly, I got slightly different ratios again.
> (figures in metres because I was comparing with
> Glen Dash, etc) These ratios aren't quite as close
> to Phi.
> 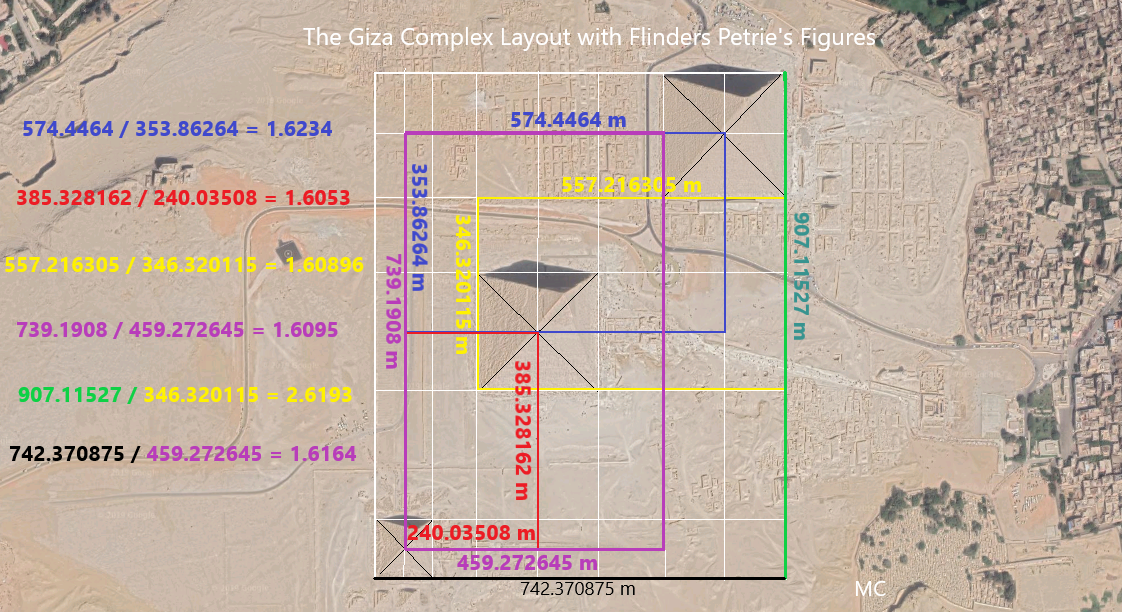 One of these days I have to get back to that. It's still a rather daunting task actually, there's a lot to coordinate there.

So far that hasn't found its way into my metrological tables (although I do get frequent hints there are unit value still missing - is Neal going to be basically right after all about ten versions of each unit? - but 1067.077719 is what I have for the diagonal of the Great Pyramid in Munck's model.

If they skewed it slightly they might have gotten 1067.438159 across the other diagonal but it seems a bit hard to be sure about something like that without a better consensus on which side of the Great Pyramid is longest or shortest.

> More magic. And as for the connections between
> Tikal, Giza, and the rest, they are astounding.
> You could perhaps add to that the 364 day year
> system for lunar eclipses that seems to be in the
> calendar at Stonehenge and, judging by the number
> of steps, at Chichen Itza - 13 x 28.

I haven't gotten that far with approximating 364 yet. I suppose it's a fact of life with 364 + 1 (platform) steps at Chichen Itza and 819 / 225 = 3.64, but so far I've poured a lot more work into trying to figure out how 365.25 would have been represented. There are several possibilities with ~Venus Orbital Period x ~Phi, though.

Not sure about that as I have seen figures closer to 364. That might be where more "exotic" versions of Phi like "Rio Bec Phi" might find a role?

It's a curious thing about the matrix of equations I'm using for the calendars that 225 is the absolute max for the VOP unless they actually went as high as 19000 or more in approximating 18980, but there probably wasn't much need to resort to that?

Anyway, thanks again. Hopefully more of this will get figured out soon.