> Not speaking at you, thou through you...
>
> The reason I don't believe in ramps, as the math
> doesn't add up. I can't read Egyptian. I look at
> it purely as an engineering issue.
>
> I find the bulk of individuals who contend ramps
> as the solution, cannot even do math, as they
> never attempt to qualify those ramp theories. Why
> is that?
>
> I dare anyone up here on GH, to show us, how wide
> those ramps would need to be, the grade, and how
> many men would occupy that space, pulling stones
> nearly 1 mile uphill. Remember, they can't stop
> and rest...
>
> Here is the math condition to meet. 1 stone every
> 3 minutes within 20 years, and/or 30 years, what
> ever. How many teams of men, their number per
> team, their width and length, and their speed of
> travel.
>
> Try that on for size, and show me how it works. I
> doubt very much anyone will take me up on my
> offer. Why? Because they can't or will not do the
> math. It's just easier to believe in the herd
> mentality. It's safer, and causes less stress...

You might as well give up. Virtually every single ramp theory has never been thoughtr out because "ramps" are a belief and believers never need to think things through. Every line of thought comes back to "they mustta made ramps work somehow because the pyramid exists". EVERY belief is exactly the same and everything we see and do reflects those beliefs we chose initially.

If you challenge one of the nonsensical ramp designs the words will reflect their beliefs because they are not thought out. The words will twist and turn more than any ramp ever could asnd will begin to describe an Escher print at some point; 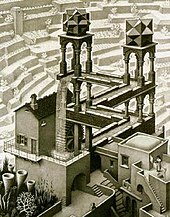 it's a shame Escher never drew any pyramid ramps since no one else could do them justice. Some of the ramp proposals stranded 100's of millions of Egyptians at the top because they provide no means for the men to get back down. It simply doesn't matter to believers that there is no physical evidence for ramps and there is a simpler, easier, and far more efficient means that is very well evidenced. It just doesn't matter that the evidence and the entire cultural context shows stones were pulled straight up the sides of five step pyramids one step at a time. Who needs facts when belief describes exactly what we each want to see? I want to see rational humans and Egyptologists want to see superstition that has given way to modern omniscience. We ALL put the cart before the horse but at no time has it been more obvious than it is with the outmoded, outdated, and obsolete notion that ancient people could only have dragged stones up ramps.