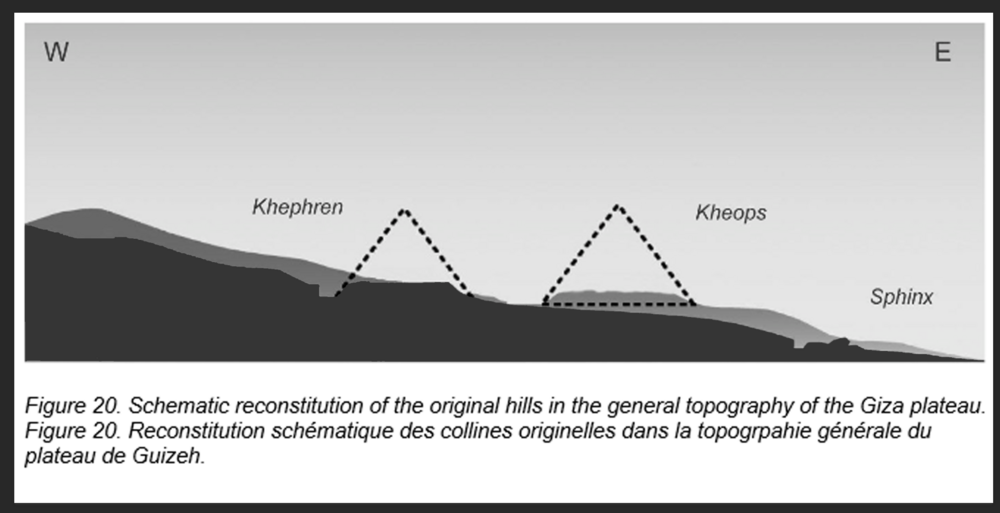 >
> This was a survey estimating the lay of the land
> underneath the 2 Pyramids, which would reduce the
> amount of stones asserted.

There's no evidence of a massive hill under G1 or G2. If there were a hill it would have almost no effect whatsoever on the total amount of lifting to construct the pyramid. This for TWO REASONS;

2.,= Any hill UNDER the pyramid means stones had to be pulled UPHILL to even get to the pyramid. Every stone had to be lifted even higher because the pyramids weren't built at the bottom of a hill.

This talk of pyramid shaped mountains under the pyramids is an obfuscation used by ramp believers and has no material effect on how the pyramids were or might have been built.

> In G1, they also drilled through the wall leading
> to the Queen's chamber, and found it was back
> filled with sand. Sand being more abundant, which
> requires no chiseling, would be a natural option.

This sand was foreign to Egypt. It is believed to have been brought in from the Sinai but there are other possibilities. It should be noted that a major "contaminant" of this sand is vaterite which is an unstable compound associated with hot springs, geysers, and the like. It is so unstable that when moistened it turns into a calcium carbonate compound.

It is illogical to believe that sand was imported to a desert to use at altitude for mere fill. It never happened this way and Egyptology chooses to ignore the data. At best they'll suggest the sand was used as an abrasive to cut stone but performing such cuts at altitude makes no sense.

It ALSO MAKES NO SENSE TO USE FILL. If it were easier to lift little material like sand and debris than to lift 2 1/2 tonm stones then why is the pyramid OBVIOUSLY composed of 2 1/2 ton stones?

It was HARDER to lift fill so it's a safe bet they did not. Any fill in between the stones was just debris from final shaping and broken stones. It was easier to destroy a stone that was defective and put it between placed stones for additional support than to move it to some place it could be used. Remember too the whole working top of EVERY step was crisscrossed with paths for stones, men, and materiel. This means the voids had to be completely filled in these lines.

> I encourage you to pursue a workable analysis,
> scenario. At some point, you will need to justify
> your proposal using math. Math, which is in
> keeping with the evidence of men's dwellings, food
> processing, and other supportive functions.

This is the problem, anyone can pencil whip any proposal into seeming plausibility. When challenged ramps proposals just morph like an Escher print and the builders are given superhuman strength through increasing superstition. It simply isn't necessary to explain a lack of evidence when it is ASSUMED there is no evidence and no surviving infrastructure that mustta been hauled off. So evidentiary and mathematical objections are pencil whipped into submission.

And most people can only see support for their beliefs. This is why they dream up ideas like stones at the top are little and there's a mountain underneath.

> The only method I could fine, which meet
> the many conditions required, was a Funicular
> operation. Water, vessel, and an Incline Plain,
> will move rocks to a higher level, provided the
> water is already at a higher level. I keep
> refining the proposal, though what continues to
> encourage me, is the parts assemble themselves so
> well.  Everything continues to fall into place.

There was water so why wouldn't they use it? It's source is important but Egyptologists won't look for it or perform the basic measurements of the pyramid. Until someone is allowed to employ actual science to find the source all we have is speculation.

> Try that with ramps, and see what happens. How
> many people and years have they spent at this,
> only to fail.

They aren't even trying.

They already assumed it was ramps and once you believe in tombs, changelessness, and superstition it no longer matters how they were built.

It just doesn't matter so long as the people were superstitious and did what they were told.