There's no certainty what it was used for. The obvious answer would seem to be that it was for mooring a boat but "obvious" gets people in trouble.

Herodotus appears to have said they took 30 years. Ten years to prepare the site and build the equipment while stockpiling tura stone as said equipment and 20 years lifting stones. The first twelve or thirteen years may have been the most human labor intensive part of the entire project if they used water to move and lift stone.

This does not seem unrealistic.

But don't forget they also had to move casing stones every day. Plus they needed copious supplies, men, and materiel to get to the building site.

> Also assuming, that more time had to be
> used for the huge granite blocks for the King's
> chamber...

This is atiny part of the entire project and is virtually irrelevant for this reason. Of course it took more time and effort to lift larger stones but the fact is they were obviously good at lifting heavy stones AND a large stone has far more volume than tiny ones. If they made the whole thing of huge stones they wouldn't have needed 500/ day.

They were best and fastest (most efficient) at moving 1 1/2 to 8 ton stones which is why most are this size.

> and for the more difficult upper part of
> the pyramid, where work went slower than in the
> lower parts.

This is irrelevant because it's included in the definition of "pyramid". The top of the pyramid is necessarily at a greater elevation than the bottom so more work is required per unit volume.

> There probably were also other
> factors delaying the building of the pyramid such
> as the weather or a temporary shortage of certain
> building materials.

No matter what means were used the weather wouldn't always cooperate. But there were men tasked with assuring an ample supply of every commodity and raw material. Until very modern times every industry maintained extensive supplies of such and some supply of product. Now the government doesn't allow it and we have JIT-delivery instead.

OK, well that is Franz Lohners calculations. He took into account days off. In saying that, he is not infallible. As much as I like the fact that Franz, provided math, while most do not, he also can't see the forest for the tress. No matter what I propose, others will improve and find the faults in my designs as well. It just how things work.

It's just a Ballpark estimate...  In studying his proposal, I saw an issue. Open this link.

His estimates are for 1 stone, and he is lifting 2 stones. Using his (Average size of the stone blocks was 127 x 127 x 71cm).I am able to back engineer his drawing, based on his representation. 2 stones would require 100 men., as his men calculation is based on 1 stone, 48-50 men.  Plus, I work in 3D, and to size. His problem is, his men reach the bottom of the Pyramid, and at that point, they would no longer be in position to use their downward (gravity) weight. This happens at 100 feet up the face of the Pyramid. His picture does not show you those men, and I do. They consume 2 steps each, 25 inline, with 4 line in total. The Blue represents the space the men would consume, while the Yellow represents the length of his additional operation.

Do you see his problem? 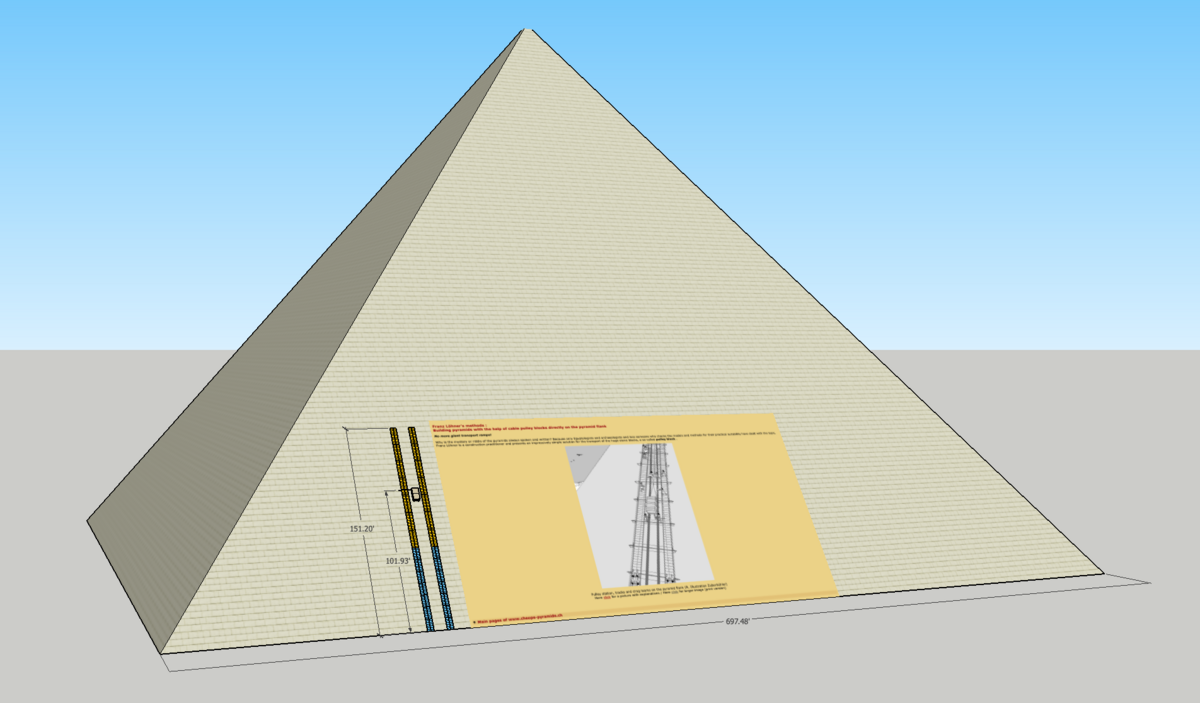 Not to mention, you have to climb up to come back down. How many times a day do they do that? 1-2 stones per minute?