Mysteries :  The Official GrahamHancock.com forums
For serious discussion of the controversies, approaches and enigmas surrounding the origins and development of the human species and of human civilization. (NB: for more ‘out there’ posts we point you in the direction of the ‘Paranormal & Supernatural’ Message Board).
Welcome! Log In• Register
Go to: Forum Home•Board•New Topic•Search
Re: Water for the Giza Complex
Author: Steve Clayton ()
Date: March 23, 2020 11:09PM
>I certainly won't be bored by the math and look forward to seeing it. But the size of the boat (in ft ^ 3) is merely the cubed root of the load divided by 64. I believe it was shaped like a grasshopper. The calculations are a little harder to model if the angles are different such as if they used G1a-c to lift stones on the causeway since the angle no longer cancels out and you have to use the sines or (sekeds) to compare the forces. This same applies to the cliff face that was apparently used. As a rule a great deal of the tweaking of any such system is done in practice rather than on paper or papyrus. No matter how careful your calculations or how fine your knowledge there are going to be peculiarities in the real world. Even slight differences in the angles or small temperature and humidity fluctuations can make large differences in terminal velocity or requisite loading. Even if you could get these "perfect" (with modern materials you almost could) operators will not operate them exactly according to spec. Some will prefer stable operation and some more robust. So it becomes necessary to have systems in place to control each aspect of the movements and most especially a pretty good braking system. Undershooting would cause large delays and overshooting can cause massive equipment damage and injury.

"Ropes" are interesting. Ultimately they did nothing but transmit forces but, of course, building and operating them required a great deal of expertise and learning. I believe the largest diameter ancient rope known was about 4 1/2 inches but this would be insufficient for most of my designs. Building heavier ropes would have been >easy enough. This would be sufficient for your proposals but you need more capacity to to move all the stones to get the job done in 30 years.

Yes, they would of needed 4 or more, lifting areas. Possibly one on each side. What ever it took. You have multiple access points. The Causeway on the other hand, is only 1 path up, which constrains the amount of stones. Barges in Tandem was the solution.

I have prepared my numbers and the references. It is allot. My concern is delivering it all at once, will cause everyones eyes to gloss over. Snooze time... 4 1/2 " is a very large rope. My multiplying small sizes into a group, would be potentially easier to manage. Certainly a 30 year build would help. Thou, I will digress to Franz's calculations.

Before I begin, I need to establish some constants.

1. The picture of Egyptian Rope Making, has two interesting shapes. The first is a rope sling. The second, ??? the possibility of a barge with stones? It could a number of other things. A plate with items on it... The Sling is pretty clear as to what it is. A wooden dowel through the loops, would serve to connect them, and easily disconnect them.

2. These are Franz Lohner's calculations.

For our calculations we assume 500 stones a day. This is a rough estimate, assuming a 8-hour day, during 290 days a year, with 20 years to build the pyramid. Also assuming, that more time had to be used for the huge granite blocks for the King's chamber and for the more difficult upper part of the pyramid, where work went slower than in the lower parts. There probably were also other factors delaying the building of the pyramid such as the weather or a temporary shortage of certain building materials.

So, I will be working with 500 stones per day. Franz's estimates are for G1. I usually work on G2, as it was the last, and best preserved Pyramid on the Giza Plateau. It contains less stones than G1. 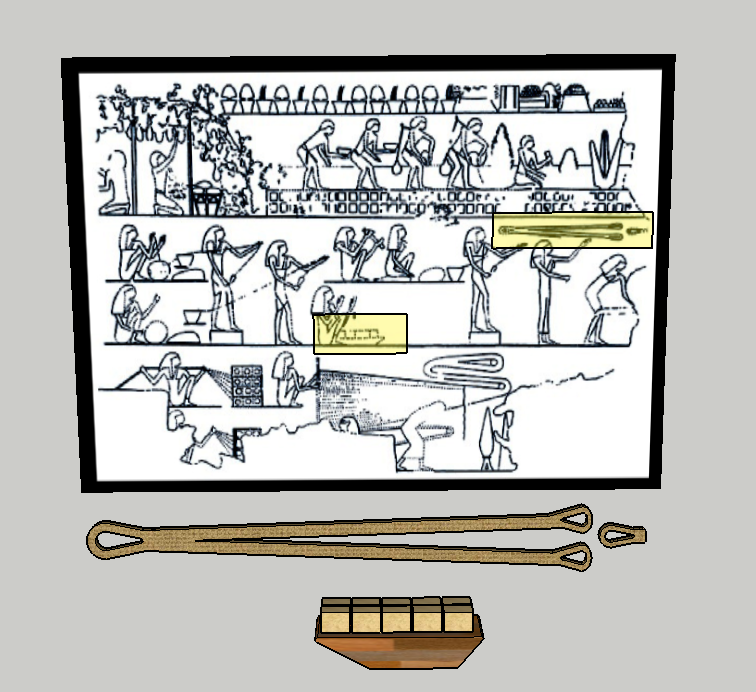 OK, I will start updating the post in blocks, so as to keep it as simple as possible. The fist section will be the Links for Conversions, Rope specifications with (MBL) minimum breakage loads per size, and an Incline Plain with Friction Calculator.