Just as you believe everything in the PT is from the afterlife it's entirely possible that this applies to later works as well. You presented no evidence Ani is drinking water from the Nile or the Nile in the Elysium Fields.

Meanwhile there is abundant evidence that there was water on the Giza Plateau. In addition to the many pieces of evidence I've already cited in this very thread that has been ignored there is also a canal leading away from the G2 "Mortuary Temple". There is a huge fissure just north of G1. The workers village was destroyed by flooding several times despite being behind a large wall. There is water erosion in the Sphinx area and the simple fact that the bottom of the moat surrounding the Sphinx was just a little below the level of "High Nile". Remember that "High Nile" was used to describe the flood in the Pyramid Texts.

Even all of the geology supports a wetter place in the past. The grotto is built on a geological formation that required water to form. The descending passage incorporates a natural cave. There is a "well" of unknown purpose in the bottom of the pyramid and an obvious drain right in G1c. 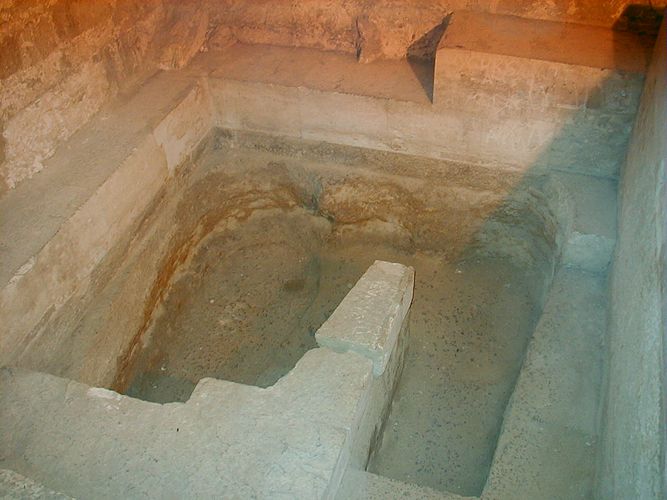 Just as nobody can see the other startling evidence for water already posted in this thread they won't see any of this either. They won't consider that the thousands of references to "water" in the PYRAMID Texts might have any bearing on the pyramids. They choose to believe the numbers on the Palermo Stone refer to "High Nile" rather than the real "inundation" that tossed at Giza. And all this DESPITE the literal meaning of what the pyramid builders actually said. Ya' makes ya' bed in you lay in it. Egyptology has made a crooked bed out of ramps and and assumptions and now they have to sleep on them just as surely as the ancient builders laid in them.

My evidence is ALL concurrent with ancient times while Egyptology's evidence is ALL from later eras and even today. Today these ruins are in a desert but the very fact that trees still exist in the area with very deep roots shows the area has not always been a desolate ruins. It was once a green and lush oasis where pyramids were built by pulling stones straight up the sides.