Mysteries :  The Official GrahamHancock.com forums
For serious discussion of the controversies, approaches and enigmas surrounding the origins and development of the human species and of human civilization. (NB: for more ‘out there’ posts we point you in the direction of the ‘Paranormal & Supernatural’ Message Board).
Welcome! Log In• Register
Go to: Forum Home•Board•New Topic•Search
Rollers and Rope
Author: Steve Clayton ()
Date: March 04, 2020 04:41PM
>no matter how you spin it, the process of getting block from the quarry to the body of the Pyramid could NOT have been achieved without employing some degree ( :D ) of >inclined plane, indeed any number of same....with the manpower and technology we know them to have had.

I agree they had tools and methods which lessened their workload. I wanted to reduce these (tools and methods) down to their rudimentary likelihood. This is born out of watching Hollywood portray ramps, ramps, ramps. Every time someone (Nova and others) attempted to use rollers underneath the blocks, they were only able to travel a short distance, before the roller became crooked and dislodged, and/or ground unusable . Rollers are tools, thou unless you place them into another piece of wood to help hold them in place, with a half round cavity, they fail to be of much use. Often they will independently roll in opposing angles, causing issues.

Now that we solved the roller issues, and they stay in place, things work better, as you just invented the pulley. A rudimentary pulley considered by some, thou a pulley just the same? No axle? I think they realized early on that reducing friction was advantageous. They even built rock roads from the desert quarries, to aid in friction reduction.

There are incline plain / friction calculators on the Internet, as well as,  figures for different rope stress capabilities. I use to post a video on Incline Plains (Simple Machines), as well as, how easy it is to accidentally discover, how rigging your ropes would result in 50% reduction of force / men needed. If you simply run your rope down to you sled, around and out again , returning to the top, you just lessened your load by 50%.  Put these two items working together, ie. using the center of the rope to attach your pulley sled, and you have just made it twice as easy and fast in building a pyramid. 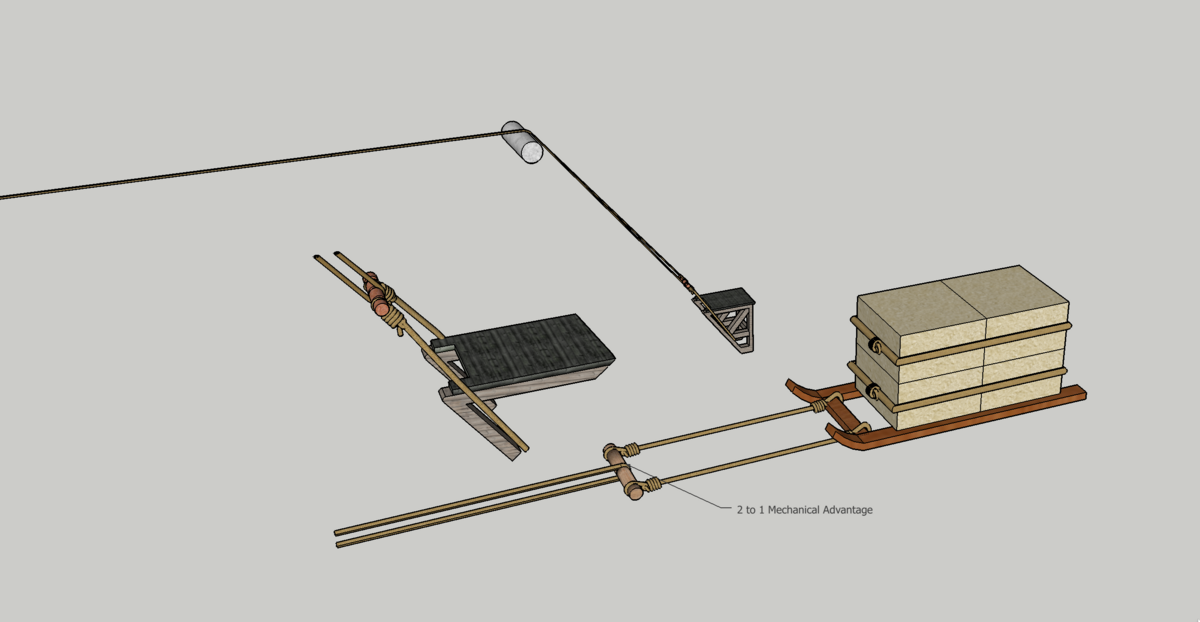