Mysteries :  The Official GrahamHancock.com forums
For serious discussion of the controversies, approaches and enigmas surrounding the origins and development of the human species and of human civilization. (NB: for more ‘out there’ posts we point you in the direction of the ‘Paranormal & Supernatural’ Message Board).
Welcome! Log In• Register
Go to: Forum Home•Board•New Topic•Search
On the offerings
Author: engbren ()
Date: May 16, 2020 11:21AM
I have been thinking about the offerings that Khufu provides to the former Pharoahs that feature in the stories of the Westcar Papyrus. In the examples we have available to analyse, the offering is always the same for Pharoah Djoser, Nebka and Sneferu:

Given the repetition of these numbers in the stories and the fact that repetition builds in redundancy into the stories, I think this sequence is of importance beyond a mere list of items to provision an alter. In Lull and Belmonte, Table 6.1, there is identified a constellation known as the Pair of Stars "sb3wy" which is identified to Castor and Pollux, the bright stars of Gemini. The pair of stars is represented in hieroglyphics simply as two stars - a symbol that in the later Demotic Script is thought to be connected to the number 60 and the symbol for degrees (refer to Ossendrijver and Winkler). I suggest the 2 balls of incense in this instance are representative of the pair of stars constellation.

The Ox, as I have written about here, is written in singular jw3 without a feminine ending and as such represents a single male ox or bull. In Egyptian astronomy, the bull can represent:
1. Meskhetiu, the modern day Ursa Major as I have identified the bull in the story of Djedi to;
2. Taurus as represented in the Zodiac of Dendera; or
3. Saturn which according to Quack was known as "Horus bull of the sky".

While not discounting other options, Saturn becomes an interesting prospect - Saturn cycles through the houses of the zodiac approximately every 29 years and thus provides a cyclical marker. Curiously, on the dates that I have proposed, Saturn is housed by Gemini, so the Ox is near the Pair of Incense balls. This housing spans from -2797-06-18 to -2799-05-23 as simulated in Stellarium or 2798 BCE to 2800 BCE in Sky Safari Plus.

Another curious point here - the bread, beer and ox each have a common element. The Egyptians made their beer by fermenting their bread and, according to Erman, fattened their Oxen by feeding them bread dough. The Goddess Nut (nwt) is represented in hieroglyphs with a X1 loaf of bread and a jar, similar to the jar of beer. Nut is of course linked to the Milky Way. If we put this together, on the date in question, modelled in Stellarium, we see Saturn in Gemini with the cloudy Milky Way cutting a line very nearby: 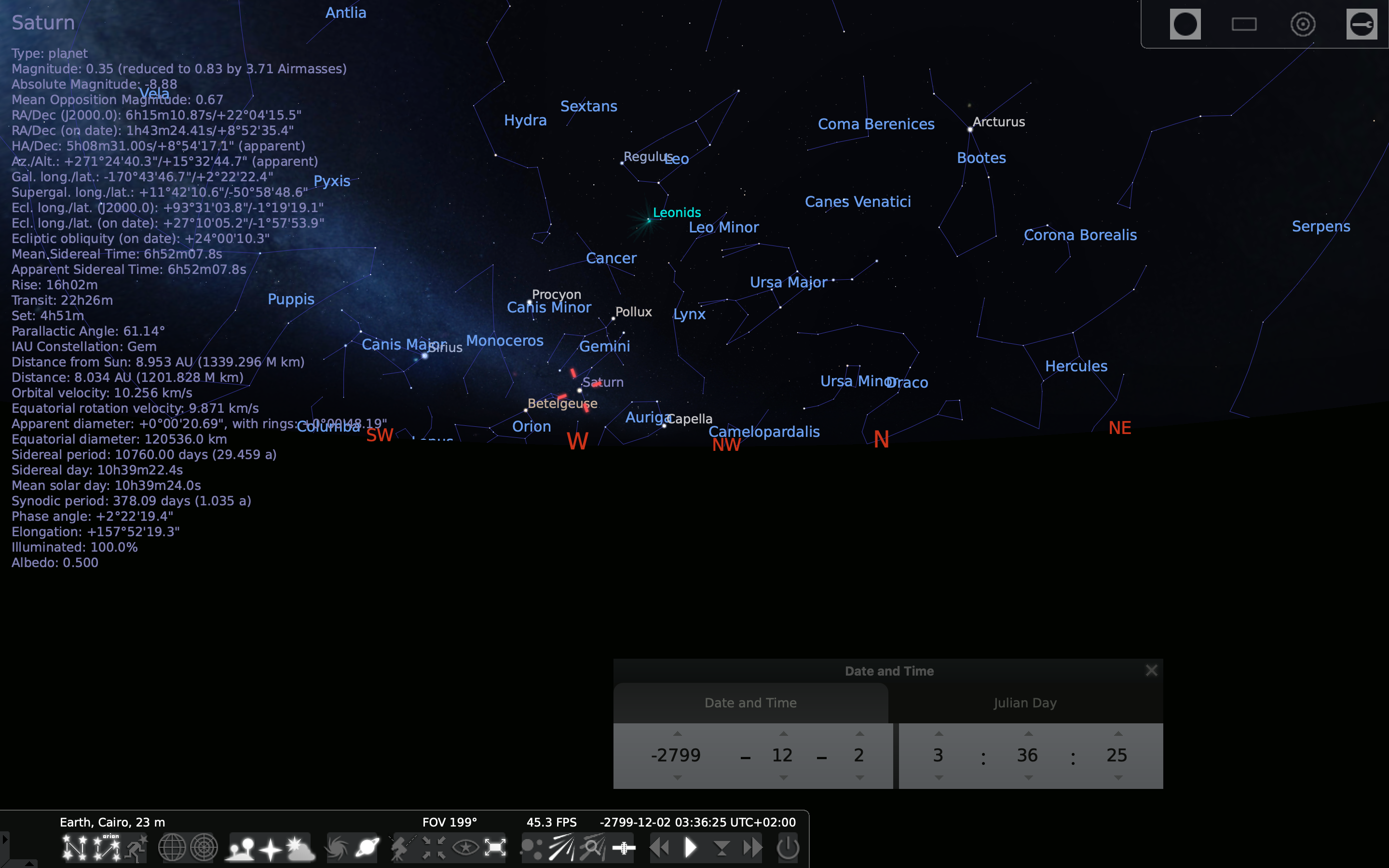