Mysteries :  The Official GrahamHancock.com forums
For serious discussion of the controversies, approaches and enigmas surrounding the origins and development of the human species and of human civilization. (NB: for more ‘out there’ posts we point you in the direction of the ‘Paranormal & Supernatural’ Message Board).
Welcome! Log In• Register
Go to: Forum Home•Board•New Topic•Search
Re: The house of Reusre
Author: engbren ()
Date: February 14, 2020 10:49AM

Quote
Nederhof - Westcar Papyrus
One of those days, Ruddjedet was suffering while her labour was difficult. Then the majesty of Re, lord of Sakhbu, said to Isis, Nephthys, Meskhenet, Heqet and Khnum ‘Oh may you go and deliver Ruddjedet of the three children who are in her womb, who will perform this magisterial office in this entire land for they will build your temples, provision your altars, make your libation vessels abundant, and increase your divine offerings.’
Then these gods proceeded, after they had changed their appearance into that of musicians,and Khnum was with them carrying luggage. Then they arrived at the house of Reusre, and found him satdning with his kilt upside down. Then they presented him with their menitis and sistra.


This passage describes the arrival of the gods and goddesses that Re commands into the "house of Reusre" per my prior post, I take it that this means that they have slipped below the horizon in the West. I haven't identified which stars represent Isis, Nepthys, Meskhenet, or Heqet at this point in time. However, Khnum should be identifiable to Capricornus based on Table 6.1 in Lull and Belmonte. Note the luggage of Mercury and Venus. 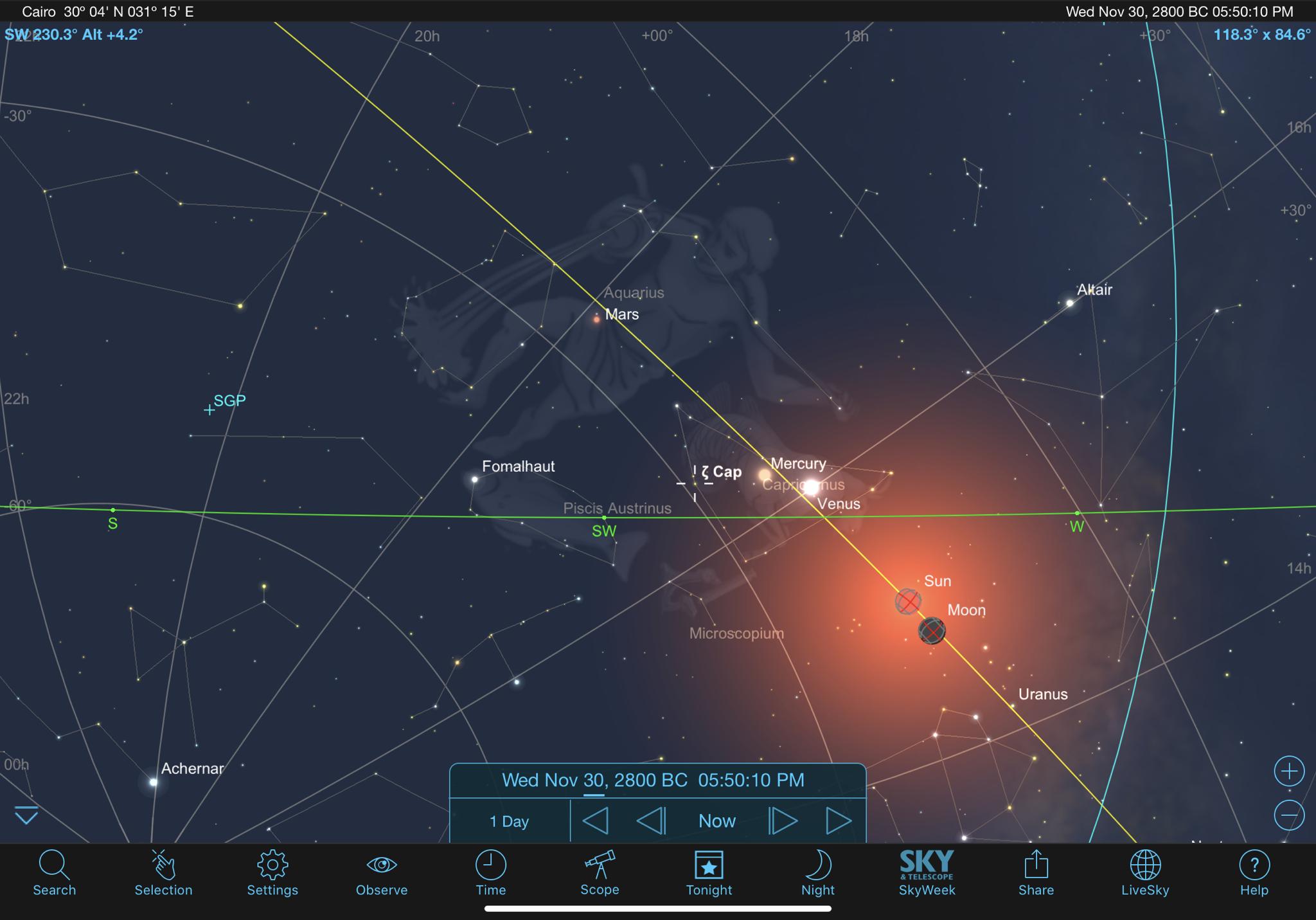 He then said to them: ‘My ladies, look, there is a woman who is suffering, for her labour is difficult.’
Then they said: ‘Let us see her, for we are knowledgeable about childbirth.’
And he said to them: 'Come in!'
Then they entered, towards Ruddjedet,
and they locked the room with her and them in it.


As the sun passes under the horizon, at this time of year, it is locked into Sagittarius.

Quote
Myself
User is a name for Osiris as established above in the discussion on Reusre. Osiris is also connected to the concept of power and of re-birth. As such, I suggest that Userref is a re-birthing of Osiris.
Supporting this notion, Budge in discussing the Tuat on p179 “As the sun passed though the Tuat large numbers of souls made their way into his boat, and although it was only the dead sun that was their guide and protector, and his passage was through the realms of the dead which were under the sovereignty of Osiris, the god of the dead, they were brought forth at length to renewed life and light as soon as the boat passed out from the eastern end of the Tuat into the day.”. Budge further expands upon this by discussing the Tuat [pp 259-260] from the perspective of the cult of Osiris and identifies that there “lies a mummified form, representing Osiris, and called Sem-Ȧf, i.e., the “Image (or Form) of “Ȧf”” Further “As Ȧf, the dead body of Ra, passes into our world, his new life begins, and for men and women the night passes away, and a new day is born.” I argue therefore that Userref is in fact Osiris in the form of Ȧf and represents the rising sun in the morning.

There are multiple sources citing Geraldine Pinch (unfortunately I don't have a source copy to cross-reference), where Pinch argues the hippopotamus goddess could be thought of as giving birth to the creator Sun god. In the secret crypts of the Temple of Ipet at Karnak, the hippopotamus goddess was said to give birth to the solar form of Osiris who rose again as Amun-Ra. In the Pyramid texts, the reborn king is nourished by the sweet milk of Ipy; Ipet


We are also told that Isis places herself before Ruddjedet prior to the birth. Ruddjedet being identified to Reret taking up Bootes to Lyra and part of Lyra. Could Isis be her lunar form here? 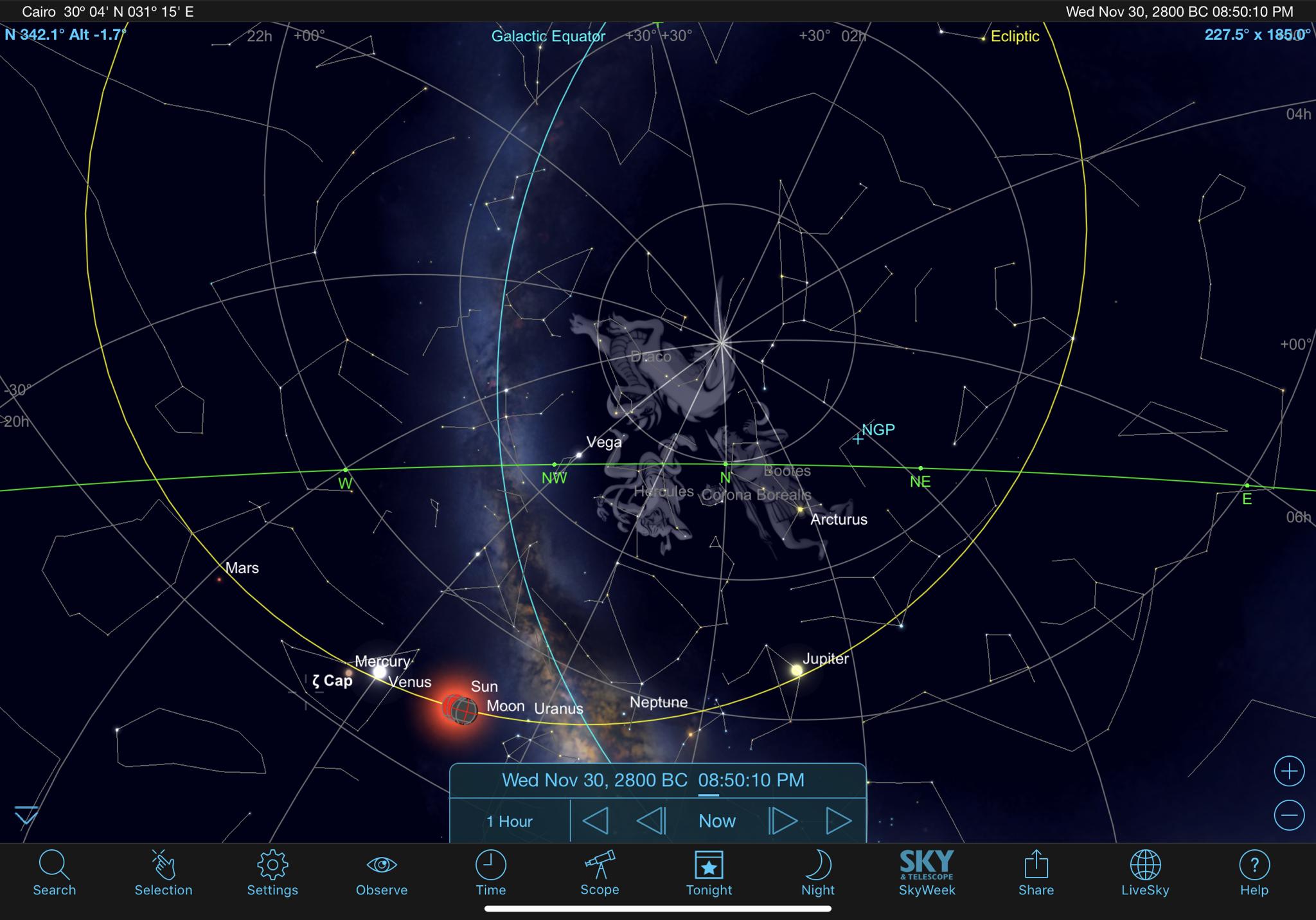