The Papyrus also tells us that the information Khufu seeks is to be brought by the eldest child:


Quote
Westcar Papyrus
'The eldest of the three children who are in the womb of Ruddjedet will bring it to you.'
Then His Majesty said:
'I want it! These things you say, who is she, this Ruddjedet?'
And Djedi said:
'She is the wife of a priest of Re, lord of Sakhbu, who is pregnant with three children of Re, lord of Sakhbu.
He has said about it:
"They will perform this magisterial office in this entire land.
The eldest of them will be high priest in Heliopolis." '


Quote
Quack
The normal order of the planets is Jupiter, Saturn, Mars, and then, after the triangle decans, Mercury and Venus. Such an arrangement differentiates between inner and outer planets, but otherwise does not follow an obvious astronomical criterion.

As such, if this is the order the Egyptians recognised the planets in terms of distance from the sun. Sahure would likely mean Venus in an interpretation that the children are the planets.

Moving to Keku. Keku is known as a god of darkness according to Budge, “Kekui represents that period of the night which immediately precedes the day”. Budge further notes that Kekui was at one point considered an Elephantine god identified with Khnemu which came about due to considering Kekui a personification of the Nile god Hapi. Budge also informs us that at Kom Ombo, Sebek (a crocodile god) was a personification of Kekui.

Quote
Quack
The name of Mercury, sbg.w, and due to phonetic developments later also swgȝ, is of to­ tally unknown meaning. There is a possible connection of this name with biblical Hebrew sekwi in Job 38, 36 where the word is used in parallelism with “Ibis” in connection with wisdom, and thus is likely to have a relation to the Egyptian god Thot (probably also present in phonetic rendering in this passage), who is the counterpart of Greek Hermes and Latin Mercury (Pope, 1973, p. 302; von Lieven, 1999, p. 125, note 261). An individual note in one subtype of images of this form, especially from the Ramesside Period, should also be mentioned. It is given for Mercury and says, “Seth in the evening twilight, a god in the morning twilight” (Neugebauer & Parker, 1969, p. 180). This implies that the iden­ tity of Mercury as an evening and morning star was recognized, even though he was eval­ uated somewhat differently from a religious perspective, depending on his phase.


This provides a possible linkage of Keku with the morning star of Mercury both through the function of representing darkness that immediately precedes daylight and through the similarity of the name Sebek phonetically with Mercury’s name sbg.w.

Now onto Userref. I have noted that User is a spelling of Osiris. According to Quack, Osiris has the strongest connection to Venus.


Quote
Quack
Venus is normally called either “the phoenix bird” or “the heron bird” and linked with the god Osiris.

Quack also notes that Achilles Isogog Chapter 17 links Jupiter to the Star of Osiris. Whilst also noting that there is little other textual support for this identification. If I accept Achilles identification as I have already used Venus in the identification of Sahure, then Userref is represented by Jupiter. There is some support in the later titles of Jupiter as opening the secret or illuminating the land:

Quote
Quack
The name of Jupiter is especially problematic in its transmission. In the astronomical de­ pictions making use of the main Senenmut family, probably also the Seti IC family, it is consistently written “Horus who bounds the two lands.” A subgroup of it, however (Se­ nenmut subgroup B), writes “Horus, the mystery of the two lands.” The New Kingdom members of the Seti IA family write “Horus who illuminates the two lands.” Late hiero­ glyphic sources give a writing which is ambiguous and could be understood either as “Ho­ rus who opens the secret” or as “Horus who illuminates the land.”


Thus in this reading we have:
Userref - Jupiter
Sahure - Venus
Keku - Mercury

This is the alignment of the planets in the October 28, 2638 BCE date previously presented (refer to: [grahamhancock.com] ) 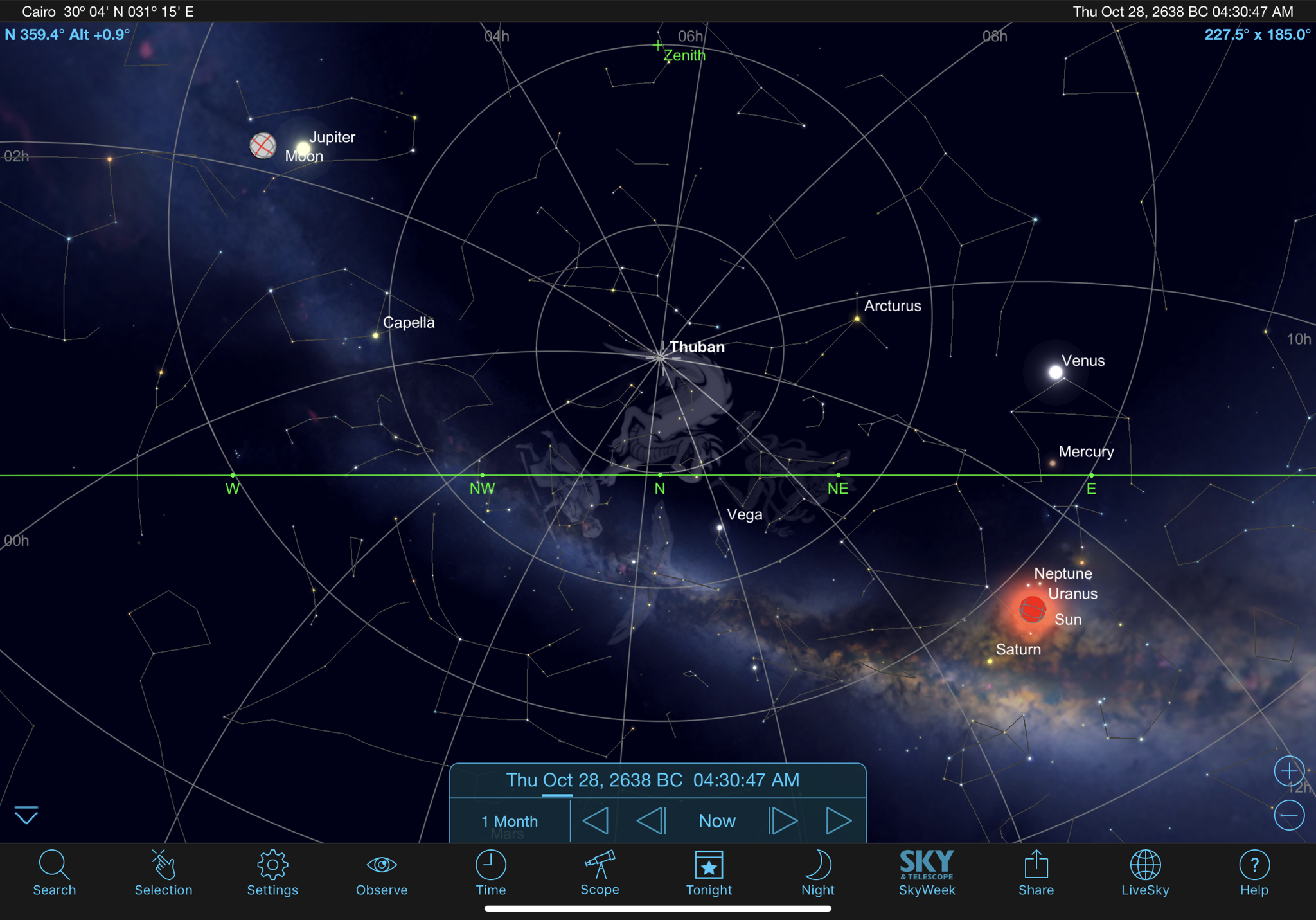