Mysteries :  The Official GrahamHancock.com forums
For serious discussion of the controversies, approaches and enigmas surrounding the origins and development of the human species and of human civilization. (NB: for more ‘out there’ posts we point you in the direction of the ‘Paranormal & Supernatural’ Message Board).
Welcome! Log In• Register
Go to: Forum Home•Board•New Topic•Search
Re: Unlocking the Westcar Papyrus with Egyptian Astronomy
Author: engbren ()
Date: January 17, 2020 09:34AM
Hi Spiros,

I disagree. If we start with the most secure constellations per Lull & Belmonte:

Lull & Belmonte attempt a location of the Hippopotamus but I think their identification may be wrong. They have selected Bootes but I think Ophiuchus may make more sense. The ceiling is labelled the constellations of the Northern sky yet the Lion and Bull when viewed in the Northern sky is upside down. Thinking about the purpose of the ceiling - to aid the deceased Pharaoh in the afterlife, he needs to travel from West to East for re-birth. The realm of the dead is the underworld and therefore I think the line is the horizon and the constellations are under the horizon. In this scenario, the right hand side (the hippopotamus) represents West.
If we start there, the Hippopotamus with crocodile on her back and mooring posts out front is best represented by Ophiuchus. Interestingly, Ophiuchus carries a Serpent and there is evidence from Hydra for a snake being seen by the Greek/Roman tradition where the Egyptians saw a crocodile. Serpens then potentially becomes her mooring post or dagger.

Anu the Avatar of Horus would be represented by Virgo. Bootes would then be holding Meskhetyu's reigns. Bootes in the modern tradition is known as a drover. Coma Berenice being the reigns.

This leaves Standing Man and Selkis to be identified. Either could be Cancer or Gemini. Cancer is thought to have been represented in the Egyptian tradition as a beetle. One of the theories about Selkis is that she is represented by a Water Scorpion (refer: [en.wikipedia.org]) rather than a regular scorpion. A Water scorpion resembles a beetle and therefore I argue that Selkis is likely Cancer, leaving standing man to represent Gemini.

Dates aside, Seti I ceiling:

Image Credit: Wikipedia
I think represents something like this: 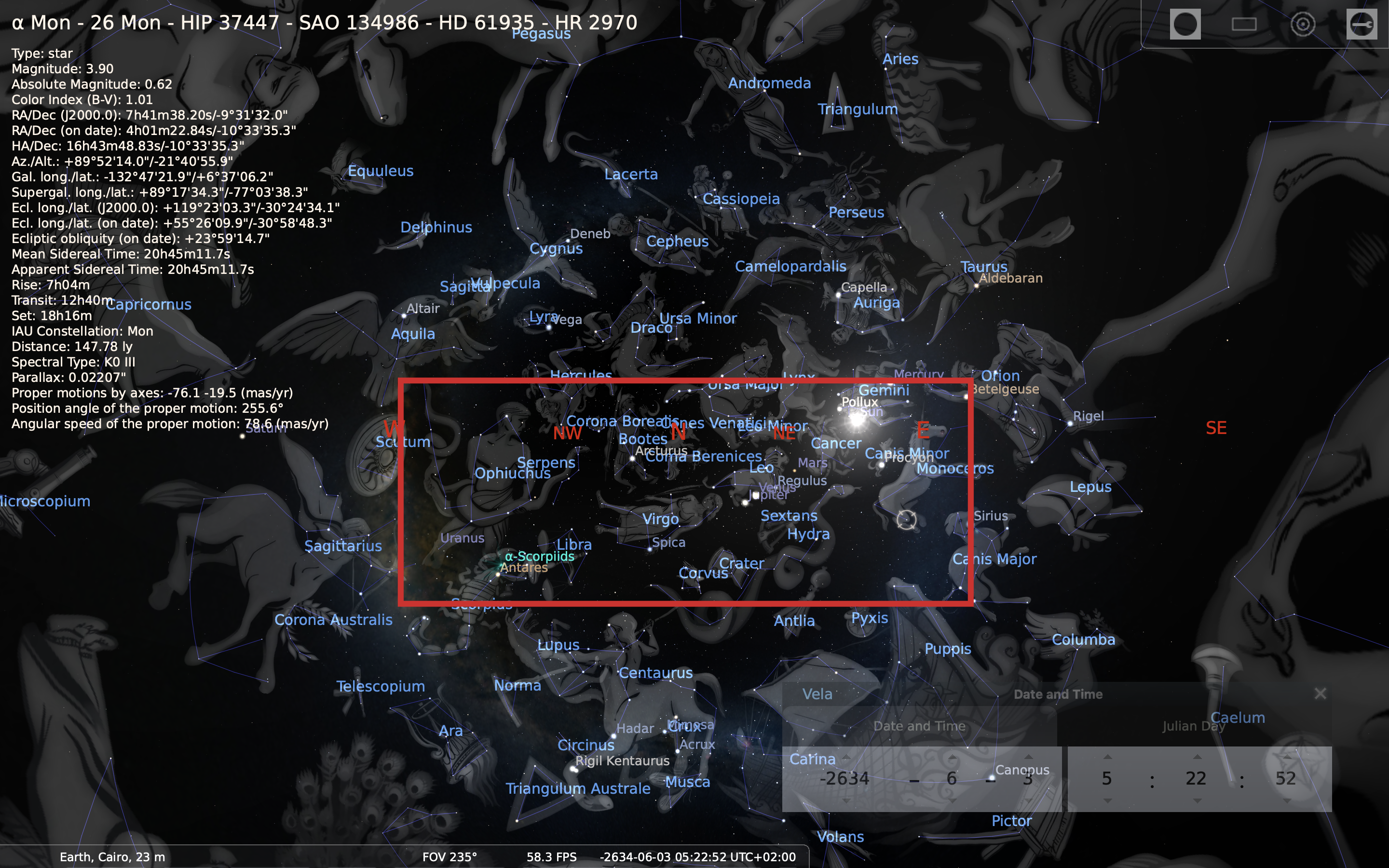