Mysteries :  The Official GrahamHancock.com forums
For serious discussion of the controversies, approaches and enigmas surrounding the origins and development of the human species and of human civilization. (NB: for more ‘out there’ posts we point you in the direction of the ‘Paranormal & Supernatural’ Message Board).
Welcome! Log In• Register
Go to: Forum Home•Board•New Topic•Search
Re: Unlocking the Westcar Papyrus with Egyptian Astronomy
Author: engbren ()
Date: October 29, 2019 08:55AM
I have been reviewing my interpretation of the story of Djadjaemankh as there was an element of the interpretation that wasn’t adding up. The fish pendant laying on a shard in a lake that Djadjaemankh folded over which had a depth of 12 cubits, 24 when folded. I had considered this specification of the depth of the lake to be indicative of an equinox, which would then allow us to date the story but this dating method yielded a date in the remote past that simply didn’t make sense.

A review of the divisions of time known in the Old Kingdom revealed that the civil calendar included days that were divided into 12 equal night hours and 12 equal daytime hours, every day. That is, the length of the hour varied depending on the season. This understanding means that an equinox is not assured and cannot be used to attempt to date the story. A change to the astronomy automation software I am using created a moment of discovery when an image of a ship arrived in the middle of the sky in my proposed date of the story of Djedi. That ship was the constellation of Argo.

Argo of course known to the Greeks but there is evidence albeit from a later time that Argo was known to Egyptians. This evidence comes from Plutarch who writes:

Quote
Plutarch
The Egyptians, in fact, have a tradition that Hermes had thin arms and big elbows, that Typhon was red in complexion, Horus white, and Osiris dark, as if they had been in their nature but mortal men. Moreover, they give to Osiris the title of general, and the title of pilot to Canopus, from whom they say that the star derives its name;
also that the vessel which the Greeks call Argo, in form like the ship of Osiris, has been set among the constellations in his honour, and its course lies not far from that of Orion and the Dog-star; of these the Egyptians believe that one is sacred to Horus and the other to Isis.


In my OP, I linked the fish pendant that lays on a shard to the constellation Piscis Austrinus. I wondered where the Argo was in relation to Piscis Austrinus and it is just below, to the side, below the horizon in what the Egyptians would have called the Duat. This raises the possibility that the stories of Djadjaemankh and of Djedi are are a recursive description of the same night sky. This would mean that the folding of the lake to find the fish pendant is indicating an understanding of the constellations in the sky and below the horizon (the Duat), fitting in with the variable hours of the night. 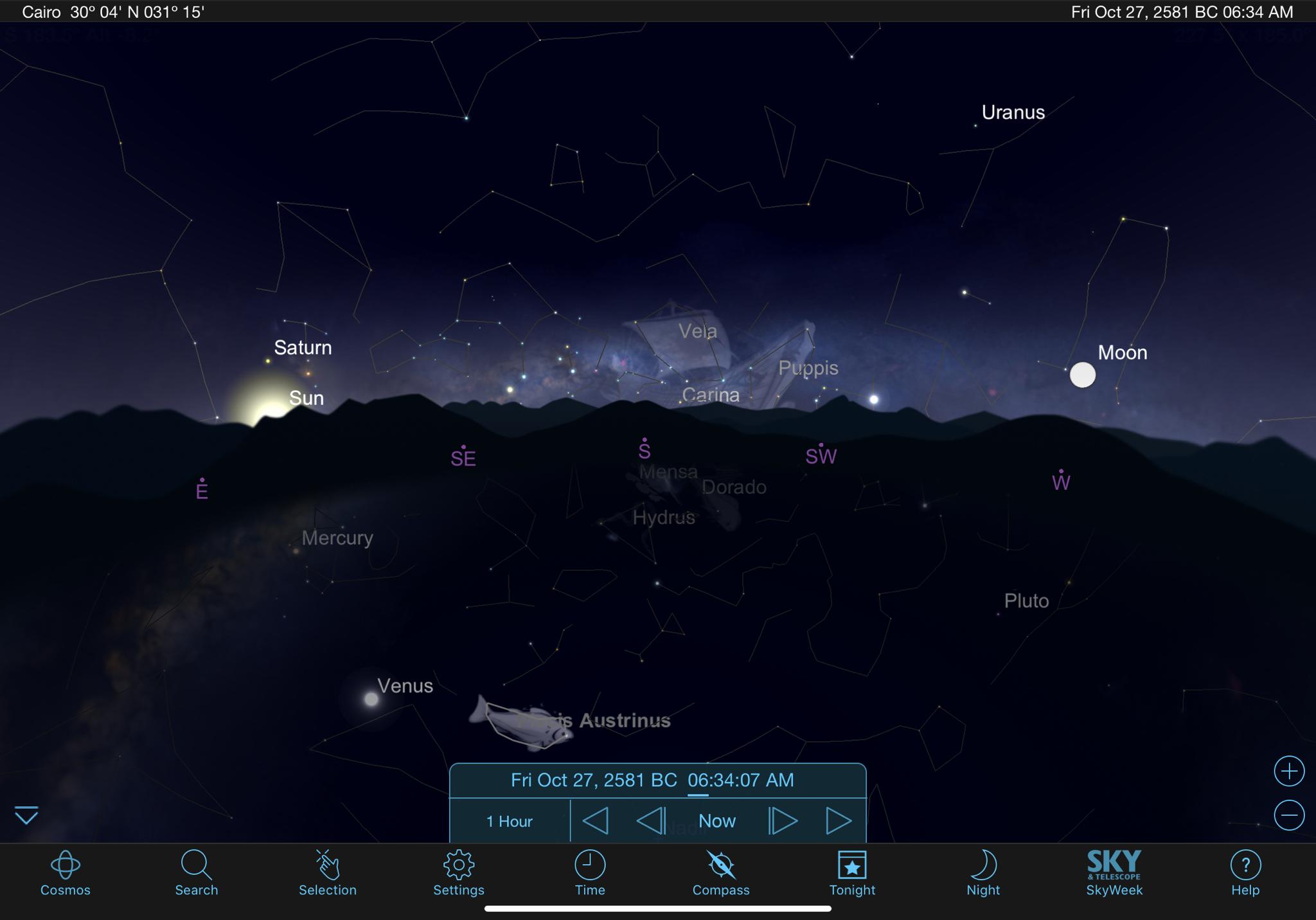 The story tells us that the rower that lost the fish pendant was the stroke for her side. The Hear The Boat Sing blog tells of at least one instance where the stroke is at the stern (rear) of the boat.


Quote
Hear The Boat Sing
Strong of arms, untiring when he took the oar, he rowed at the stern of his boat as the stroke-oar for two hundred men.


Looking to the rear of Argo, the Southern Cross or Crux appears which is a constellation known the Egyptians as the “Twins and Two Ladies” according to Table 6.1 in Lull and Belmonte. This gives us a clue as to who the rowers represent - the Two Ladies Wadjet and Nekhbet, or the twins Isis and Nepthys. The nets that were given to the rowers offer a clue - bead net dresses are known as far back as the Old Kingdom such as the example from the Museum of Fine Arts demonstrates. These dresses are particularly known in a funerary context which would point to the professional mourners Isis and Nepthys.
There is additional evidence the rowers symbolise Isis and Nepthys. Remembering that Sneferu specifies that the rowers have beautiful bodies that have not been opened by childbirth, the following instructions left by the priests for the performance of the Lamentations of Isis and Nepthys provide a match.

Quote
Lamentations
Now, when this is recited the place is to be completely secluded, not seen and not heard by anyone except the chief lector-priest and the setem-priest. One shall bring two women with beautiful bodies. They shall be made to sit on the ground at the main portal of the Hall of Appearings. On their arms shall be written the names of Isis and Nephthys. Jars of faience filled with water shall be placed in their right hands, offering loaves made in Memphis in their left hands, and their faces shall be bowed.

The Lamentations of Isis and Nephthys were also regularly performed in temples as part of services. The two young women, who were always beautiful virgins, sang the Lamentations to the accompaniment of tambourines and other musical instruments.


Immediately above Argo is the constellation Hydra which according to Table 6.1 in Lull and Belmonte, was considered the constellation htp rdwy our “Lying on his feet” which is a crocodile. The story before Djadjaemankh and the story after Djedi feature crocodiles that takes a villager, possible evidence of further repetitive or recursiveness within the stories of the Westcar Papyrus and lending further weight to the decoding of the date of Khufu designing his pyramid.

It may be time to update my OP.