Mysteries :  The Official GrahamHancock.com forums
For serious discussion of the controversies, approaches and enigmas surrounding the origins and development of the human species and of human civilization. (NB: for more ‘out there’ posts we point you in the direction of the ‘Paranormal & Supernatural’ Message Board).
Welcome! Log In• Register
Go to: Forum Home•Board•New Topic•Search
Re: The Age of Pisces or Aquarius?
Author: engbren ()
Date: September 22, 2019 12:32PM
To re-cap, I have been looking into the possibility that the story of Djadjaemankh, which is set as though in the time of Sneferu is depicting an Equinox. This line of thinking has been spurred by the depth of the lake that Djadjaemankh folds over to collect the rowers fish pendant being cited as 12 cubits and when folded as 24 cubits. If this is the case, then to decode which "age" the story belongs to, we need to understand the sign. I would argue the story tells us clearly that it is a fish - as the fish is found under the 12 cubits of water of the lake.
There are two possibilities available to interpret the fish - Pisces and Piscis Austrinus (PsA). According to Lull and Belmonte, Aquarius is also depicted as an Egyptian divinity: the god of the Nile, Hapi with a fish underneath the water-pouring Hapi. The fish under Hapi is taken to be indicative of the Mesopotamian fish KU and is identified to be PsA. Pisces is depicted in standard form as two fish. Here, the fact we are looking for a single fish links more closely with Piscus Austrinus or PsA.

There is an interesting linkage here. Aquarius pouring water on Picus Austrinus is representative of the Nile God Hapi, who is in turn a manifestation of the more ancient Khnum. “Khnemu was originally a water or river-god, and that in very early times he was regarded as the god of the Nile and of the annual Nile-flood, and as such he bore the name of QEBH” - Budge Gods of the Egyptians, vol 2, p50.

If we look at the astronomic year -43,500, we can see that on the March Equinox, PsA rises due East approximately 1 hour prior to sunrise. I have provided examples in both Westen and Egyptian Starlore below to show the case. In Egyptian starlore, you can see the boat and net constellations which I believe feature prominently in the story. 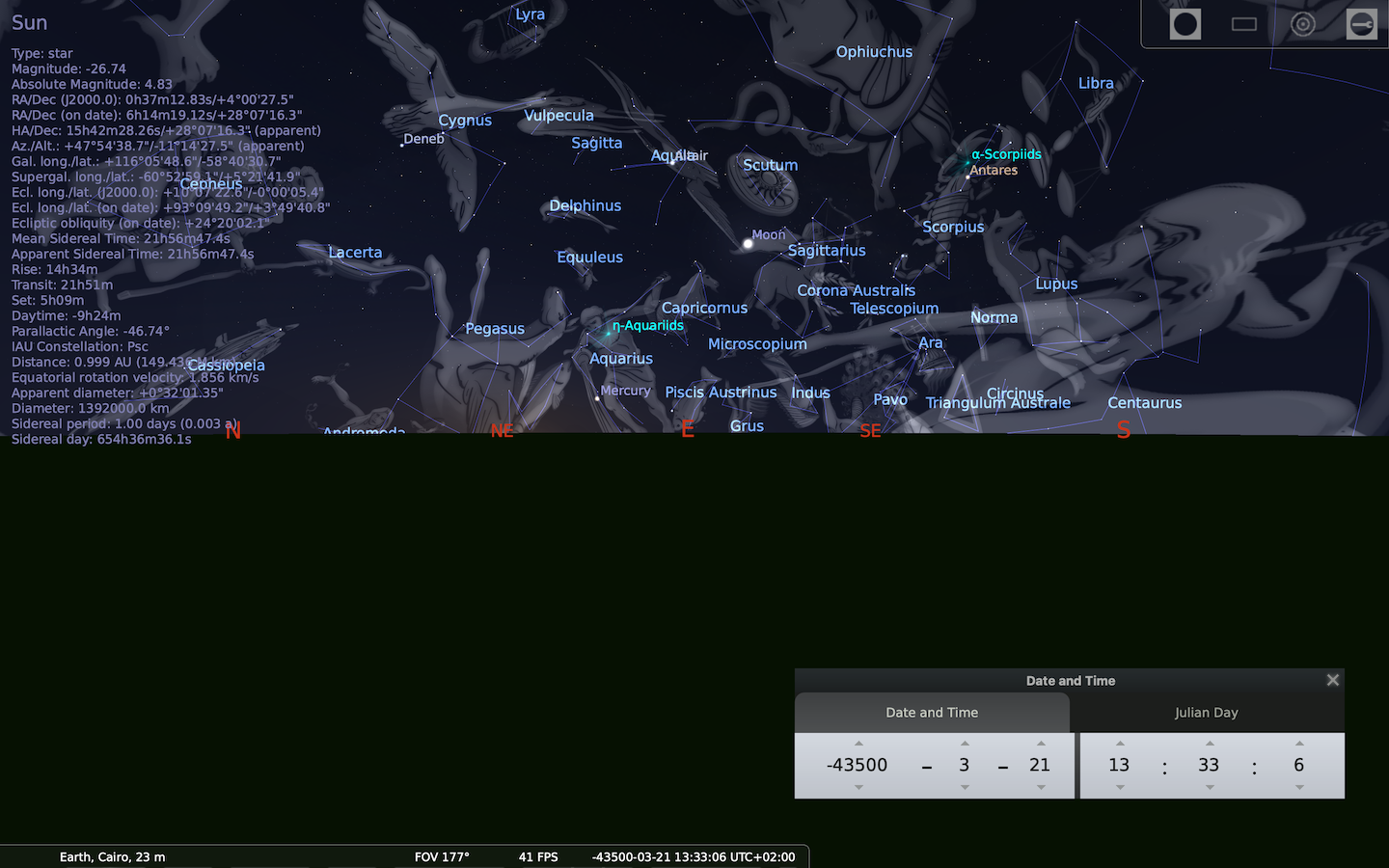 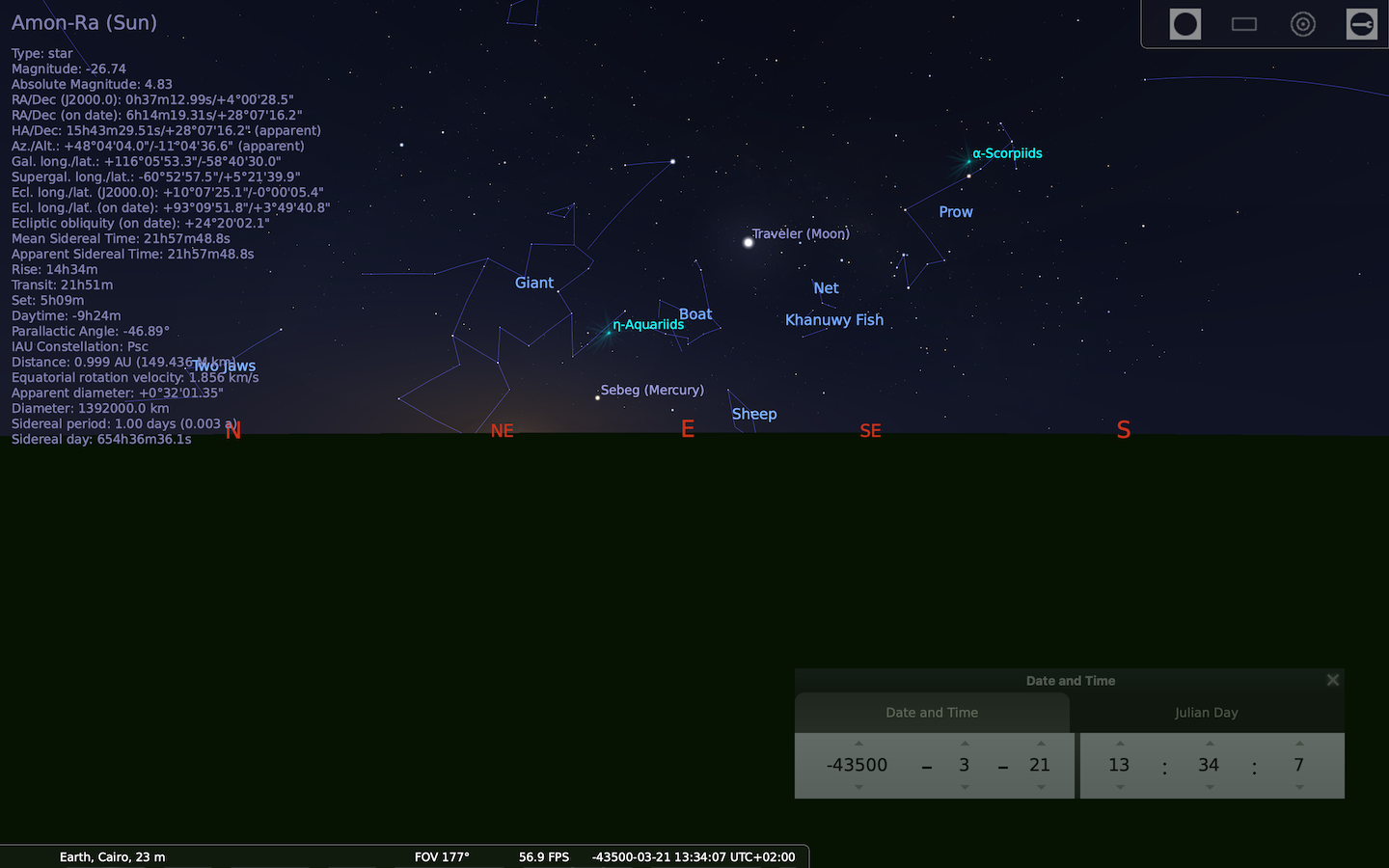 Interestingly, this corresponds to a period in which it is noted as a marker of change in culture in nearby Western Eurasia according to [www.egyptorigins.org]


Quote
Egypt Origins quoting Scientific American April 1993 Edition
Between 40,000 and 45,000 years ago the material culture of western Eurasia changed more than it had during the previous million years. This efflorescence of technological and artistic creativity signifies the emergence of the first culture that observers today would recognize as distinctly human, marked as it was by unceasing invention and variety. During that brief period of 5,000 or so years, the stone tool kit, unchanged in its essential form for ages, suddenly began to differentiate wildly from century to century and from region to region.


Could the Egyptians have pointed us to such a remote time as the birth of Khnum, the protector god of Khufu?