Mysteries :  The Official GrahamHancock.com forums
For serious discussion of the controversies, approaches and enigmas surrounding the origins and development of the human species and of human civilization. (NB: for more ‘out there’ posts we point you in the direction of the ‘Paranormal & Supernatural’ Message Board).
Welcome! Log In• Register
Go to: Forum Home•Board•New Topic•Search
Re: Unlocking the Westcar Papyrus story of the Wonder of Djadjaemankh
Author: engbren ()
Date: August 05, 2019 10:15AM
Putting this up as a side thread for now.

Khufu’s reign is believed to be 2589 BC - 2566 BC
We are told in the Westcar Papyrus that Khufu is interested in copying the ipwt of the House of Thoth for use in his own horizon. Ipwt has been translated as chambers, numbers or plans. Djedi tells Khufu the eldest of three boys born to Ruddjedet will provide the Ipwt to him.
We are told that Ruddjedet will give birth on the 15th day of the first month of growing season. Growing season generally translates to early January. I have assumed that the 15th day will correspond to the 15th day of the moon. Thoth is a lunar deity and as such, the house of Thoth will be the constellation that the moon is in at a particular time on that day.
Interestingly through the story of the birth of Ruddjedet, we are told one of the three children is Keku. Keku is the Egyptian god of darkness, specifically, the darkness that immediately precedes the daylight. Now we have the time of viewing of the moon. Is this the scene the story is describing: 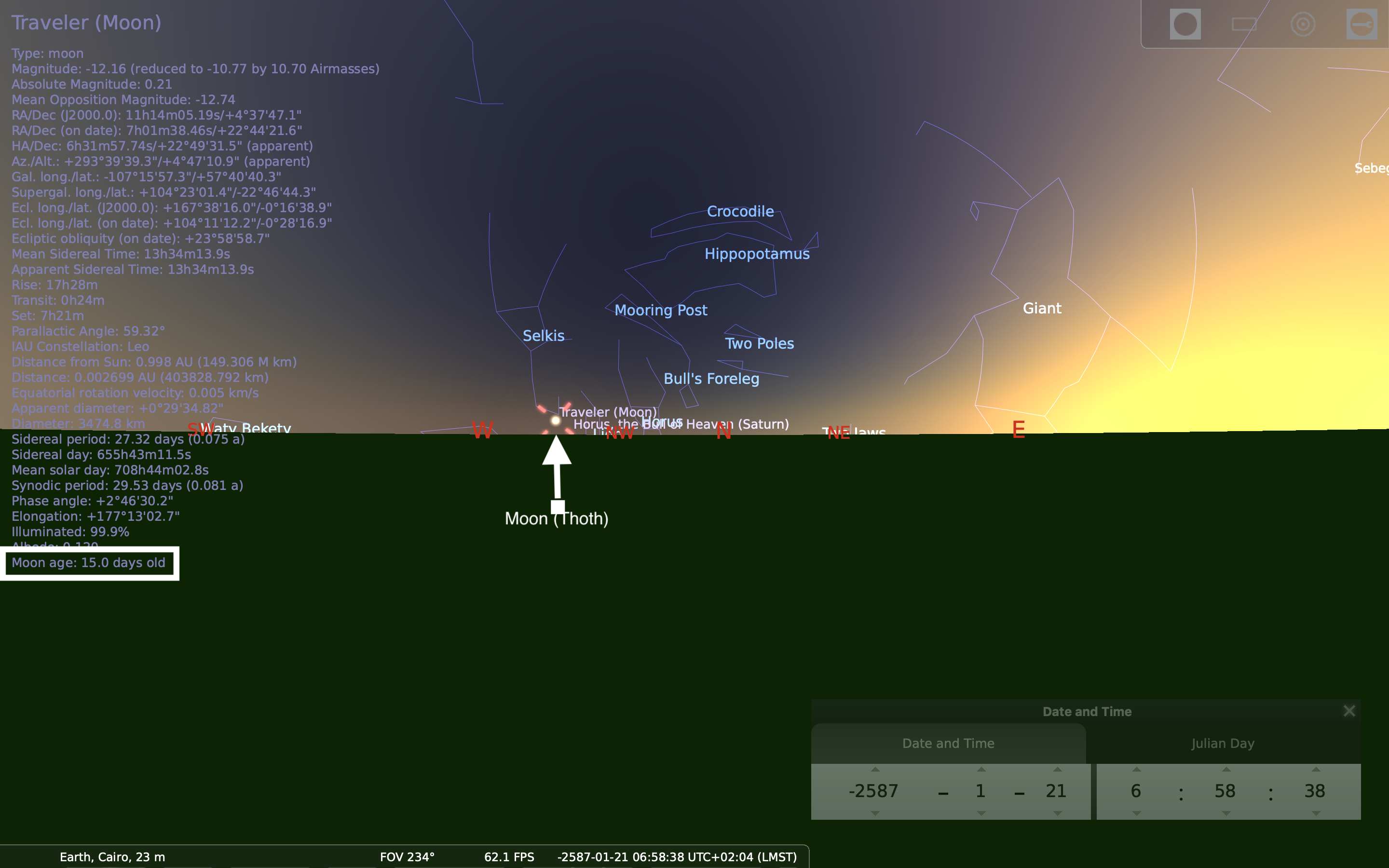 Note that the moon (Thoth) is in the Selkis constellation. Interestingly, for anyone that has studied the great pyramid, the star in Selkis (Sigma Leonis) that the moon is near is 220 light years away according to Stellarium. Given the baselength of the Great Pyramid is 440 RC, that is a remarkable coincidence.


Follow-up analysis
A further indication of Reusre’s connection to Osiris is the gift of barley that he gives to the gods:

Quote
Westcar Papyrus
“These gods then went out, having delivered Ruddjedet of the three children, and they said: 'Rejoice, Reusre, for three children have been born to you!' Then he said to them: 'My ladies, what can I do for you? Please give this barley to your bearer, and accept it as a tip.’" - Nederhof


According to Smith, Osiris is associated to barley which is regarded as having sprung from his body and through imagery where Osiris says “I am barley”. With the connection to barley and the similar spelling to Osiris’ Egyptian name there appears to be a significant case to argue that Reusre is a personification of Osiris and should be connected to Sah.
It is important to identify the children appropriately as in the story of Djedi, Djedi tells Cheops/Khufu that the eldest of the three children will bring him the number of chambers of the sanctuary of Thoth:

References
Nederhof, Westcar Papyrus accessed from [mjn.host.cs.st-andrews.ac.uk]
Lull and Belmonte, The Constellations of Ancient Egypt, accessed from [www.iac.es]
Smith, G. Elliot, In The Beginning The Origin Of Civilization, 1932, pp 87-88
Budge, EA Wallis, The Gods of the Egyptians, Methuen & Co, 1904, pp 285-286