Mysteries :  The Official GrahamHancock.com forums
For serious discussion of the controversies, approaches and enigmas surrounding the origins and development of the human species and of human civilization. (NB: for more ‘out there’ posts we point you in the direction of the ‘Paranormal & Supernatural’ Message Board).
Welcome! Log In• Register
Go to: Forum Home•Board•New Topic•Search
Re: Egyptology debate
Author: Thanos5150 ()
Date: April 07, 2019 04:37PM
eyeofhorus33 Wrote:
-------------------------------------------------------
> The Nabta Playa calendar circle suggests a
> pre-dynastic civilisation with an astronomical
> knowledge and interest, stretching back to at
> least the fifth millennium BCE though the region
> had been populated for millennia by then, so no,
> the dynastic Egyptians didn't suddenly develop an
> interest in precession out of nowhere but perhaps
> inherited a body of knowledge that arguably
> stretched back millennia by then.

The amazing and mysterious megalithic site of Nabta Playa: 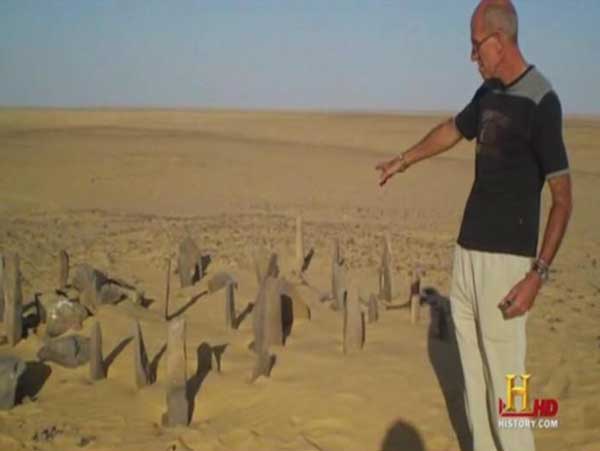 > Edited to add: Astrophysicist Thomas G. Brophy
> suggests the hypothesis that the southerly line of
> three stones inside the Calendar Circle
> represented the three stars of Orion’s Belt and
> the other three stones inside the calendar circle
> represented the shoulders and head stars of Orion
> as they appeared in the sky. These correspondences
> were for two dates – circa 4800 BCE and at
> precessional opposition – representing how the
> sky "moves" long term. Brophy proposes that
> the circle was constructed and used circa the
> later date, and the dual date representation was a
> conceptual representation of the motion of the sky
> over a precession cycle.

Brophy also proposes these people, neolithic nomadic cattle herders, were aware of a galactic map whose information may have been given to them in some way by aliens.

Other Brophy chestnuts, with Bauval, are Black Genesis and Imhotep the African: Architect of the Cosmos