Mysteries :  The Official GrahamHancock.com forums
For serious discussion of the controversies, approaches and enigmas surrounding the origins and development of the human species and of human civilization. (NB: for more ‘out there’ posts we point you in the direction of the ‘Paranormal & Supernatural’ Message Board).
Welcome! Log In• Register
Go to: Forum Home•Board•New Topic•Search
Checkmate!
Author: Scott Creighton ()
Date: February 28, 2019 10:31AM
So in his self-published book, Martin Stower states that Colonel Vyse's private field notes "...were of no help in the research: even a cursory inspection was enough to show me that the handwriting was effectively illegible."

So, rather than spending the time to familiarise himself with Vyse's (admittedly) difficult handwriting, Stower instead reverts to the Colonel's published account; the sanitised version of his time at Giza; the heavily edited and much redacted version of events; the version that directly, in many places, contradicts his private account. How so very convenient.

But here's the thing - you do not need to be able to read Vyse's actual handwriting in order to read the hieroglyphics he has placed in a number of places throughout his journal. Those hieroglyphics are very clear and they raise sufficient suspicion all on their own to bring Vys'e alleged 'discovery' into question. But then you wouldn't want to present your readers with such information Mr Stower because you have previous form in withholding important hieroglyphic information from Vyse's private notes, don't you.

To leave out this material - Vyse's private notes - is a complete dereliction of duty. Any true researcher of history writing such a 'book' as you and Hermione have done would have leapt at this material. But not you guys - too awkward. Because you are a coward, Martin Stower. "Gut me like a fish"? That's hate speech and can be reported to the police, you know. Your 'book' has just been filleted by my actual evidence so I rather doubt you'd be able to even pick up a knife let alone use it.

Now, the fair-minded reader here will, I'm sure, see from my transcription of Vyse's handwriting that it is entirely possible, with time and patience, to read these pages. Yes there is the odd word here or there that is uncertain but that, by and large, I have given a reasonable transcription of the passage. If Vyse's handwriting was illegible (as Stower claims) then I would not have been able to have done so. Admittedly it has taken time for my proficiency in reading Vyse's pen to reach this level. But in the two years since HOAX was published, my increased proficiency leaves me with very little doubt that the small passage I transcribed and presented in HOAX is correct.

That is why I am confident that the passage Stower (who say he cannot read Vyse's handwriting) has claimed reads " : in it was written "Campbell's Chamber, May 27, 1837" is quite wrong. It's a clumsy expression and not in keeping with Vyse's style. Furthermore, these guys were spending their initial visit inspecting the chamber, measuring it. As with the other chambers they would have had to allow the dust to settle from the blasting and the other examples we have, the inscription of Wellington and Nelson were made at least a day after each chamber was opened. Given their previous actions, they would not have painted that inscription into that chamber on the 27th, the day of the blasting. The statement is a 'sign-off' comment after he has given his description of the chamber " : as it was within Campbell's Chamber, May 27, 1837". It's not "written" (there's not two 't's), it's "within" ('th').

Now back to my transcribed Vyse text - the reason why Vyse made no reference to the painted quarry marks in Campbell's Chamber during his initial inspection is because, quite simply, there were no quarry marks extant within the chamber at that time - they had yet to be added. Which brings us to the follow-on passage from May 27, 1837 in which Vyse writes: 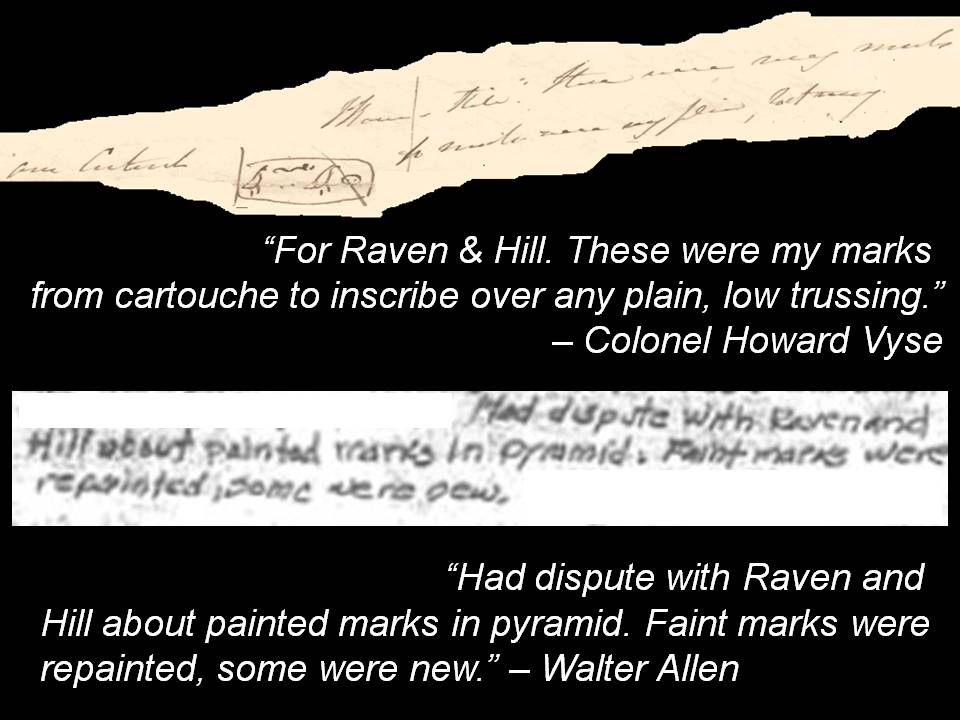 That is not "HRaven", Stower. Go and have a look at how Vyse writes his capital 'H' - he always uses a horizontal stroke through the H (check, for example, the way he writes the name 'Hill'). It reads "For Raven & Hill". Your contention that this passage reads "There were many marks and [a] cartouche [cartouche drawing] the marks were very plain, " is utter bunk on so many levels. It is as well that you have conceded that you cannot read his writing but that doesn't stop you attempting to do so when it doesn't say what you want it to say. You can't have it both ways, Stower. Where's the fullstop at the end of "cartouche"? Where's the capital 'T' at the start of 'The marks were"? Do you not notice the word you have as "marks" bears only a passing resemblance to the word "marks" on the line above? Do you not notice this word actually has an 'i' & 'b' in it? The word is not "marks", Stower - the word is "inscribe"; "cartouche to inscribe" Mr Stower i.e. future tense. He does not say he found the marks or cartouche "inscribed" (past tense) but "to inscribe" (future tense).

Your 'book' is bust, Stower and so is your entire argument.

And a few further points before I depart this discussion, Mr Stower. It rather seems to me that your long-awaited tome is still hot on the press and already is in need of a serious re-write.

1) My views with regards to the two cartouches of Khufu are no longer how you have presented them in your book.

2) Roth's paper - Mr Stower, you present that paper as though it is accepted Egyptological fact. Her ideas with regards to the pyramid work crews are but a theory, Mr Stower. Go through her paper and count the number of 'maybe', 'perhaps', 'could be', 'might be' 'possibly' etc and you will see just how tenuous her ideas are.

3) Daoud digging secret tunnels, finding hidden caches of paired quarry marks!! Whose febrile imagination did this turd of a strawman come from? I have said in a number of places that the "secret cache" could have been found painted onto some blocks in the rubble around the pyramid. We know for a fact that Vyse found a stone with a partial Khufu inscription on it on the north side of the GP. He may well have found blocks with painted Khnum-Khuf crew name on the pyramid's south side (and perhaps also some Horus names there). So he sees a pattern - Khufu ones found at the pyramid's north front, Khnum-khuf (and Horus) at the pyramid's south front. He finds nothing for the east and west (didn't look hard enough). So he simply decides to paint the marks north and south of the chambers with the 'pairs' extending to the south-east-west and north-east-west. Simple.

So - looks like you've a lot to be getting on with now in updating your 'book'. Get to it. Chop chop.