Mysteries :  The Official GrahamHancock.com forums
For serious discussion of the controversies, approaches and enigmas surrounding the origins and development of the human species and of human civilization. (NB: for more ‘out there’ posts we point you in the direction of the ‘Paranormal & Supernatural’ Message Board).
Welcome! Log In• Register
Go to: Forum Home•Board•New Topic•Search
Re: Great Circles and Small Circles and Easter Island
Author: Dr. Troglodyte ()
Date: May 21, 2019 06:30PM
Horatech Wrote:
-------------------------------------------------------
> WHAT ROT! Dr Trogolodyte,
> Just drag a line from the East end of that "Boat
> Pit" to Easter Island and note the heading.
>
> You are playing with grains of sand at the Boat
> Pit end.
>
> You need help!
> CONTACT GOOGLE.

As qualified in the Reply Post Great Circles and Small Circles:


In this instance, the three points were of your choosing. These points are approximately connected by a line on Google Earth, as they represent three points on a ‘Small Circle’. Unfortunately, for your position, the “heading” [more correctly, Bearing] is not as you described.

In the quoted Post above you provided the following data:

Previously, you posted the image below with the following references [right to left]: Note: My calculations utilized the midpoint of the Boat Pit’s ‘centerline’, as the “East Side” was not mentioned in the quoted information employed in my above referenced Reply Post to MDaines. The difference is approximately 22 meters (72 feet); negligible across the stated distance of 16,170 km…“grains of sand” notwithstanding…

The second datum, referenced only as ”NASCA” [Nazca], is an ill-defined location. It is recognized as ”a city and system of valleys on the southern coast of Peru”. [see: Wiki] While not mentioned explicitly, the only conceivable relevance to the current discussion is to the “Nazca Lines”, which lie approximately 24 kilometers (15 miles) to the west-northwest of the municipality.

With these three points, two Google Earth maps were generated to determine the individual arc segment bearings (note the published bearings); the first is from the center point of Khufu’s Causeway Boat Pit to the coordinates of the Nazca Lines [264.77°]: 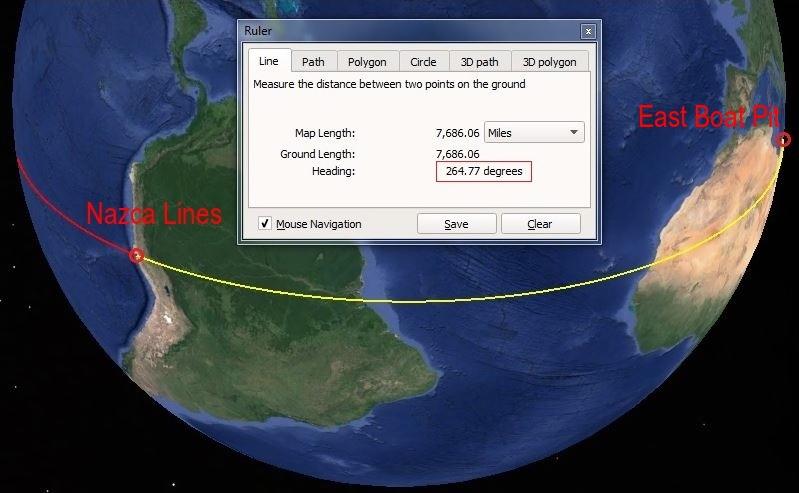 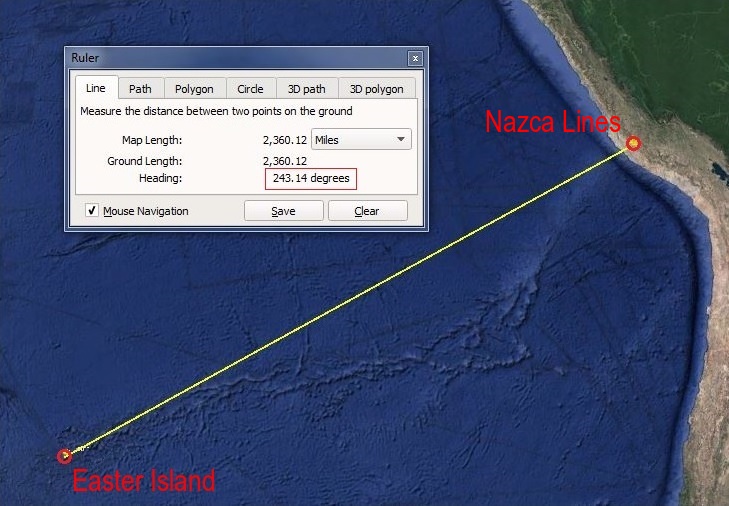 One last point of paramount consideration is the matter of ‘relevance’. Even if the proposal were not prima facially specious, what would be the significance of relating the constructions of Khufu (+/- 2589–2566 B.C.), the constructions of the Nazca people (+/- 100 B.C.-A.D. 700), and the constructions of the Polynesian inhabitants of Easter Island (+/- A.D. 1100–1680)? These three cultures differed not only in great distance, but also in great spans of time. The ‘relevance’ they each share is the characteristic nature of creative, industrious, talented humans; ’three points on a Small Circle’.