Mysteries :  The Official GrahamHancock.com forums
For serious discussion of the controversies, approaches and enigmas surrounding the origins and development of the human species and of human civilization. (NB: for more ‘out there’ posts we point you in the direction of the ‘Paranormal & Supernatural’ Message Board).
Welcome! Log In• Register
Go to: Forum Home•Board•New Topic•Search
Midpoint Sunrise-Sunset
Author: Dr. Troglodyte ()
Date: March 04, 2019 11:56PM
MDaines Wrote:
-------------------------------------------------------
> Dr Trogolodyte writes “The Causeway and boat
> pit/grave share parallel alignment with a specific
> sunrise date:”
>
> It must have been a very important sunrise to have
> had such an influence if that was indeed the
> reason…where the route leading up to the great
> monument must be at such a particular angle rather
> than directly east. If I understand correctly
> from your diagram, it’s given as April 18th. Is
> that significant? I have probably missed something
> or misunderstood.
> For the moment, that doesn’t appear to rule out
> an earthly reason for the boat pit and causeway
> orientation. So my question – which is very
> different – remains in play. Has anyone checked
> to see where that orientation might place the
> origin of the ship….if it arrived across ground
> from the east!
> As for the chicken and the egg, far be it from me
> to suggest that the boat pits preceded the
> monument along the perimeter of which two of them
> lie. That would be ridiculous. But the question of
> age is not really important here. Whichever came
> first, the causeway and the third boatpit share an
> orientation that might or might not be of
> importance for reasons other than practicalities.
> I'm curious about the ship. The causeway can come
> along for the ride.
> Madeleine

Apologies for not replying sooner; I have revisited my earlier referenced Post to amend and amplify my previous observations.

With specifics to our discussion, I updated the image relating the three (3) Causeways and their modern Gregorian dates. Note that the 18APR date for Khufu’s Causeway has been amended to 21APR/22AUG.

Regarding your query: ”Has anyone checked to see where that orientation might place the origin of the ship….if it arrived across ground from the east!”; in a manner of speaking, the funeral barge transported the King from the east (land of the living) to the west (land of the dead).

It should now be clear that the three (3) Giza Pyramid Causeways align with significant solar phenomena. Khufu’s Causeway is aligned with the midpoint between the June Solstice and the March/September Equinox sunrises, as observed from the threshold of his Pyramid Temple. A lesser known phenomenon of Khufu’s Pyramid is its function as a gnomon. For approximately fifteen (15) seconds, at sunset on the day of the midpoint between the equinoxes and the solstices, a pair of triangular shadows appears on either the north or south face, heralding the event. Below is the occurrence during an April or August event: 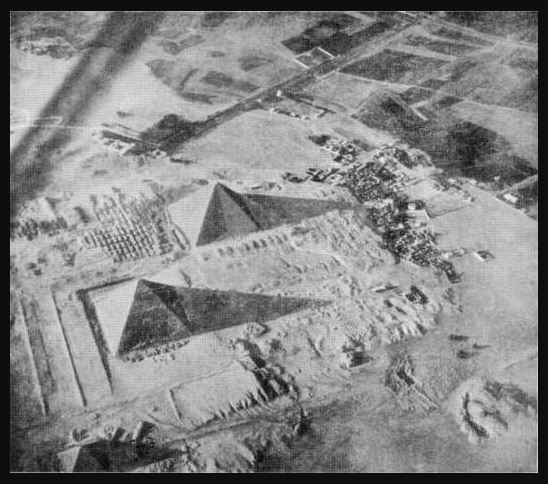