Mysteries :  The Official GrahamHancock.com forums
For serious discussion of the controversies, approaches and enigmas surrounding the origins and development of the human species and of human civilization. (NB: for more ‘out there’ posts we point you in the direction of the ‘Paranormal & Supernatural’ Message Board).
Welcome! Log In• Register
Go to: Forum Home•Board•New Topic•Search
Re: A Big Ask
Author: Barbelo ()
Date: February 26, 2019 08:23PM

Quote
So my question – which is very different – remains in play. Has anyone checked to see where that orientation might place the origin of the ship….if it arrived across ground from the east!


Firstly, no ships have been discovered in the three Eastern boat pits. But, then there is no sign of Khufu in the Great Pyramid, but it has been accepted by many that he once was.

I agree that these three excavations are quite different from the major boat pits on the southern side and may not be contemporaneous with the GP. They could be earlier or later.

I doubt that the orientation of the boat pits could cast any light on their origin. Two of them face N/S and the third respects the causeway which does not face due east and also doglegs towards the north after exiting the plateau.

They may have arrived from the "east" if you are using the term "east" as a general direction.

The Khufu causeway should be considered in the context of one of three which may have significance with regard to certain solar positions. The fact that the third boat pit respects this causeway indicates that there may be a connection.

The boats, if they existed, could have been brought up the causeway in a funereal procession or from any other direction. They could have been intact or disassembled. Evidence exists for both scenarios at other locations as well as Giza.

The AEs are well known for disassembling their boats for ease of transportation across desert areas. I doubt that Khufu required more than one boat. He may not have required even that.

My guess is that the "solar boats" may also have a connection with the Pacific Ocean. 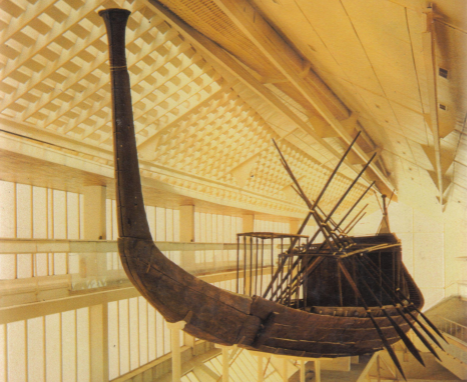