Mysteries :  The Official GrahamHancock.com forums
For serious discussion of the controversies, approaches and enigmas surrounding the origins and development of the human species and of human civilization. (NB: for more ‘out there’ posts we point you in the direction of the ‘Paranormal & Supernatural’ Message Board).
Welcome! Log In• Register
Go to: Forum Home•Board•New Topic•Search
Re: A Big Ask
Author: Dr. Troglodyte ()
Date: February 26, 2019 05:14PM
MDaines Wrote:
-------------------------------------------------------
> “This Topic is far more complex than it may
> appear; where to begin?”
>
> Thank you for that, Dr Troglodyte. You title this
> ‘A big ask’ but that was not my intention. I
> can well imagine that it is yet another vast
> subject if just a general question on boat pits,
> not forgetting that stone ships as burial sites
> were important far beyond the land of Egypt. Where
> to begin and where to end? I have the same
> dilemma with trying to understand and explain what
> the Sumerian symbols have to tell us about that
> ancient history.
>
> I wanted to concentrate on the three ships because
> they are so obviously different from the rest and
> because it’s also obvious that the eastern
> direction, the rising sun, is of the utmost
> importance. The two much smaller oblong pits on
> the same side may well have their importance in
> that pattern but appear to relate directly to
> smaller structures. I have the numbers three and
> five showing up in relation to this question -
> which is an offshoot of my overall linguistic
> investigation. So, I really don’t know.
> The only question that I can think of now is this:
> Might the orientation of the boat that follows the
> causeway give an indication of its owner’s place
> of origin? In other words, as it’s skewed in
> comparison to the others, would a line drawn from
> it cross any place of significance to the east? I
> have no idea if this has been done or if it is
> relevant. That the boat pit is there because the
> causeway is there seems to me to be unproven,
> perhaps true but unproven (?). And, of course, I
> wouldn’t dream of putting the screws on anyone
> to get an answer!
> Madeleine

The Giza Causeways’ solar relationship has recently been addressed here, and here.

The Causeway and boat pit/grave share parallel alignment with a specific sunrise date: 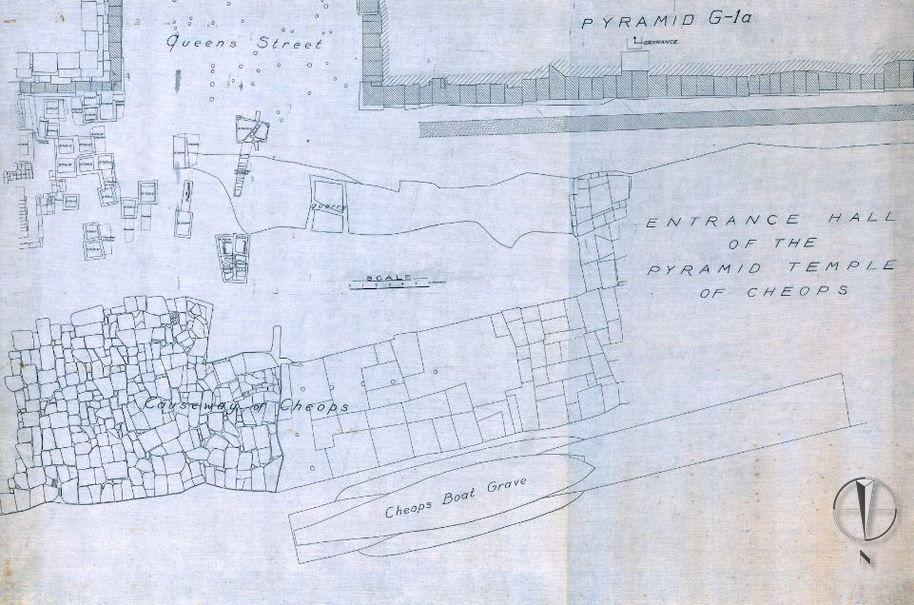 Had the Causeway’s boat pit/grave location been established foremost, the placement of Khufu’s Pyramid, Mortuary Temple and Causeway would have, of necessity, been established subsequent to that primary event; possible, not plausible. Chicken and egg…